The Canucks headed into Ottawa on the high of a come from behind win against John Tortorella and the Columbus Blue Jackets. It was a game they were lucky to win.

Tonight, the shoe was on the other foot, as the Canucks deserved 2 points, but came away with nothing, losing 3-2 to the Ottawa Senators on Canadian Armed Forces Appreciation Night.

I’m not sure if I’m willing to give our new Minister of National Defence a pass on this one. 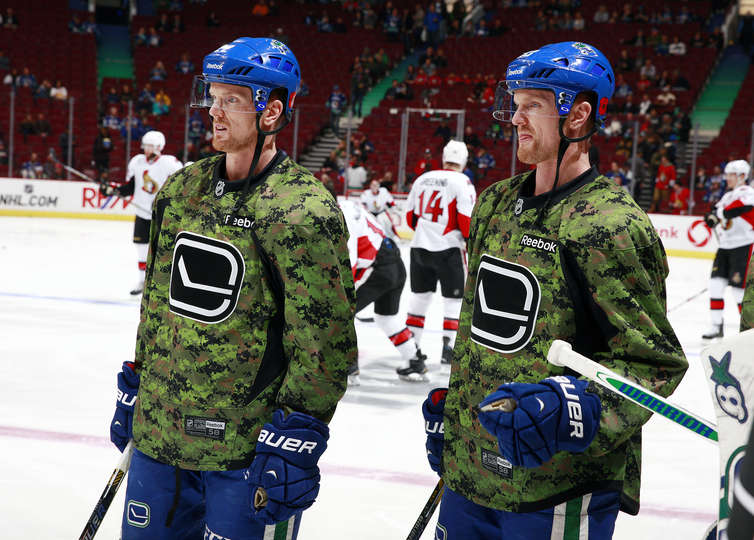 Time to get a Canucks version of that jersey, Harjit.

#Canucks have lost all 10 games this season by 1 goal. No team in NHL history has ever accomplished that feat to start a season.

The advanced stats gurus always say that winning a lot of games by one goal is typically a sign that you’re getting lucky, and sooner or later, your luck will run out.

Well, hopefully for the Canucks, sooner or later their un-luck will run out.

The Canucks became the first team in NHL history to lose their first 10 games of the season by just one goal. The numbers are skewered by 3-on-3 overtime of course, with Vancouver losing five times in the extra period, but that’s still a tough pill to swallow.

2. Some numbers to ponder

Like I mentioned in the intro, the Canucks deserved better tonight. They outshot the Sens 35-25 and carried most of the play at 5-on-5. Vancouver also had the edge in shot attempt differential at even strength tonight, 52-32. They were the better team, but weren’t able to convert enough chances.

The Canucks had 19 shots on goal in the second period, but couldn’t beat Andrew Hammond.

Sedinery was on display, but they lacked a goal to cap off their sustained pressure in the offensive zone.

As for ice time, Willie Desjardins kept it pretty even tonight. Jared McCann (11:31) played the fewest minutes of any Canucks forwards, while Daniel Sedin (18:46) played the most. Alex Edler (23:30) had the most minutes of any defencemen, while the rest of the blueliners played between 17:46 and 20:26.

I’m happy with that distribution, although it’s a bit puzzling that Matt Bartkowski (20:26) saw the ice more than Chris Tanev (19:39).

Perhaps that says something about Tanev’s finger injury that he’s battling through.

3. Baertschi heads to the net

Let’s talk about something positive now!

Sven Baertschi got his second goal of the season tonight, and it was scored in a manner that is likely to make his coach very happy.

Rather than setting up to receive a pass on the perimeter, Baertschi drove hard to the net, and was rewarded. There was some debate at whether Baertschi touched the puck or if it went off a Senators skate, but either way, Baertschi’s willingness to go to the net was the main reason the puck went in.

Baertschi is only 23, but this will likely be his only season where he will be gifted opportunities by the organization. Essentially, he’s this year’s Linden Vey, hopefully with a better end result.

Don’t get me wrong, I haven’t minded Baertschi’s play thus far, but if he doesn’t produce this year, he’ll be in trouble. He has 7 points in 14 games so far.

Critics of Baertschi is his willingness to play in the tough areas. Baertschi-backers will point to his positive underlying numbers. Sounds a lot like the great Mason Raymond debate of 2010-2013.

Let’s hope that Baertschi does all he can to never let me compare him to Vey and Raymond ever again.

The power play was the talk of Canucks nation heading into this game, and that’s likely to continue.

Alex Edler eventually ended the team’s 0-for-18 slump with the man advantage with 24 seconds left in the game. It was a bad angle goal scored off the rush at 6-on-4, so it wasn’t your typical power play goal, and I’m not sure if there’s much to build on there.

Much of the discussion on how to fix the Canucks’ power play centres around personnel decisions (Alex Burrows replaced Yannick Weber on the first unit tonight), but perhaps it should centre around tactical play.

The Canucks had a chance to tie the game up with the man advantage midway through the third period.

The closest Vancouver came to scoring on that power play came on what looked like a set play between the Sedin Twins and Alex Burrows.

Loved this one touch passing play by Sedins and Burrows. pic.twitter.com/7tl9f4NQBO

Ryan Miller has provided the Canucks with consistent, reliable goaltending this year. That’s why the Sens’ third goal, the eventual game winner, surprised me.

The puck may have tipped off Derek Dorsett, or at the very least, Dorsett’s attempted kick save may have distracted Miller just enough. Either way, it’s a goal Miller shouldn’t let in.

There is a long version of the answer, but all you need to know from Miller about GWG…
"I blew it."

It also came on the heels of a mini-controversy between Miller and TSN’s Ray Ferraro. Ferraro, and others, have suggested that Miller’s equipment (notably his pants), are oversized.

Cue the joke about his glove not being oversized… 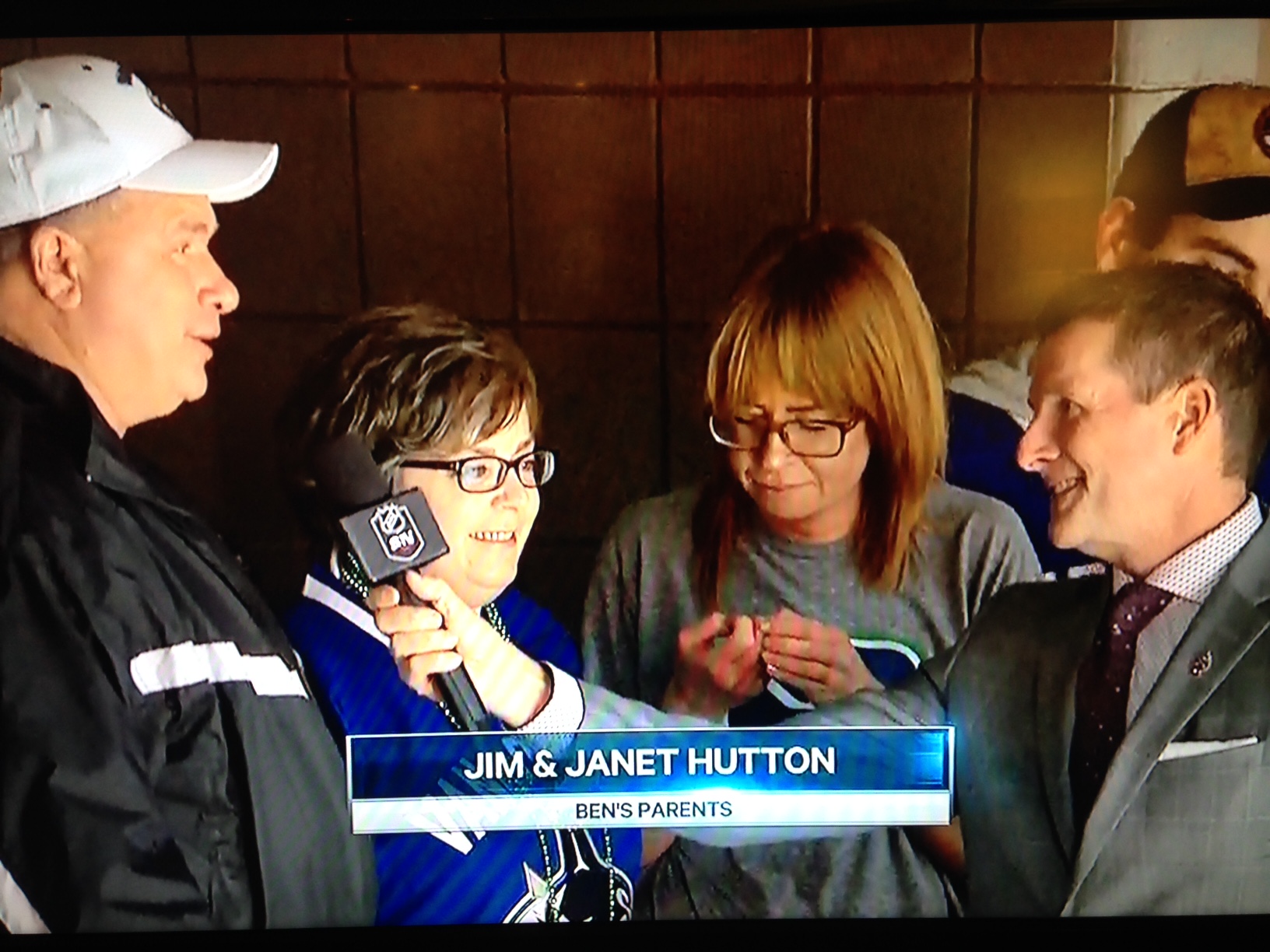 Is there anything more heartwarming than watching the proud parents of an NHL player playing in his first season?

Ben Hutton was playing in his hometown for the first time, and his parents couldn’t have been more proud.

No matter how many times I see a story like this, it’s awesome every time.

The Sens took it a step further, showing Hutton on the big screen. Pure class.

Classy move by Sens to show local product Ben Hutton on the big screen and play "Big League" during a stoppage in play.

As for Hutton’s play on the ice, he was very good as usual. He was calm and cool under pressure, finishing with a team high +18 even strength Corsi rating.

Willie Desjardins isn’t piling too much responsibility on him yet, which is probably a smart move at this point for the rookie, but it’s only a matter of time for Hutton. By next season I could easily see Hutton as a top-4 defenceman and a fixture on the first power play unit.

Until then, he’ll keep smiling.