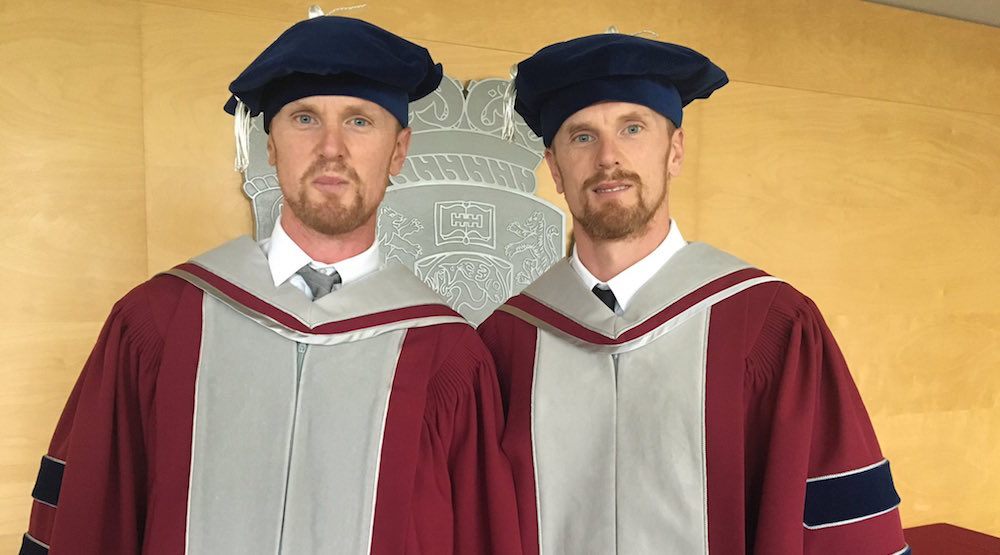 Rookies will have to refer to the Sedins as Dr. Daniel and Dr. Henrik going forward, according to Daniel Sedin.

That would be accurate too, as the Sedins picked up honorary Doctor of Law degrees from Kwantlen Polytechnic University on Thursday.

The twins were honoured for “the citizenship, sportsmanship, civility, respect and care they demonstrate both on and off the ice in their adopted province of British Columbia.”

“Over the years, their support has benefited over 50 charities,” KPU president and vice-chancellor Dr. Alan Davis said.

The Sedins, whose father was a teacher, said they were honoured by the recognition, and that it made their parents very happy.

“[Our father] emphasized the value of education from a young age,” Daniel said, addressing the graduating class.

“We were pretty decent students, but we never thought one day we would get doctorate of law degrees. In fact, we never graduated from college or university so we’re not quite sure how we’re qualified to speak to you today.”

Daniel listed the many charities that he and his brother have had a chance to be involved with, and stressed the importance they’ve had for them personally.

“Wherever you go from here and whatever you do, I hope you will be as lucky as we have been to be associated with organizations that become a part of your life and help you to make a difference in your community.”

Henrik, who first joked that his GPA was higher than Daniel’s, focused his speech on the area of leadership. In that, he told the story of the difficulty the twins had at the beginning of their careers.

“The journey hasn’t always been easy,” Henrik said. “When we first came into the NHL in 2001, expectations were pretty high for us. It was tough to manage and honestly, it often felt overwhelming.”

“Success did not come right away when arrived from Sweden. At times, coming to the rink every day wasn’t much fun. We didn’t feel like we were meeting the expectations of our coaches, teammates, and ourselves. Daniel and I honestly talked about playing until our contract was over, and returning home to familiar and comfortable surroundings. It would have been very easy to give up.”

The Sedins of course, didn’t give up on the franchise or the NHL, and have become the top two scorers in Canucks history. Daniel leads the Canucks all-time in goals, Henrik leads in assists.

“What helped us to turn the corner was the support and encouragement of the veteran members of our team. Those guys reached out to us and pulled us up. They gave us the encouragement and confidence that we needed to begin to succeed.”

Henrik said that turned them into the leaders they are today.

“As new graduates, future business and civic leaders, you will find that helping others and contributing to your community becomes a rewarding and enriching part of your lives,” he said, offering wisdom to the class of 2017. “That has definitely been the case for me, Daniel, and our families.”

“Thank you for this incredible honour and for sharing your day with us.”