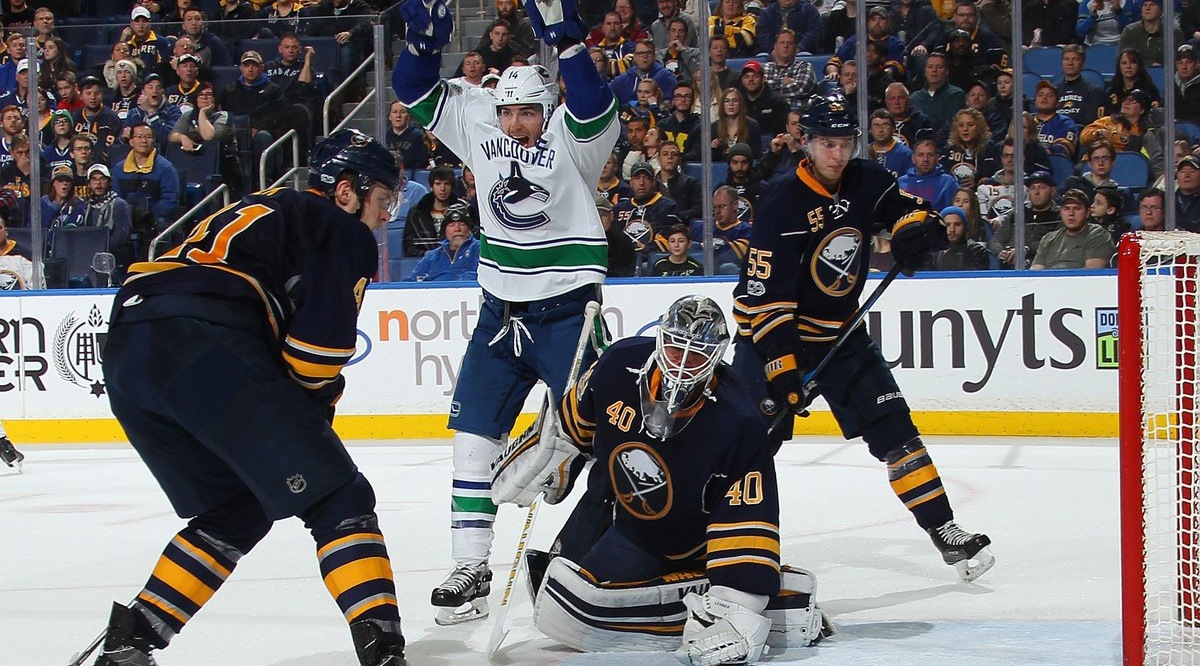 You could say it was all Burrows, but that wouldn’t be fair to Horvat.

With trade deadline day less than three weeks away, Burr, one of Vancouver’s biggest trade chips, was everything against Buffalo.

He got in Lehner’s kitchen in the first period, scored and assisted on goals in the second, and he was the centre of attention all night long.

And Horvat? Much like we’ve done with the Sedins for the last eight years, we’re starting to expect dominance from him.

Horvat scored again, this time on the power play, and no, no one was surprised.

Well, maybe his coach – the one who doesn’t think he should be playing in the last minute of games when the team desperately needs a goal – he might’ve been surprised. No idea why.

He might’ve been surprised by Markstrom too, who he passed over for Saturday’s game against the Bruins.

But hey, if I’m going there, I better mention that Chaput had two goals in the 4-2 victory too – fitting that one of Willie’s favourites returned his love on the verge of Valentine’s Day.

1. All Burr all night

Just to set the stage for Burr’s game…

I mentioned Burr getting into Lehner’s kitchen above. Really, it was a huge overreaction by Lehner. The Canucks got a power play out of this, but check it out yourself and tell me they didn’t deserve more?

Best part of it all was Burrows’ response in the second. First, his goal.

Followed by this exchange between him and Lehner.

Plus, he also had the second assist on Chaput’s goal.

Daily Hive’s Lachlan Macintosh was on the scene in Buffalo, and he spoke with Burrows after the game.

First, Lachlan asked what he and Lehner said to each other.

“Not much. He’s a competitor. He’s playing well for them right now.

“He had a great night last night. You want to get in his head a little bit and make him focus on other things that stopping the puck, and I thought as a whole we did a good job tonight.”

Then Lachlan asked how he felt being so involved again.

“Someone said it’s like old Burr. Maybe back in the day I used to do that a lot. (Now) not as much – I think the game’s changed. There’s not as many after the whistle plays as there was when I first started.

“The game’s changed but I still like once in a while to get in there, and I thought our guys responded well. We scored a big power play goal and we carried some momentum after that.”

If we’re watching Burr’s last few weeks as a Canuck, we should remember this game. It was a vintage performance, and it should remind you how much of an impact he had on this team when he was doing stuff like this every game.

A day after Willie didn’t play Horvat in the final minute of a losing cause against Boston, that was still all anyone wanted to talk about.

It was warranted too – he’s the team’s engine now – how they don’t find a way to get him on the ice when they need a goal is more confusing than Vancouver’s bi-polar weather these days.

Talking with TSN 1040’s John Abbott before the game, Willie explained he wanted his best faceoff guys out there for that last minute draw. It wasn’t only stats, he added – there was a “gut feeling” involved too.

(Did your brain just explode at Horvat not giving Willie a good “gut feeling” when it comes to scoring?)

When Abbs pressed, asking why he didn’t consider taking anyone off the ice for Horvat, Willie responded he couldn’t take Hank off because Sedins (obviously I’m paraphrasing), couldn’t take Eriksson off, because he was brought in for situations like those, and Sutter? Well he has a right hand shot.

In case you missed it, Sutter was the third option that went through his mind for people he could switch out for Horvat… and since you didn’t hear the audio, his Sutter mention was almost dismissive – as in obviously you don’t remove him.

@omarcanuck I shoot right. I must be a better option than Bo

Tough to see it in the gif, but that might be Horvat’s best tip-in goal of the year. It was completely reminscent of many Kesler power play tips of years past.

This is worth keeping an eye on too.

Horvat had treatment and was in obvious pain post-game after late SH shot block. #Canucks have MON off. They’ll need him TUE.

I’m not wishing it for a second, but if Horvat’s injured, would that make Willie realize how important he is to the team’s offense?

During a third period power play, the Sedins stayed for the full two minutes, well past their usual power play linemates. The resulting PP line: 22-33-53-27-23.

No other way to say this but it was possibly the best the power play has looked all season. They moved the puck well, they created turnovers, they kept possession.

It was amazing to see what a loaded up power play line could do, and also amazing to think the coaching staff hasn’t considered putting these guys together all season, especially with the issues the team’s had on the man advantage.

I know this article makes it look as if the Canucks dominated the game and it was a perfect outing, but it was far from.

See, the Canucks went out of their way to help Buffalo score their goals.

And then Sbisa, apparently playing defence on Okposo’s goal… (could’ve fooled me).

That’s Okposo to the left of Markstrom, putting the puck in while Sbisa waves his stick.

I’m saying… Philip Larsen thought that was a soft play.

5. How Willie looks at Sutter

Brandon Sutter has been stapled to the first unit power play since the season began. When Hansen was injured, he was the first one to get a look on the Sedin line. When the team needs an extra attacker, they call on #20.

You have to ask, what does Willie see in this guy?

This would explain a lot, though.

@omarcanuck Willie can only see Megna, all other players are figments of your imagination

6. How Willie looks at Horvat

Then there’s Horvat – the team’s leading scorer: he started the year on the team’s fourth line, he plays on the second unit power play and the team’s “checking line”, and he can’t get on the ice when the team needs a goal at the end of the game.

How does the coach look at him?

@omarcanuck he doesn’t know who he is

This is probably true:

And this is mental gymnastics.

I’m just going to leave this here and hope someone takes notice… (they look sharp as hell, don’t they?)

@TSN1040 @Canucks @adidas Top three. Maybe do a green version for a heritage classic or some outdoor game. pic.twitter.com/fH8fDqzK37

Note: Thanks to Ryan Biech for his gifs, and Lachlan Macintosh for his great work with the quotes in this post.