It’s hard to say whether Canucks fans will be happy they woke up early to watch today’s 10 a.m. game against the Sabres.

Looking at the teams and how they were playing coming in, it should’ve been worth giving up that Saturday sleep-in. The Sabres are young, fast, and exciting, but they were also 5-8-0 before the game. In a year they should be running all over the Eastern teams the way the Stars are to the West right now, but they’re not there yet.

The Canucks dominated this game like Kobayashi dominating a hot dog and this possession chart from hockeystats.ca proves it. 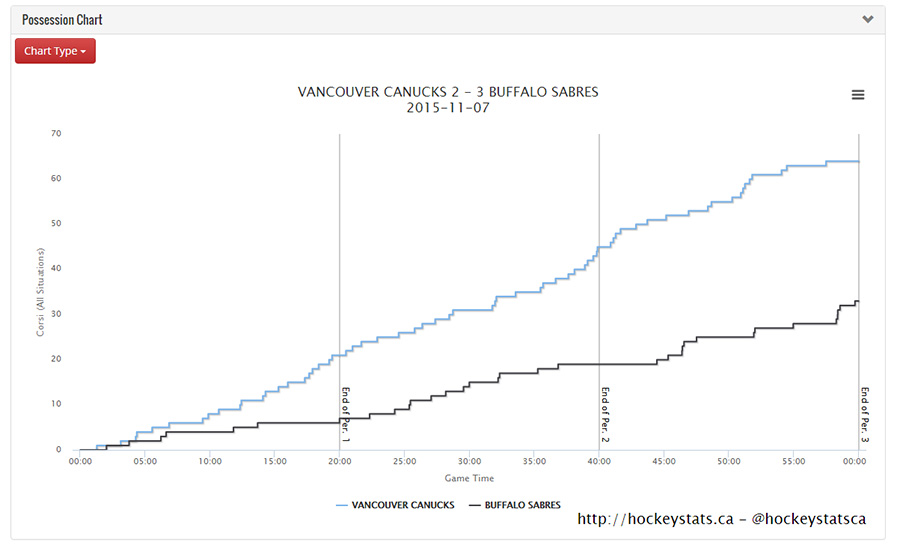 Hockey’s a game of bounces, though, and the Canucks got none.

Buffalo also got a gift from Daniel Sedin with the game tied 2-2 at the end of the third. Trying to make a pass inside the Sabres’ blue line, he coughed the puck up leading to Rasmus Ristolainen’s winning 3-2 goal and this celly.

Not the way Ryan Miller’s return to Buffalo was supposed to go.

People wondered if Miller’s return to Buffalo would be similar to Roberto Luongo’s emotional return to Rogers Arena last year.

The Sabres played a video for him, and…

Here’s a video of Miller saluting the crowd.

They love him almost as much as Jim Benning does.

Ryan Miler on winning goal: “We need some kind of spark here. It’s attention to detail and we’ve got to have better awareness.” #Canucks

Ryan Miller on winning goal: “A D-man can’t be in the slot, get contested by your D-man in the last minute. It’s a pretty critical error.”

Ryan Miller on winning goal: “We tried to backcheck and I don’t want to fault them, but we had two, maybe three guys looking at the puck.”

Saturday’s game was the first part of the longest road trip by any NHL team this season. It’s seven games in eleven days, though there’s only one back-to-back.

Jim Benning said yesterday Jacob Markstrom will play in Utica over the weekend and rejoin the Canucks Monday.

Late in the Canucks game against the Sabres, Miller was knocked hard into his net and took a while to get up. If that doesn’t remind the Canucks they need to rest the guy – he’s 35 and has past knee problems – not sure what will.

Unfortunately, the second part of the back-to-back is Sunday against the Devils.

Markstrom lost in a 5-4 shootout Friday night, so it’d be good for him to play Saturday to sharpen up some more… and don’t think you want him starting three days in a row.

As if Chris Higgins could earn any leash in Vancouver.

He scored the tying goal and it was a pretty one too – he stickhandled through through the Sabres – so Canucks fans will appreciate him again.. for a day or two.

Here’s the goal, and it should remind Canucks fans of why they used to like Higgins so much.

Then Torts and Willie gave him second line duties and asked him to score like a top-six forward.

Yep, pretty sure Sven Baertschi will be mentioned in the SixPack every game he plays.

First some comments on Sven from Benning:

“Sven is a young, skilled player, and sometimes we need to be more patient with those guys because he’s got to make the adjustment to the NHL.”

I know you’re going to start to think I have something against Baertschi, but I don’t.

I’m constantly trying to look at him the way an NHL coach would, the way Desjardins probably does.

What I see, and what I think the coach sees is when he has chances to fight for the puck, he usually loses. That’s it. Willie doesn’t care for all that fancy passing, nice stickhandling, great vision stuff. If he doesn’t win battles he’s a liability to Willie.

During the first period, Baertschi had a shift that showed every reason so many Sven fans and Willie are at odds.

He went to the net, took a pass from Jannik Hansen and had probably the Canucks best chance of the first period.

Just before that, he was skating into the zone towards two Sabres players who had the puck, and attempting to forecheck and dislodge the puck, he was batted aside like Doughty getting hit by Virtanen.

Later, in the second period, Baertschi was on the ice when Buffalo scored their first goal. He was far from the only reason for this goal, but given the chance to clear the puck past the blue line, he failed.

Look, if I were the coach, I’d keep putting him out there, hoping he’d make up for those failed battles with his offence. But I’m not. I’m just a lowly SixPack writer.

5. Imagine having a farm team closeby

Alex Biega was sent to Utica Friday, which is a bit risky considering the team only has six healthy defencemen right now.

Asked about sending him down, Benning replied: “This next two weeks, we’re a phone call away, and we’re an hour flight away from him rejoining the team.”

Made me think about how much easier it is for Eastern teams to manage their players moving between teams. A guy like Biega (or Richard Bachman) would be able to stay in game shape, playing with the minor league team, and be back with the big club mere hours after his game.

No wonder the Canucks have never won the Cup is all I’m saying.

Sportsnet had a feature where some of the player’s talked about their best roommate stories during the first intermission. Alex Burrows’ was worth including:

“Mason (Raymond), living on a farm in Alberta all his life, used to love getting up at 5 or 6 a.m. I liked to sleep in and go to bed late.

So he’d go to bed real early around eight and I’d still be watching TV.

Then he’d wake up real early, he’d pull open the blinds, ‘Rise and shine, cowboy,’ he’d say, and I’d have to get out of bed and go for breakfast.”

Meh, it was funny when he said it on T.V.