After losing five games in a row and barely showing up for the last three, the Canucks needed a win more than anything.

They got it and some bonuses – a power play goal, a three goal cushion, a Radim Vrbata hat-trick, and Brandon Prust’s first goal as a Canuck.

Some fans and editors were happy.

@omarcanuck yup, Rob and I are planning the parade as we speak

@omarcanuck its buffalo. We’ll see how the rangers game goes..

Then there were the Debbie Downers.

@omarcanuck no. They played a team that was about at their level coming off a back to back scenario

George has a point. While it’s nice the Canucks got 31 shots, they did it against a tired, young team, and worse, Buffalo took 34 shots.

In the first five minutes of the game, I began to think Linden had the right idea with this West Coast Express night. Dreaming of the days the Canucks had the most exciting team in the NHL sure beat living in the present – sorry Eckhart Tolle.

But Vancouver got power plays and they took over the game.

With the hat-trick and a great looking man advantage they should have some happy feels which they’ll need with the Rangers coming to town Wednesday.

With one of the greatest Canucks goalscorers in attendance, only fitting Vrbata scored three.

His second was a beauty tipped shot.

And the third brought down the house.

By brought down the house, I mean Canucks fans actually threw their hats in appreciation. 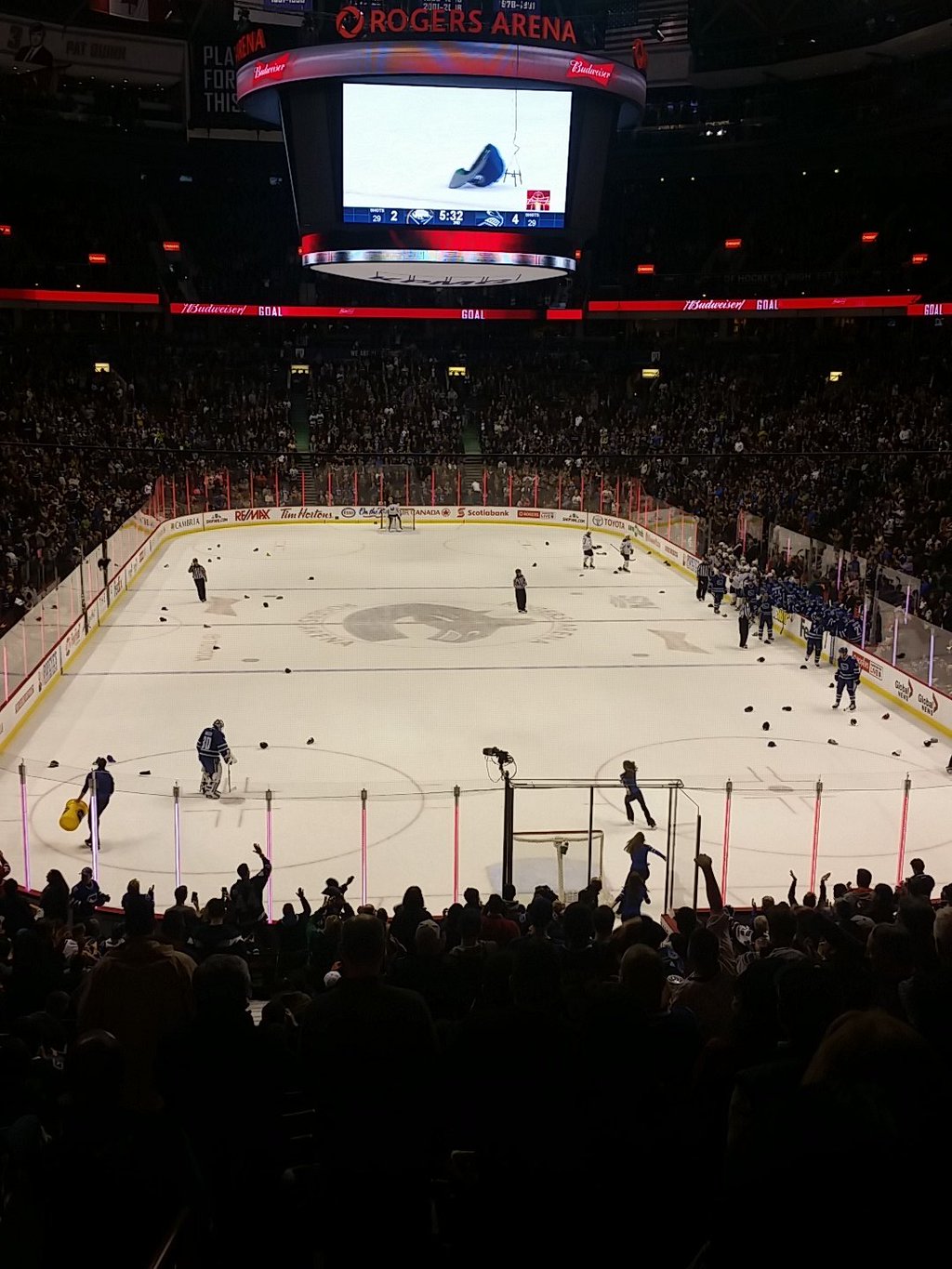 The true biggest positive out of Monday’s game – Vancouver showed it’s a hockey town that still appreciates great plays. Looked to me like the fans were itching to throw those hats to show the two-hat performance for Daniel earlier this season was simply a mistake, not a sign that Vancouverites would rather be sipping a latte on the Sea Wall than watching their favourite sport.

The Canucks showed up Monday, but not in as big a way as the score showed.

Question is will they build on it and continue to improve or will they bring this effort again next game. I say this because it won’t work against New York. An AV-coached team would pick this Canucks effort apart.

More Henrik from earlier – he explained his comments from Saturday when he said he’d love to be playing against the Canucks: “I said after last game I, as an offensive guy, would love to play against us right now because you don’t have to break out from behind your own net, you only have to skate from maybe the blue line, a lot of times from the red line in – you get a 3-on-2.”

Both Sabres goals came off misplays by Vancouver, the type Henrik wants gone.

Bartkowski and Cracknell had back-to-back giveaways early, nearly leading to a Sabres goal. They followed up with another Bartkowski giveaway that actually led to Buffalo’s 1-0 lead.

In the third period they were at it again when Hamhuis lost his handle on the puck behind his own net and Hank, coming back to help out, didn’t help at all, leading to the second Buffalo goal.

Really, Vancouver was lucky Buffalo went the self-sabotage route, taking two penalties in the first, killing their own momentum and allowing the Canucks to grab some.

In the remainder of the game, Buffalo took four penalties and Vancouver only two. That might’ve been the difference right there.

Further, at even strength the Sedins matched up against Rasmus Ristolainen and Josh Georges for the most part, and were completely dominated. Georges and Ristolainen finished with ES Corsis of plus-7 and plus-4 respectively, while Henrik, Hansen and Daniel finished minus-13, minus-12, and minus-4.

If not for those power plays, the game could’ve easily gone the wrong way.

Enough about negatives, let’s talk about positives like the fact the Canucks actually had a second line Monday.

Think I’m talking about hat-trick hero Vrbata and his linemates?

Vrbata actually scored only one of his three goals with his proper linemates, Jared McCann and Chris Higgins.

If you were watching closely, you saw Dorsett, Prust and Cracknell rolled out there after every Sedin shift.

Obviously the Sedins played less at evens because of their power play shifts, but if there hadn’t been any penalties, I wouldn’t have been surprised to see ice times of the “fourth line” equal to those of the “first line”.

If you ask me, Willie’s found himself a new second line.

Which is great against the Sabres, but the Rangers? We’ll see how that goes.

Anyway, Prust put up a goal and an assist and was the third star of the game.

Prust on playing with Bertuzzi in Calgary during his rookie year: “I looked up to him. He was one of my favourite players growing up. When I started playing with him I kind of latched on to him a little bit whether he liked it or not.”

And on how before the game Bertuzzi may have rubbed some luck into his stick: “Bert give me a little love here. He grabbed my stick.”

Sven showed something. Don’t get too excited and think he’s the next Markus Naslund or anything. (someone on Twitter suggested to me Naslund was sitting on the bench at the same age).

But he had a couple of offensive rushes and very nearly scored a goal off a great pass from Horvat.

And he also did this.

Last time the Canucks were this low in the standings (they’re 20th in the league in points after Monday’s win), they emerged from hell with help from the line that would become known as the West Coast Express.

Markus Naslund, Todd Bertuzzi and Brendan Morrison were back in town Monday. Many watching at home let me know the cheers didn’t translate very well over the TV, but being at the Arena was chilling.

Fans did well when Tommy Larscheid introduced Morrison, but when he called up Naslund, the crowd went wild. Bertuzzi’s cheer was probably even louder, though it was hard to tell.

The three held a press conference earlier in the day.

Bert, on the West Coast Express:

“Every game we went into we knew it was a matter of how many, not a matter of what. We knew any given time we needed a goal we’d go out there and get it done, the score may have been 7-5, it drove our coaching staff nuts.

“It was just one of those things, we saw the play develop before it even happened. We just had that instant chemistry.”

Asked about his use of the phrase “It is what it is.”

“That’s just me being a smart alec.”

You never heard it before?

What do you think of it being used now everwhere? You’re a trendsetter.

Later, Bert was on TSN 1040, and the hosts asked what he thinks of the Sedins’ accomplishments.

“I went up to both of them and I wanted to congratulate them. I’m super super impressed with what they’ve accomplished and done. They’re heading their way into the hall of fame for sure.

“For them to have been here in this market for this long and to have endured the ups and the downs, and they took over the team when we all left and took them to the finals, and to continue down that path and still put up points, I take my hat off to them…

“It’s too bad we just didn’t have enough time together. It could’ve been a good one-two punch, then you could look at it and think we coulda had a serious run here.”

Imagine what could’ve been. Not too hard. It might hurt.

Later, Henrik spoke to TSN 1040 about playing alongside the WCE in his early years.

“(Bertuzzi) was always really good to us. He was tough on a lot of other guys, especially Markus and Brendan – mostly Brendan by the way…

Only question that remains is, did the Canucks win the night or did the two teams’ Twitter accounts?

Note: thanks to Ryan Biech who sends out gifs faster than most people write tweets