Let me tell you a tale of a young man on a quest.

A quest so important, that the 3-0 loss suffered at the hands of the Arizona Coyotes is nothing more than a small sidebar to our epic tale.

Alex Bilbo Baggins Burrows, the protagonist in our story, never asked to be a hero. But sometimes life doesn’t ask what our plans are. Sometimes you get thrust into situations where failure seems a certainty, and all you can do is pray you somehow stumble your way to victory, through sheer luck and perhaps the friendship of a rotund pal roughly the same size as you, with furry feet.

Alex Bilbo Baggins Burrows has slayed dragons before of course. He’s bitten the fingers off of a troll. Hell, he even went head to head with the nefarious Rat King Ron MacLean, and lived to tell the tale.

All of those adventures, however, paled in comparison with what he faced tonight.

You see, Alex Burrows had but one mission tonight.

Alex Burrows had to get the Canucks’ first shot on net.

1. Lord of the Rinks – Fellowship of the shot

Our tale starts in Arizona, land of the scorching desert, littered with empty arenas and seats.

Alex Burrows, who thought this past summer he might walk off into the sunset into a peaceful retirement, somehow found himself on yet another adventure with a group of extraordinary people.

Over there was Henrik and Daniel, the Twins who invented Mithril, an office desk that can be purchased at your local Ikea.

In a corner was Try-Ent-Kin, a massive walking tree who had quickly become an ally of Bilbo Burrows.

Chris Boromir Tanev, despite getting shot multiple times, was still managing to plod along.

Troy Stecholas, a fine young elf with a soft, but accurate, shot, was quick and nimble on his feet, and learning every day.

Coach Desjardin-olf the Grey, claimed he was a powerful Wizard, and that every time he twitched behind the bench he was simply casting a spell. Nobody paid much attention to him.

It was with these companions, and many others, that Burrows set out to attempt the impossible. To get a shot in the first period of the game.

Things looked grim early on. Despite getting several chances, many of his companions shot wide. At one point Samwise Sutter broke down in tears, and had to be consoled by Gaunce-li, a hardy dwarf with a nose for…well nothing, really. He just sort of exists.

Now, just when things seemed at their bleakest, the Fellowship of the Shot came through. To this day nobody remembers who got it, but they all swear it happened.

The Canucks got a shot on goal.

They had done it. They had achieved their goal. They had –

@TheStanchion @omarcanuck they just took away the Canucks' only shot on goal.

NO! Doan-um, a creature who had become obsessed with his precious Coyotes, was not to be defeated so easily. He somehow found a way to trick the league into taking away the Canucks one shot. Away from those tricksy little Sedinseses.

The Fellowship of the Shot ended the first period, broken, glum, and defeated. No shots through one period.

Even worse, they lost a companion. Jack Skille-den, the Seventh King of Yaletown, was slain when he was crushed by the the Witch-King Mike Smith.

But the Fellowship of the Shots, they banded together. They knew the fate of the world rested on their shoulders. They set out again, and headed into the second period to find their first shot.

2. Lord of the Rinks – The second period

Just when things looked their bleakest, the Fellowship received a boost. A boost from Cute Child Hobbit Character #3 Jayson Megna, a character many thought was simply an extra, but had somehow become some bizarre central figure to the story thanks to Crazy Wizard Desjardin-olf.

And with that, Burrows knew what he needed to do. With his Fellowship missing men, facing an onslaught of enemies at the Gila River Helms Deep Arena, they somehow managed to hold the line. They bent, but they didn’t break. And when Burrows saw his chance, he took it…

Yes, at 11:47 of the second period, Alex Bilbo Baggins Burrows had done it. He had gotten a shot on net.

This new banner going up at Rogers Arena is a bit much pic.twitter.com/lUdd0qumgD

Banners were erected. Fireworks were lit off. Oddly out of place pillow fights took place in a well lit room. It was bonkers.

Since NHL started tracking play-by-play in 2003 no team has gone as long as the #Canucks did tonight for their 1st shot on goal (28:12)

This was how impossible the task was. No one else had ever done this before. It was truly a miracle.

However, little did the Fellowship know that they still had one more journey ahead of them….how to lose the game.

3. Lord of the Rinks – Return of the loss

Yes, with the Fellowship having completed their first task, losing the game was next on the list.

In order to do that, they employed two techniques.

One, Alex Edler kicking the puck to a Coyote, then jamming his stick under Miller’s pad, then jumping face first in a vain attempt to block a puck.

Ugly, sure. Effective? Yes. Sean Bean would be proud of the way Edler died on this play.

To do this, they resorted to an old fashioned technique called “hit the puck right to your opponents stick while your goalie is out of position.”

Legolas himself couldn’t have green screened that one better.

The Canucks had a brief rally in the second period, where they actually looked threatening, but by the time the third period rolled around the Coyotes had it on lockdown, and we basically got to watch paint dry. Except imagine the paint drying being a video that’s been slowed down to half speed. And it keeps pausing every other minute.

If you missed tonight’s game, go to your PVR and delete it. Beat it with a hammer. Burn it. Do whatever you have to do to not watch this game.

You will not be a hero if you watch this game. Save yourself.

4. Troy from Richmond does dope things

My choices for highlights were Daniel Sedin kicking a pass over to Henrik, who then passed it to Sbisa who missed a tap in, or, Troy Stecher skating all fast and doing a sweet back check.

This was Stecher’s sweet back check.

I don’t even know anymore.

This game was trash.

The fourth line was actually pretty good tonight, in that they spent time in the other end of the ice.

Did they get a lot of shots ON net? Well, no. They only got two shots.

But my god did they Corsi the hell out of the Coyotes.

Except one of those in the against category was a goal against.

But my god, the Corsi-ing!

It was so good Megna and Chaput both got turns to score a goal/get a shot on net/find a way to let us all down with under two minutes left in the game.

Megna and Chaput are never leaving this team.

Willie will hit Hansen in the knee with a hammer and Tonya Harding it to get it done.

Admit it, you can see that happening.

6. Ryan Miller made a funny save 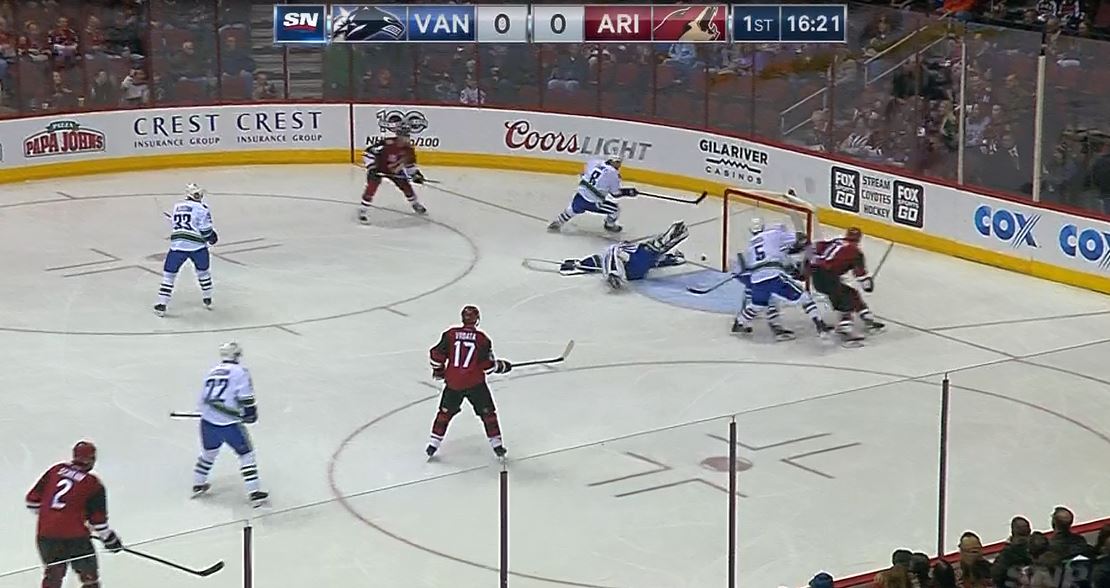 I know I sometimes joke about having no highlights to write about, but my only options are: 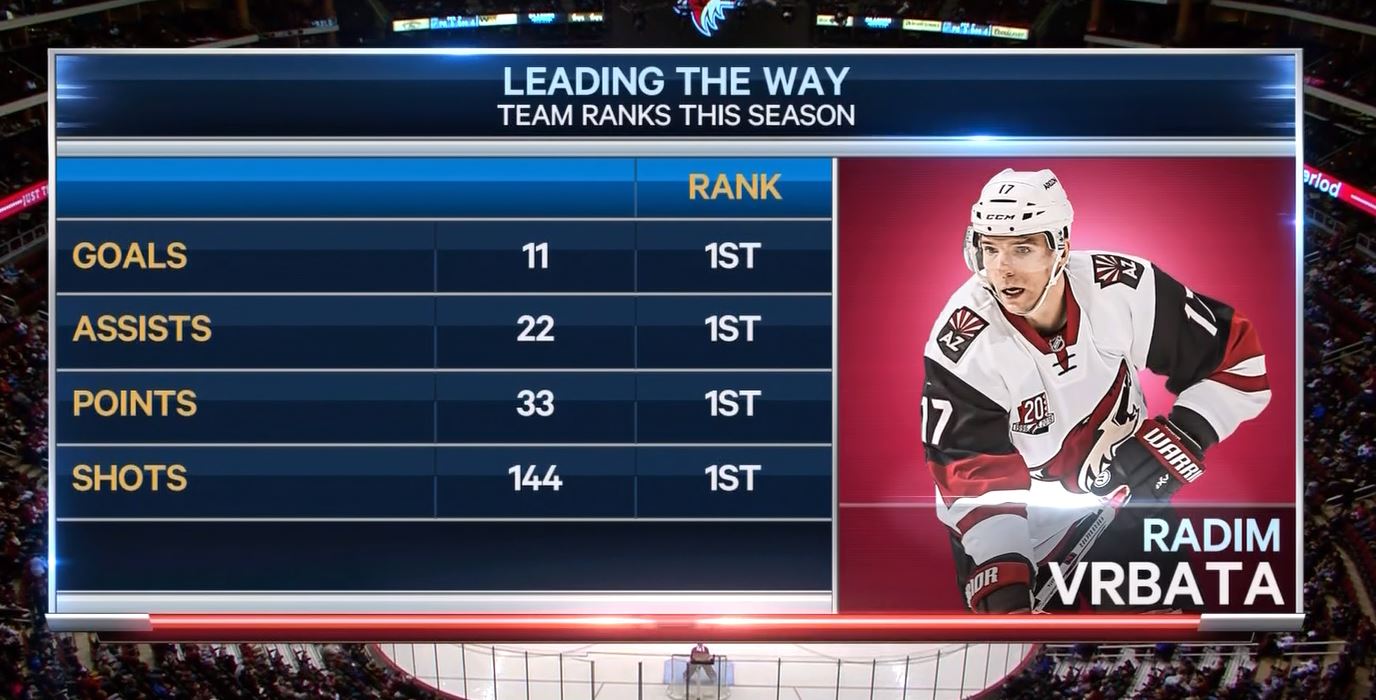 Watch him get traded for draft picks while Benning readies himself for a playoff run?

Onions. I should have gone with onions.