Grenier is on his way to join the Canucks and will play in tonight’s game against the Winnipeg Jets. Shinkaruk is on his way back to Utica after just one game.

Shinkaruk made his NHL debut in Monday’s 4-3 overtime loss to the Montreal Canadiens. He had a relatively uneventful evening, playing just 9:35 on the fourth line. He didn’t look out of place though, and I’m sure we haven’t seen the last of the former first round pick in a Canucks jersey. 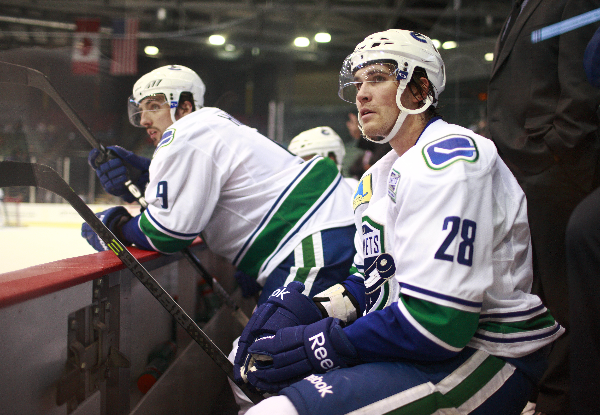 Grenier will become the sixth player to play his first NHL game with the Canucks this year. At 6’5” and 200 lbs, he’s a big body that should match up well against a physical Jets team tonight.

The 24-year-old Grenier was a third round draft pick of the Canucks in 2011. He has 7 points in 14 games this season. Last year he had 43 points in 67 games with Utica in the regular season. His shining moment came in the playoffs, where he was second on the Comets with 15 points in 23 games.