Canucks fans and those who cover the team are passionate. They also have short memories.

Flashback to the end of the 2013-14 season. The Canucks finished 5th in the Pacific Division and 25th overall in the league in a season that saw their coach, John Tortorella, suspended and their captain, Henrik Sedin, lead the team in scoring with a paltry 50 points. The season was an absolute disaster and it was the first time the Canucks had missed the playoffs since the 2007-08 season.

On April 7th, 2014, Canucks fans decided to voice their displeasure towards Mike Gillis as a game wound down against the Anaheim Ducks.

We all know the story well by now. Gillis was fired and the Trevor Linden/Jim Benning era began shortly thereafter.

It appears that a season later those who were chanting “Fire Gillis” have now turned their venom towards Benning and Linden.

I find it funny how quickly fan and media sentiment shifts. Don’t get me wrong, I’m as puzzled as the next guy by some of the recent Canucks moves, but, in the context of what has gone on in the last few years with the franchise, any reason to be in panic-mode is premature.

Jim Benning had a plan last year that he followed to the letter. He felt the core of the Canucks was solid and that this team could get back into the playoffs if surrounded by better depth. Players were added on the periphery and Ryan Miller was brought in to bring some experience at the goaltending position in addition to an already solid, but inexperienced Eddie Lack. The team played a more exciting brand of hockey and overachieved. The Canucks shockingly came 2nd in the division with 101 points and almost every player that slumped the year before reversed their fortunes.

On the playoff loss to the Flames…

Benning felt the core of the Canucks was too good not to give them a chance to go on another run in the playoffs. While the Canucks once again disappointed in a first round loss to the Calgary Flames, even the most cynical of fans had to admit that for a brief moment they could see some scenario where the aging core may have had a chance. After all, the Canucks were matched up against a “dream” first round opponent. We all know what happened and I don’t think that was lost on Benning and Linden.

On the Utica Comets… 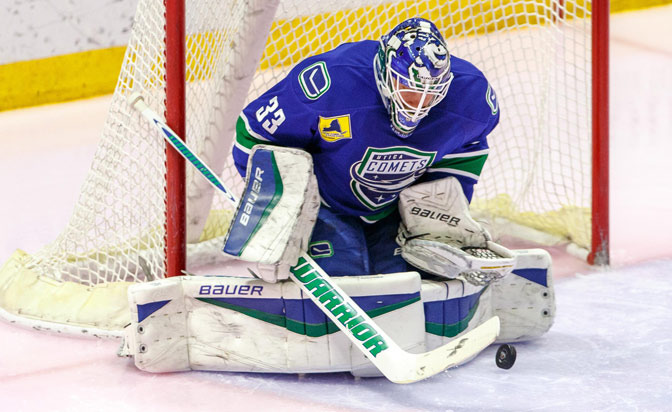 Benning’s mantra was to have the Canucks AHL affiliate Utica Comets be competitive in order to have the Canucks’ best young prospects develop in a winning environment. Few can argue that Benning did not deliver to this regard with the Comets losing in the Calder Cup Final to the Manchester Monarchs. When the Comets run finally came to an end, Benning publicly stated that 3-5 current Comets appeared ready to move on to the big club next year.

On the trading of Eddie Lack, Kevin Bieksa, and Zack Kassian…

Much has been talked about the trades involving Lack, Bieksa, and Kassian. These trades in isolation represent the actual value of these players on the market. The trades when viewed together appear to be a brutal return for what many feel are good assets. In reality, the Lack deal is the only one that Benning should have thought twice about consummating.

Lack obviously is not perceived by NHL GMs as a bonafide #1 goalie and the return, a 3rd round pick in the 2015 draft and a 7th in 2016, revealed this. Clearly Lack was more valuable to the Canucks than the rest of the league. Benning should have realized this and simply moved on to try to get a draft pick of some sort for Jacob Markstrom.

Benning got a 2016 2nd round pick for Kevin Bieksa. This was a move borne out of necessity. Bieksa was the obvious choice to move in order to create cap space given the Canucks have many right-handed defence prospects. Benning did well to get a decent pick for next year considering Bieksa held the hammer with a no-trade clause and a demand that a contract extension be agreed upon with whatever team he was dealt to.

Kassian was a move characterized by addition by subtraction. There is little doubt that trading Kassian, along with a 5th round pick in 2016, for Brandon Prust, signalled the Canucks were tired of Kassian’s act. The optics of this deal are not good in that many cling to the misguided belief (one that I’ll admit I hold) that Kassian has too many tools to not become a force in the NHL. The reality is that the Canucks received a valuable player in Prust that can help out in the short-term and be traded for a future asset at this year’s trade deadline.

On the firing of Laurence Gilman, Lorne Henning, and Eric Crawford…

No one should be surprised that Linden decided a year after being in the fold to shed himself of Mike Gillis’ hired guns.

Laurence Gilman, in particular, is widely regarded as one of the smartest negotiators in the league and has shown an expertise in salary cap management. To that end though, do not forget that a lot of the reason Benning has had issues getting value for notable players such as Jason Garrison, Kevin Bieksa, and Ryan Kesler is because of the contracts negotiated by Gilman.

In the Gillis era, the strategy around keeping the salary cap under control was to have good players take less money in exchange for no-trade or limited no-trade clauses. This is great when your team is winning Presidents’ Trophies and going on deep playoffs runs. This is a nightmare when you realize the core of your team is not good enough to compete at that level anymore.

This is the reason the trading of Kesler and, to a lesser extent, Bieksa and Garrison got tricky and the return was so mediocre. A year ago much was made of the volume of no-trade and limited no-clauses throughout the Canucks lineup. With the recent firing of Gilman, in particular, this somehow has been forgotten.

On the season ahead and beyond…

"The teams in our division all got better, but we still have a skilled team. We want to be competitive; this is still a playoff team" – JB

Benning has opened up a few spots for some of the younger prospects. Expect to see Frank Corrado, Adam Clendenning, Sven Baertschi, Ronalds Kenins, and Jacob Markstrom all playing significant minutes next year with a chance of players like Jake Virtanen and Alex Grenier also having a chance at making the big club.

The Canucks have a lot of money coming off the books, roughly $14.5M, with expiring contracts after next year so they are in good shape salary cap-wise. Benning has a few assets, in Dan Hamhuis and Radim Vrbata, who are on expiring deals that could fetch high draft picks or prospects at the trade deadline. The Canucks are in the midst of a strip down and rebuild even if Benning and Linden don’t want to admit it publicly. They should, and then get on with it.

It is odd how a few trades, two of which pretty much everyone who follows the Canucks knew were coming and a third that many hoped wouldn’t come, has changed the perception of the Benning and Linden regime. Let’s be honest here. Benning and Linden followed through last year to a tee with what they communicated as their plan. Very little of what they have accomplished so far cannot be seen as an improvement from where the Canucks were when the “Fire Gillis” chants echoed around Rogers Arena. This is obvious when you can remove yourself from focusing on the minutia (insert Lack vs. Miller debate here).

The problem this year isn’t really what Benning and Linden are doing, it is what they are saying. The fan-base and media in this town are savvy and don’t like to be taken for a fool. The Canucks are in the beginning of a much needed rebuild and will not make the playoffs next year. I know it, you know it, Benning knows it, and we should all be happy it is happening.