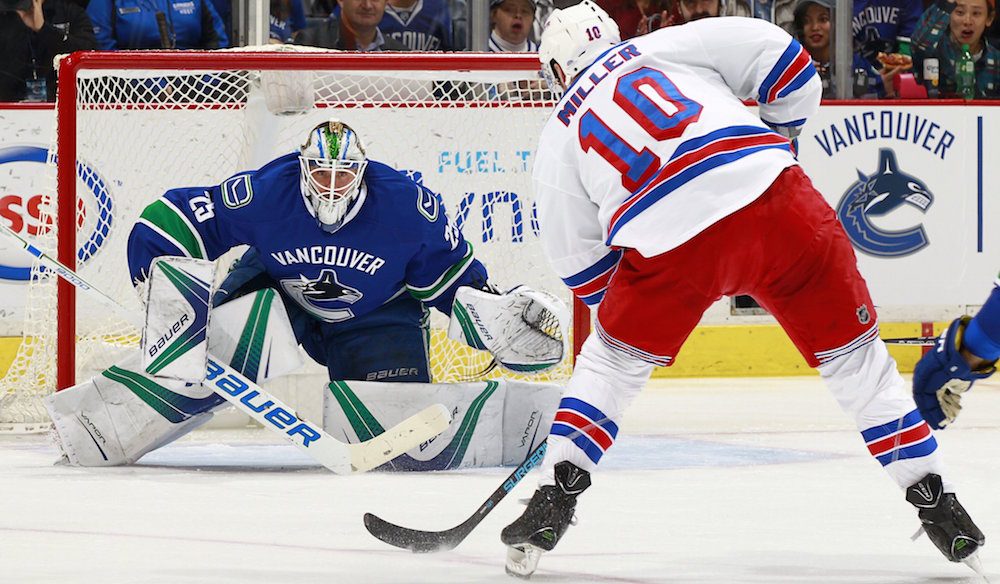 Tuesday’s game promised to be good times for fans at Rogers Arena.

Vancouver proved they could score coming off a 5-4 win over Dallas, while New York is the highest scoring team in the NHL this season.

And last week the Canucks scored six against this team.

Sadly as the super moon did in Vancouver 24 hours earlier, the event failed to live up to the hype.

But don’t even think of leaving now. Despite Vancouver’s 7-2 loss, there is tons of Canucks stuff to talk about.

There’s the possibility of a trade for Evander Kane stuff.

There’s the new developments in the Kadri-Sedin hit stuff.

Before we get into all that fun stuff, let’s look at what happened in Tuesday’s game (which was not fun stuff).

First, check out the possession chart. 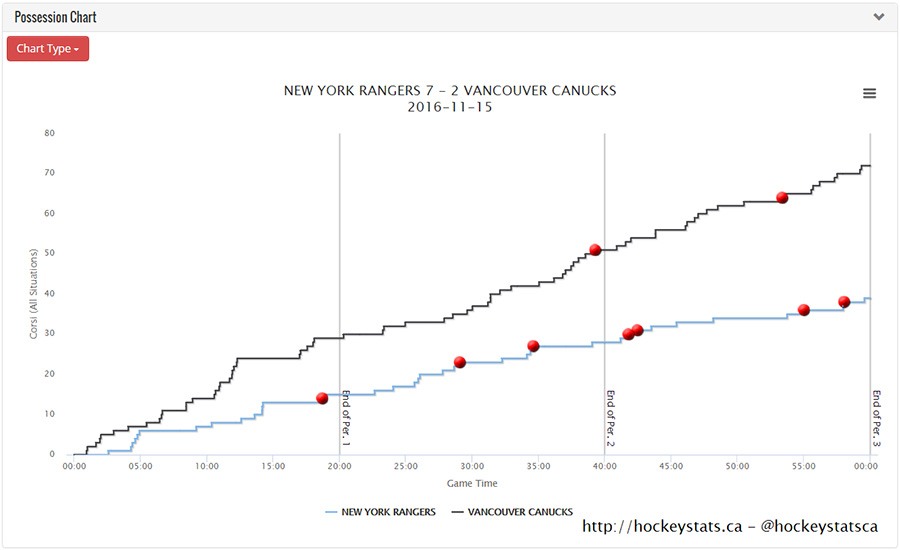 You did a double take when you looked at the chart, right? Thought the black line was New York? Thought the team that won 7-2 dominated every part of the game?

Many times this season we’ve talked about the Canucks outshooting their opponents or deserving a better fate.

This time, they really did. I’m serious.

Look, the Canucks outshot teams before, but rarely could you say they had high quality scoring chances. Really, they had nothing around the net.

While I said Vancouver deserved a win, I can’t say New York didn’t. They played the same transition offence that’s made them the highest scoring team in the NHL all season.

One second Vancouver was dominating the offensive zone, the next, the puck was in the back of their net.

If it were a one off, I’d say the Rangers were lucky in this one. But that transition is no fluke, and it’s no joke. It can put up seven goals too, which is a dream from a past era for the Canucks.

(let’s not mention which coach’s era that was, OK?)

Not sure who should get credit for coming up with Badbranson – Wyatt, who coined it in a SixPack earlier this season – or branson himself for inspiring it.

Either way, branson clearly doesn’t want the name to die.

You can judge his play yourself on two of the Rangers goals – and these happened when Vancouver was still in the game, so you can’t be all It was 7-2 no wonder he checked out!!

You can’t see it completely in the gif, but those are Gudbranson’s feet at the top of the screen. He should’ve challenged the shooter, but he got caught watching.

This one was worse, because clearing the front of the net is what Gudbranson is supposed to be good at. That physical presence is the biggest reason Vancouver traded McCann for him.

That and the “intangibles” I guess…

3. Stech Curry is taking over

You read that right – Stecher logged over 24 minutes. He was a plus-7 in shot attempt differential, while Edler was plus-8. Gudbranson was plus-2 and Hutton 0.

Soooo they probably could’ve used Stecher during that losing streak.

About a year and a half ago, the Canucks were rumoured to be in on the Evander Kane trade talks with Winnipeg. Then he got traded to Buffalo in a massive deal that included Tyler Myers, Drew Stafford, and Joel Armia going the other way.

After the trade was done, Benning told the media Winnipeg had wanted Horvat, Virtanen and McCann, and Vancouver wasn’t willing to include them in the deal.

So it was done, right?

Nope. According to Bob McKenzie, Vancouver went after Kane again this summer.

“Here’s what we know: in the summer, Jim Benning went to the Sabres and said we need scoring, and I’m interested in a homecoming of sorts for Evander Kane, Vancouver native. At that time I don’t believe the Sabres were interested in moving him.”

On Tuesday, the Kane rumours resurfaced when McKenzie said this:

“My understanding now, and it’s no secret, the element [Vancouver is] missing now is a goalscoring winger, somebody that can bag 20 for sure …

My understanding is that as part of their continuing search, Vancouver has gone back to Buffalo to see where they’re at … I wouldn’t be surprised (if Buffalo is more willing than they were before to trade Kane) …

All I can tell you is this: Buffalo, if they were willing to trade Kane, they’d want a defenceman.”

If Edler and Tanev are the first who come to mind for you, you’re not alone. But McKenzie says it’s not happening.

“Nobody’s going to want Edler because of age … they’re not trading Tanev because he’s too important – he’s a top pairing guy for them, so then the question becomes your second pairing – what about Ben Hutton? He’s an intriguing guy, he’s a very underrated, he’s a big body, he’s got some offensive ability …

That would be the guy I’d would think most teams would say, ok if we’re going to give up a potential 20-goal scorer then we want a potential top-4 top-5 defenceman in Hutton. I don’t know if Vancouver has any interest whatsoever in going down that road.

They’d probably say you can have Luca Sbisa, but nobody’s going to want a third pair guy that in their mind makes too much money for too long.”

If Vancouver trades Hutton, Benning might as well stand on top of the Olympic torch and yell “Screw the future of this team, we’re playing for now!”

While you might agree Tanev should be considered untouchable, consider this:

Vancouver is spending right to the NHL’s salary cap this season, and this summer they’ll have a bunch of players turning into RFAs.

Oh, and Bo Horvat’s another.

With that in mind, the Canucks would be wise to trade Tanev while he’s highly valued, and before they’re forced to because of the salary cap.

I went to my followers with the Hutton for Kane idea suggested by McKenzie.

Some (not many) said yes:

@omarcanuck we’d get at least 7 good years out of him. I’d say it’s a good one for one trade. Tryamkin is ready to replace.

Some dismissed it quickly:

And some were more upset by the idea:

@omarcanuck fuck that might be the final straw for me. I was born in Wpg. I’ll cheer for the Sedins but I cant support this organization

Stech Curry-mania notwithstanding, the most memorable moment of the Canucks season so far has been Nazem Kadri’s hit on Daniel Sedin and the lack of supplemental discipline afterwards.

With the GMs discussing blindside hits as well as other things at their meetings Tuesday, HNIC revisited the hit on Saturday.

Nick Kypreos presented the history behind the “blindside hit” rule, first showing two hits from 2009 that caused it.

Neither Richards nor Cooke were suspended for these hits, he noted after showing them.

“That was a legal hit back then. You could hit a guy in the head and still not get suspended, so all this terminology started after. They introduced the word blindside, and then later on, they got rid of the blindside and they focused on principal point of contact (he pointed at his chin here).

Good explanation of what the league is thinking, even if it doesn’t make much sense.

Then Kypreos continued with his own opinions:

“I will say this: if you introduce now that you can’t hit anyone now from the blindside, you’re going to take a big part of hitting out of the game. I think there’s a lot of people that feel that there’s too much hitting not in the game like it was 15-20 years ago and we’ve lost an element of that part of the game.”

“You tell me how now in today’s game how you can backcheck and have a new blindside rule in? Nobody would be able to touch anybody on a backcheck.”

What doesn’t make sense to me is Kypreos is basically advocating for players to make hits like Kadri’s on Sedin.

Kadri’s principle point of contact, if not the head, was the top of the shoulder. It definitely wasn’t his arm or body, or any part of him that could absorb the hit.

If it wasn’t an intent to injure, I’m not sure what is.

Obviously we’ve belaboured the hit enough now, but if I were talking to Kypreos, or was at the GMs meetings, I’d simply ask this: if this happened once a week – if a back-checking player took out a player in the motion of shooting a puck like Kadri did to Sedin – would that be OK?

If not, there should be a rule in place to stop it.

So what came out of the GMs’ meetings? According to Pierre LeBrun:

Said one of the eight GMs in the room Monday when they voted on the Kadri-Sedin hit: “The room was split.”

It will be talked about again at the March meetings but finding consensus is proving difficult.

Half the room wants that kind of hit to stay in the game? Crazy stuff.

Despite being called up from Utica after only two games, Jake Virtanen didn’t play Tuesday.

Earlier in the day, Willie offered up this reason to the Province on why Virtanen didn’t stay in Utica:

“I don’t think he had any of his stuff so I think he needed to come back to get his stuff for us to make a decision on where we’re going to go with him.”

Sekeres: “Mr. Tomlinson suggested this morning that it wasn’t all that unusual for Virtanen to be skating with the early group before the optional or the practice. I thought this was something new, can you shed light on that?”

Abbott: “My opinion is if you’re out of the lineup you better show up and give no excuses to get back in and part of that is being visible, so it is taking optional skates, it is putting more time in. It may not be the most fun thing in the world, it might be taxing …

@HockeyAbbs I gotta ask, what sessions/ optional skates do you think jake misses? Missed one this year..

Guess that’s not it either.

Wyatt’s theory is actually better than anything else out there.

I honestly believe that the Canucks felt, left to his own devices, Jake was going to booby trap a house in Utica. pic.twitter.com/oRahGrKPc7

OK enough speculating on Virtanen. I’ll leave you with this shot of Vancouver’s coach who, having lost 11 of his last 13 games is feeling the heat, one might say.

Is there more swaying and twitching than normal? I’m not sure. He kind of always looks like that. Either way, he can’t be feeling too comfortable right now.

Note: Thanks to Ryan Biech for helping with the gifs of the goals in this post