Yet somehow they’ve managed a 2-0-1 record over those three games.

As we decompress from this one and head into Thursday’s game against Boston, you’re going to hear all sorts of theories about how resilient the Canucks are, how they just find ways to get points, and how they have a “never say die” attitude, or some garbage like that.

The Rangers hit about seven posts Tuesday including one off the opening faceoff when Willie sent out his fourth line to start the game, so don’t argue with luck. I’m actually short-changing it.

When I saw this shot chart I had to make sure I wasn’t still looking at the stats from Sunday’s game (from hockeystats.ca) 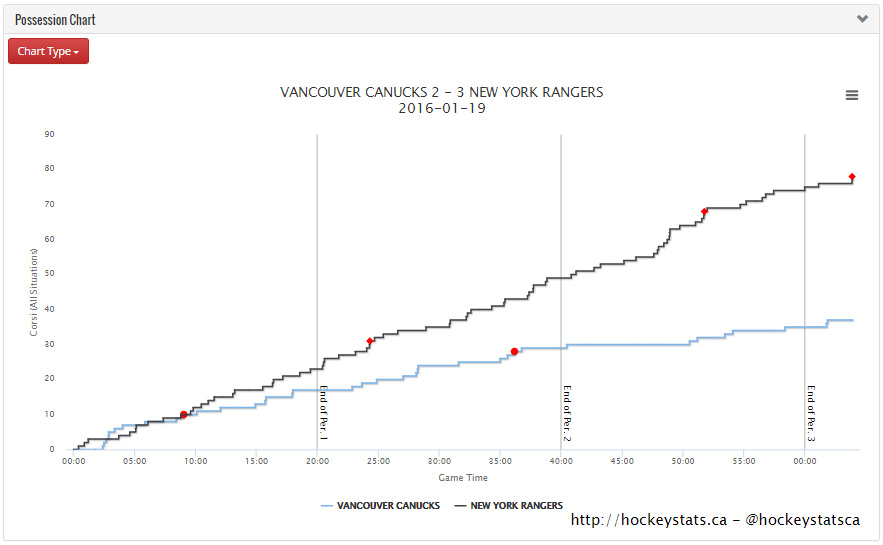 And just in case the team thinks the shots were kept “outside”, here are the shot locations. 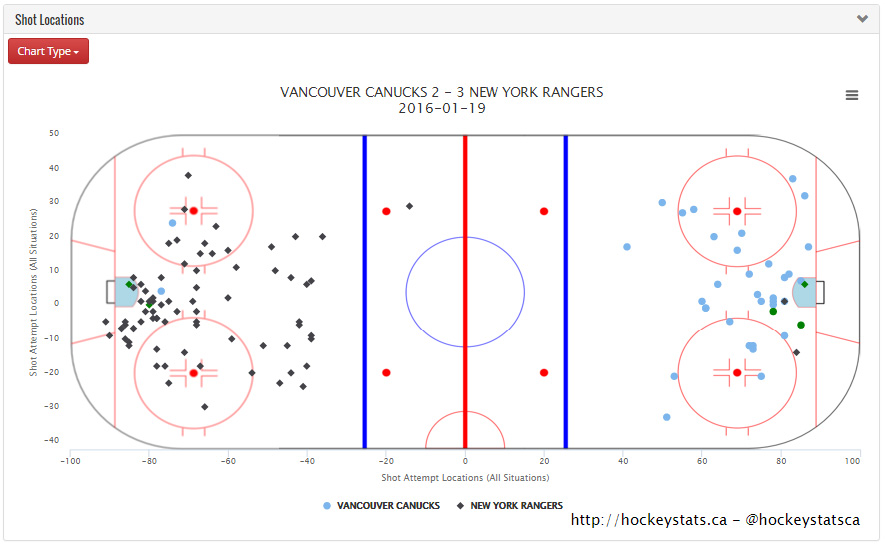 Sadly, there are so many black spots so close together you can’t tell how bad it was.

All this to say the Canucks didn’t play very well but they still managed a 3-2 overtime loss. They almost won it too, being up 2-1 with nine minutes left.

Then Willie’s favourite players got out there and messed it all up.

“Once we get our injured players back and we get our team up and going, we’ll see where we’re at, and I think we’ll be able to compete in most games.”

Let’s be fair: the Canucks played most of Sunday’s game and all of Tuesday’s without Henrik Sedin, and they’ve been without Dan Hamhuis and Brandon Sutter for at least as it took Matt Damon to get back to Earth (that’s what it feels like, anyway).

Those are significant injuries, especially at centre. Without Henrik or Sutter around Tuesday, Horvat took 20 of the 52 faceoffs.

That’s a lot, considering he couldn’t get promoted from the fourth line last year. Especially the carrying the Canucks part.

So yes, Benning makes a good point. These are important injuries.

I thought of filling every point in the SixPack with Miller saves. It would’ve gone viral and been viewed by tens of thousands.

But I didn’t want to freak Vancouverites out with too many images of a masked man committing robbery.

Had to include a couple, though.

Guess what – Daniel Sedin’s not the only Canuck matching records these days.

You’ll be happy to know he did it: Miller tied his record, seeing 97 shots against the two New York teams.

During Monday’s practice, Prust rotated with Jake Virtanen in line rushes, a clear indicator one of them would be scratched for the game.

With Virtanen scratched Sunday and the team following a pre-determined rest schedule, we knew the intent was for him to play.

We then heard reports Prust was upset with the idea of sitting, storming out of the dressing room after practice.

Linden spoke about the potential of Prust being scratched earlier Tuesday on TSN 1040:

“There was some talk of Prust coming out. It being his former team, we thought it would be the right thing to have him in. I think as a coach you want to do the right thing for your room sometimes, and that was the situation today…

“It’s a delicate dance with the coach and his group and his room and the ideas we may have so we try to manage those things and it’s not easy every night.”

And on Virtanen being scratched two games in a row:

“I don’t think it was part of the plan. I think we deviated for other reasons. It’s not ideal, obviously. He was a young guy that was playing well, but we’re changing things up and he’ll be back in against Boston.”

“I asked (Prust) if there was a message to be sent in finding himself in a rotating line and maybe out of the lineup, and he kind of took a moment and kind of fired up, said, ‘There’s usually messages to be sent, you just have to pick up on them.'”

Fine, Prust got to play his former team. There’s something to be said for keeping the room happy, especially the veterans – if Willie loses them, he’s cooked (he’s already looking quite well done, to be honest).

But sending out his fourth line as the starting lineup… that was a bit much.

Their line leading forwards in playing time in the first period… I thought I’d forgotten my reading glasses.

(And I don’t wear reading glasses)

But getting power play time in the third period??

With the Canucks holding a 2-1 lead in the third, no question which line Willie would play most.

To be fair, it’s the same line he plays most when the Canucks are down a goal too.

And pretty much every other situation.

You don’t see it in the gif, but Dorsett had the puck along the boards and instead of clearing it, passed it to Zuccarello. You saw what happened after.

New York tied it up, but an amazing thing happened: Dorsett and co didn’t play in the remaining seven minutes of the game, except for one lone shift from Adam Cracknell.

That, my friends is the story of how Brandon Prust went from nearly scratched to starting lineup to doghouse.

Right now, it’s only fair to spread the blame.

New York’s first goal came during a delayed penalty to Matt Bartkowski. Unfortunately the Canucks didn’t touch up and he wasn’t able to get off the ice.

Every time I see a good Rangers chance I see #44 trying to recover. Jus sayin…

Trying to recover, deflecting the pass from Kreider to Stepan for the goal – whatever you call it, Bartkowski didn’t do very well.

And I’m being nice because his play is making it too easy to pile on him right now.

One good thing happened. Not joking.

Alex Burrows, who hadn’t scored a goal in 24 games, finally did it.

Etem deserved a lot of credit for his work to get the puck on net, but what a finish.

@omarcanuck people who are dead inside

Bo and Sven kept the magic going too.

It’s not new news, but Elliotte Friedman repeated Tuesday he thought Vancouver might make a push for Stamkos this summer.

Pretty crazy thought, but one thing to consider: when guys like Freidman, McKenzie, Dreger or LeBrun talk, there’s often fire where there’s smoke.

I was shaking my head at this being out there again, but Arpan made an interesting case.

Its not going to happen but if I wanna make an argument that the Canucks could get stamkos it would start like this.

1) stamkos agent is don Meehan whose the former agent of Trevor linden. Meehan and linden are still super close from all accounts

That relationship by itself should get the Canucks foot in the door. But no way in hell is it enough to get stamkos

Only other thing can think of is what ownership could do to entice stamkos. If u buy angle they wanna sell team having stamkos does wonders

Long shot? Maybe. But it’s better than the idea of signing Lucic, isn’t it?

Note: I always thank Ryan Biech for his help with the gifs here, but I’m afraid his head might be growing too much…