The Vancouver Canucks cannot beat elite teams due to their inept puck possession. There is a formula to the madness and possibly a solution.

The variable which defines the success (and troubles) of the Canucks is called Fenwick For % (FF%). It explains more than actual time carrying the puck on sticks as that can be skewed by defending teams holding it behind their net and other situations.

The below graph shows teams’ season and playoff finishes for the last 5 years and their FF%. As you can see, there is a very strong correlation of playoff teams achieving high FF% and going far versus non-playoff teams with a very low FF%. 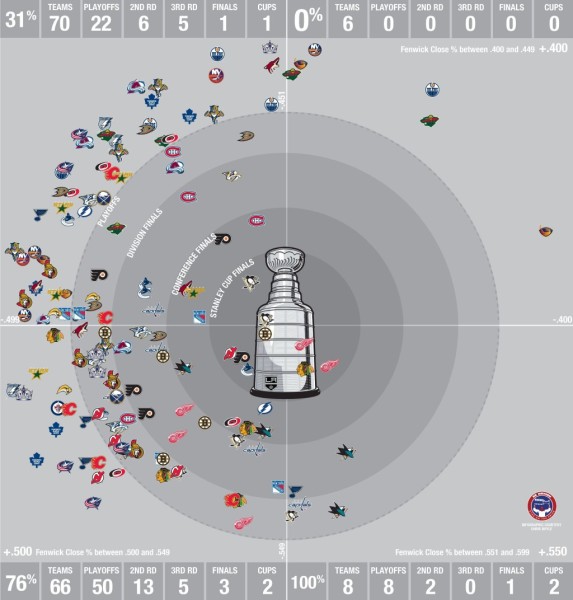 Source: Why possession matters: A visual guide to Fenwick

Currently the Canucks sit 15th in the league with a FF% of 50.8. (5v5, Tied). That’s right smack in the middle of the pack followed by elite teams Chicago, San Jose, Los Angeles, and more.

It gets extremely frightening when you look at the Canucks in different game situations:

The Canucks find themselves playing some of the best desperate hockey (when they’re down), but are very average when tied or leading. The best teams when leading are St. Louis, San Jose, Los Angeles, and Chicago.

Evidence Of This Lately

Let’s hope the Canucks do not repeat that puck possession horror next versus the St. Louis Blues.

More snipers, better first passes, zone entry, creating turnovers, shots, etc. The list can go on. But if the Canucks want to contend for the Cup, they better do something or find their Cinderella slipper.