Hockey season is in full swing for the Canucks and also for their prospects looking to build on last season and/or make a good first impression within the organization.

As with last year, we will have a monthly report breaking down some of the key prospects and their highlights throughout the season. This month we take a look at a couple of former first round picks in Brock Boeser and Hunter Shinkaruk, as well as their most recent fourth round pick Dmitry Zhukenov. 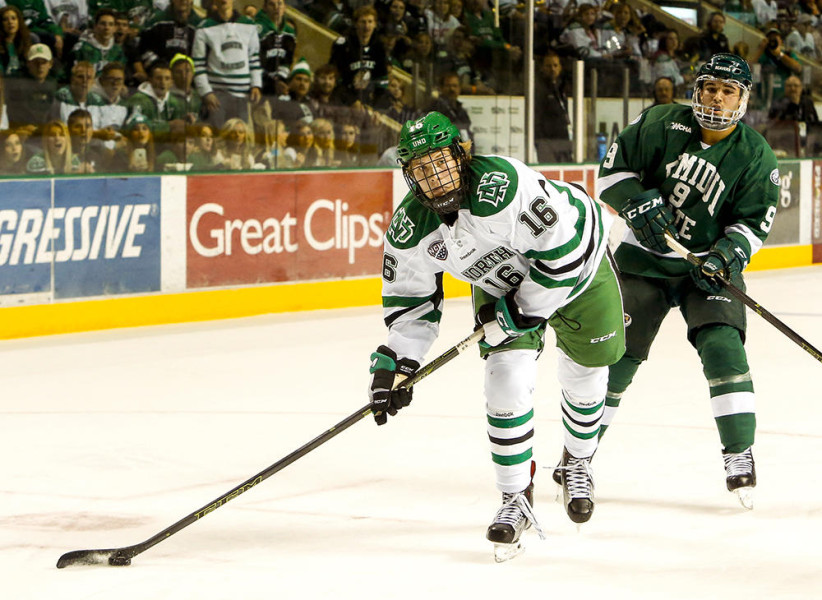 Brock Boeser will be fascinating to watch as he adapts to the increase in skill level and size of college hockey when compared to the USHL. With the majority of the top offensive forwards having now graduated to pro ranks, a lot of Canucks fans will be keeping close tabs on Boeser.

The Minnesota native started off his NCAA career with a bang, scoring a hat trick last weekend against Bemidji State. Boeser was the first University of North Dakota freshman to score a hat trick since Washington Capitals forward T.J. Oshie did it in 2005-06.

Above is Boeser’s first goal of the night. Watch as he uses his speed to separate himself from coverage and gets the first shot off. He recovers his rebound, circles the net and then picks the top corner on the goalie.

That goal displays why Boeser was so attractive to the Canucks in the 2015 Entry Draft. He has a combination of speed, size and offensive awareness to make his chances count. GM Jim Benning has said that Boeser is extremely dangerous from the circles down and the goal displays that. His other two goals that night were a tap in on a loose puck and an empty netter. Still good signs as Boeser gets himself into the dangerous areas and makes it count.

Unless something unforeseen happens, Boeser will be representing the USA at the World Juniors in December. 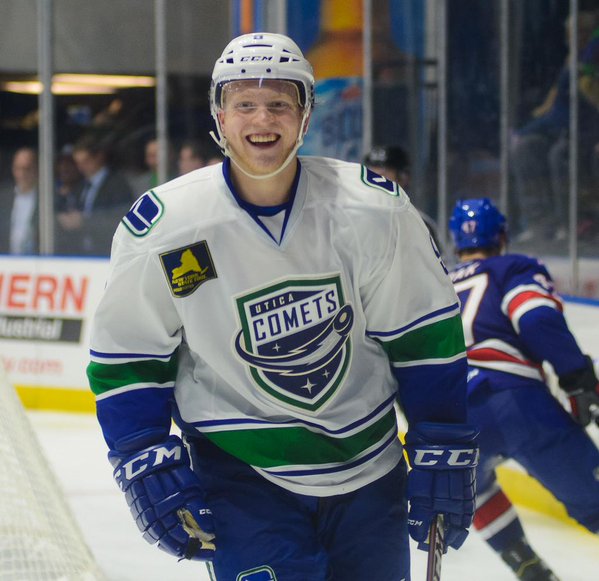 In the Top 10 Canucks Prospect Countdown before the season, I mentioned that a full summer of training and entering a second season of professional hockey was going to a great jumping point for Hunter Shinkaruk. That appears to be true as the native of Calgary has looked great to start the year for Utica. The Comets have scored five goals so far this year, and Shinkaruk has been a part of four of those with 3 goals and 1 assist.

The former first round pick’s first goal of the night on Wednesday was exactly why the Canucks drafted him. Shinkaruk dekes out one forward, then beats both defenders with speed and finishes with a nice shot.

His second goal of the night was scored on a good shot, top corner, after a nice passing play from Brendan Gaunce and Jordan Subban.

Shinkaruk received a pass from Jensen before converting on a backhand to complete the hat trick.

The Comets will look to make it back to the Calder Cup Finals this year. Rather than being led primarily by AHL veterans, as they were last year, this season’s edition of the Comets will be led by Canucks prospects. Shinkaruk will need to be a huge part of the offence for the Comets to have a successful season.

Many perceived Hunter Shinkaruk’s rookie season last year to be a disappointment, but there were quite a few things working against him. He played just 18 games in his last year of junior hockey, due to major hip surgery, which prevented him from being fully ready for the season while adapting to professional hockey. Shinkaruk just turned 21 last week, so he still has plenty of time to develop.

His late season surge last year should be seen as a very positive sign at the end of a season full of learning. His performance so far this season is a better sign as he looks to make himself as a call-up option sometime this year. 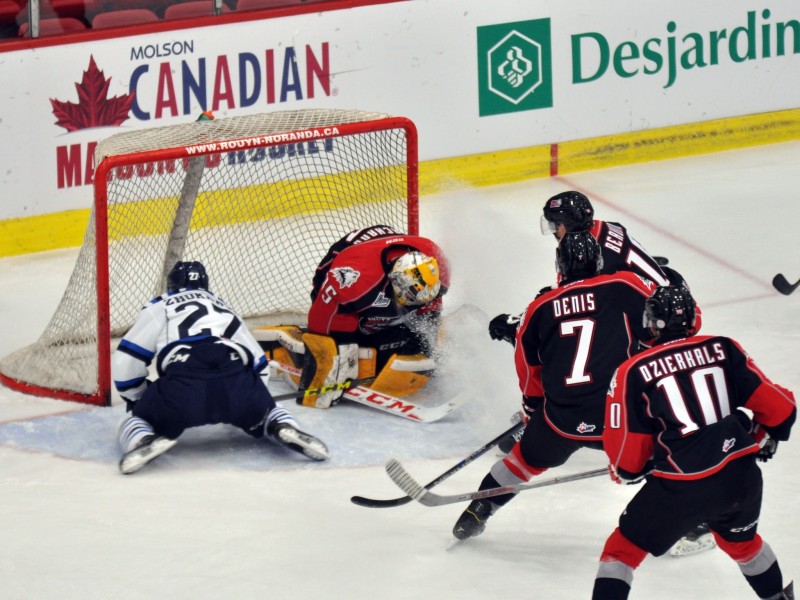 Selected 10th overall by Chicoutimi Saguenéens in the CHL Import Draft, Dmitry Zhukenov has begun the season well with 8 points (2-6-8) in 9 QMJHL games, this is after putting up 6 points in 5 preseason games. The Saguenéens started the season terribly with a 0-8-1 record in their first 9 games, but have since turned it around and are currently on a 4 game winning streak.

Zhukenov joined the team on September 25th and started on the wing, but was moved to centre on October 3rd and has been on fire since then.

The slight forward has been able to use his speed and hockey sense to create offence in the middle of the ice. One example of his speed is on his goal against Val D’or on October 4th:

A nice pass from the Chicoutimi defenceman allows Zhukenov maintain his speed to separate himself from the Val D’or defence. The Omsk, Russia native gets a good shot on net and bangs in the rebound. Great to see that he doesn’t just skate by the net, he finishes up on the play and makes sure he buries it.

Zhukenov is still generously listed as 176 pounds, so he will need to add some weight and strength to continue the grind of a full junior season and going forward. However, if this past two weeks of offensive output is what’s to come for the former fourth round pick, then the Canucks may have something here.