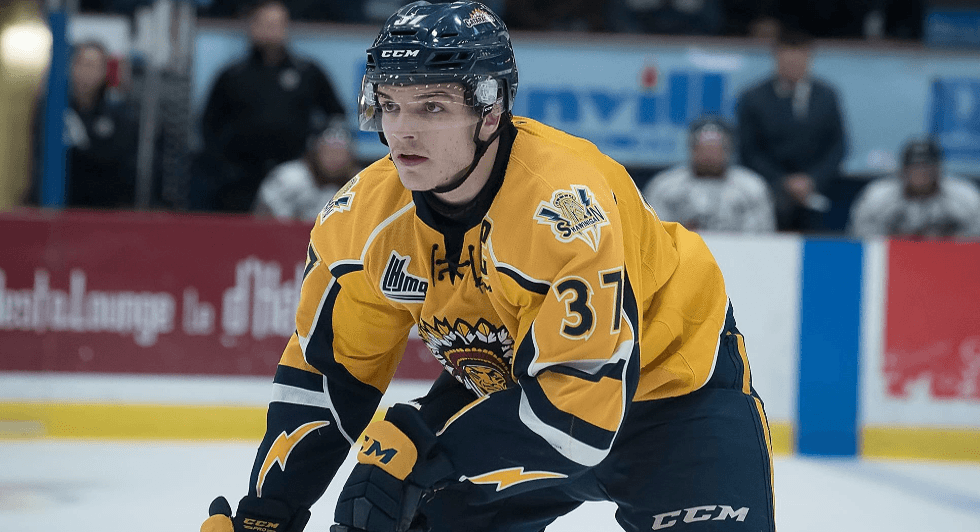 The Canucks held their summer development camp at UBC’s Doug Mitchell Thunderbird Sports Arena this past week, and it’s always an interesting experience for me.

Overlooking the rink were fans in their Canucks jersey, proving that yes, Vancouver still hasn’t turned as cynical as Twitter suggests they might be. Choosing to spend a couple of hours inside on a 27 degree sunny day in Vancouver is nothing to scoff at.

Ok maybe one guy was in there to cool down. Regardless.

In one corner the media gets together to share jokes or maybe gossip about the latest radio job news. Steve Darling was a big talking point this year. Also, if you ever get a chance to chat with Kevin Woodley, I urge you to do so. You’ll get more goalie technique insight in five minutes of talking with Kevin then you will have in 20 years of MSM coverage. I could listen to him talk goalies for hours, even if he doesn’t grasp how bad ass a desperation save is (he’s really into “making saves easy” and “not wasting movement” and “winning hockey games”. Pfft.)

The coaches on the ice are shouting out commands and giving advice, while the young players doing drill after drill as they try and catch the eye of anyone important watching. Sami Salo, a guest coach this year, looking beleaguered as ever (he always looks like he just survived some sort of Die Hard scenario), was a site for sore eyes. The guy can still bomb a slap shot with the best of them, as he showed on a couple of empty nets.

In fact, the Canucks summer development camp is such a well oiled machine, it’s easy to forget what’s at the heart of it; young kids trying to live out their NHL dream.

Many of them won’t.

But during these summer days, it’s fun to watch young players devoid of the cynicism that comes with being a pro athlete. Kids truly just happy to be there. Kids who haven’t had to give interviews to guys who just trashed them the night before in an article. It feels all so very innocent and reminds you of the base nature of hockey. The love of the game. It’s a refreshing energy to be around.

Asking Daniel Sedin “How did that game get away from you?” for the hundredth time kind of loses its allure after a while.

And sure, you have your Brock Boeser’s who are almost a lock to be NHL players. Boeser stood head and shoulders above everyone in camp. He looked like a ringer in beer league hockey going at half speed so he doesn’t get kicked out of the division for scoring too many goals.

But for every Boeser there are nine to 10 guys who are just hoping they can get a shot at the show.

One such player that stood out was Alexis D’Aoust, an invitee to last year’s summer development camp. He’s a player that just recently won himself a contract with Utica after scoring 215 points in 181 games with Shawinigan in the QMJHL over the past three seasons. He’s looking to earn himself an NHL contract this season.

Watching the drills, he stood out because he was quick. Because he had a hard, accurate shot. And because even though he’s not a very tall guy, other players had a hell of a time trying to knock the puck off his stick.

Every time the 6-foot-0, 200-pound winger had the puck it looked like he was making things happen, spinning off checks, making some sweet magic passes with Zack MacEwen, another Utica Comets hopeful.

“Yeah it’s been one of my qualities since I was young, I’m really good at shielding the puck,” Alexis explained. “I’m trying to work on being strong on my legs and keeping the puck away from the opponent, and I think it’s an asset that I have in my game that helps me a lot to win battles along the way and creating space from other players.”

You would think walking into a camp being a relative unknown might be stressful for Alexis. But for the young man from Trois-Rivieres, last year’s experience at camp made this year far easier.

“Last year was an invite, so I didn’t know what to expect, because I’ve never been to an NHL camp before. Every day was a new day, and every day I had to prove myself. I didn’t have anything, I was only an invite. My goal was to get a contract to show them I could play at this level. I had tons of pressure, but it was good pressure.

“I kind of knew what to expect coming in this year, so I was a lot more confident than I was last year. I know what I’m able to do, and I’m trying to stay in that zone in what I’m pretty good at. I’m fast, I have a good shot, and I have good skills, so I’m trying to show that on the ice.”

When you watch D’Aoust, it’s hard not to notice his offensive skills. But as good as he can be on the offensive side of things, one of the knocks on D’Aoust has been on the other side of the rink; his defensive game. It is an area of concern he is well aware of and one that he knows he needs to continue to improve upon.

“I have to work on my defensive game and also being more physical. It doesn’t mean giving a big check, but using more of my body to forecheck, using my body to take the puck away from the opponent.”

When you talk to the 21-year-old, you don’t get the feeling he’s feeding you cliche answers. He’s not just telling you “yeah I need to work my defence” and feeding you lines. He breaks down how he needs to be better positionally, and how he needs more upper body strength. A challenge he feels is well prepared for.

“I feel like I’m stronger physically, stronger mentally. I know what to expect. I’m more confident, I’m more ready this year than last year. I had to be a bit stronger in the upper body because it’s professional hockey, everyone is stronger.

“The past seven years I work on the ice in the summer with Steve Larouche (ex NHL player) and Pierre (the last name was lost in a heavy french accent, my apologies. He was also an ex NHL player), we work a lot on technical stuff with shooting. I worked a lot on shooting movements. I scored a lot of goals like that in junior because of that, because of that quick release. I’m trying to always be faster.”

Yes, the French-Canadian accent is the same as another former Dragon Slaying Canuck, which makes for an easy comparison. But when you talk to D’Aoust, it’s hard not to picture a young Alex Burrows.

Both young men who grew up in small towns near Montreal (their hometowns are actually only two hours apart). Both undrafted kids, working their way up through the system. Both kids with skills, but both need to use speed and energy to play a different style of game to get noticed, before they can put their good shot on display. Both willing to do any role asked of them by their team.

“I want to play in Utica, and my goal is to have a good year and show them I can play at this level, then higher after that. I’ll be a guy that’s good offensively, but I can get in on the puck quick, and winning battles along the wall, and where it counts around the net, I’m good at that.”

Yes, name dropping is always a horrifying thing for some people, and nobody is suggesting he is the next Alex Burrows. But the blueprint he’s following is the same one that the Game 7 hero laid out for undrafted skilled players.

It’s going to be fun to watch and see if he can pull it off.