Tuesday’s game against Winnipeg was never going to be an easy assignment for Vancouver. Earlier in the evening, L.A. beat the Rangers, keeping them firmly in the hunt for a playoff spot with 86 points.

The Canucks made it tougher on themselves by going down 2-0 five minutes into the second period. Luckily they had Ronalds Kenins in the lineup.

Two shifts after that second Winnipeg goal, Kenins came onto the ice with Bo Horvat and Jannik Hansen, and opposite to what the Canucks had done so far in the game, they played with intensity and determination. That shift was the TSN (and VCB) turning point as it woke up the Sedins who had a great shift of their own. All of a sudden Vancouver was alive and kicking.

The Canucks came back from 2-0 to win by a final 5-2 score. It’s as close to a playoff win as you can get during the regular season.

1. Vrbata has his own tricks

We haven’t talked enough about Radim Vrbata in the SixPack. Not enough for how well he’s played.

He scored another two goals Tuesday. The second was an empty netter, but the first – well it might as well have been worth two goals.

What’s amazing is that both Henrik and Daniel got assists on the goal, and while they’re usually the ones providing free points to whoever touches the puck in their mesmerizing cycles, this one was completely the other way around. Sure they worked hard, but Vrbata skated the puck from the left boards across the front of the net, bagging a couple of free points for each Sedin.

That Vrbata goal (Vancouver’s third) was a follow up to one of his prettiest passes all season that led to Vancouver’s first goal.

Vrbata also drew the penalty leading to the power play that allowed Vancouver to score their second goal, causing this exchange.

One more thing: Vrbata’s tied for 10th in NHL goal-scoring with 29 goals.

For a guy who came to the Canucks as a power play specialist, Yannick Weber hasn’t seen much time on the first power play unit.

That’s quite ridiculous considering how bad the power play has looked, and how in need of a point man/power play quarterback the unit has been.

Against the Jets, Weber finally got a look with the big guys, and he was amazing. Like the second coming of Christian Ehrhoff amazing. I was writing a tweet about the three chances he’d already created, and how he hadn’t yet made a wrong play with the puck, while he was making the Jets go dizzy passing back and forth with Henrik and Edler, and eventually scoring his goal.

Helped a bit by Radim Vrbata and an empty net, the Sedins had a great night on the scoreboard. Daniel put up two assists, while Henrik bagged a goal and two assists. And here are the updated points standings as of Tuesday’s games. 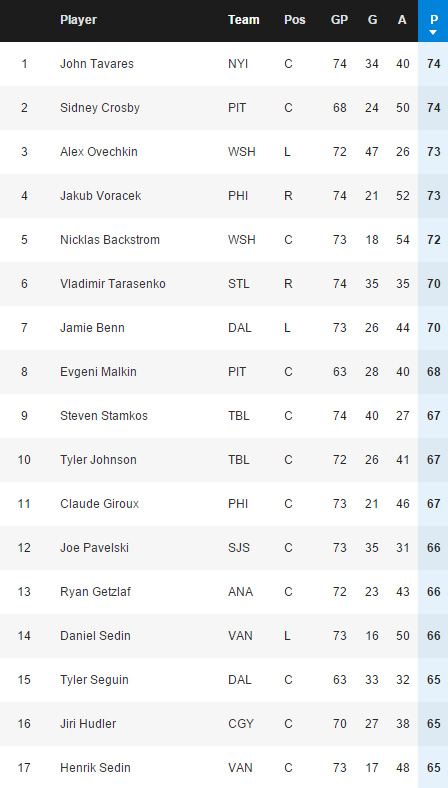 As unbelievable as it sounds, earlier this season TSN 1040’s Dave Pratt and Bro Jake were arguing about whether the Sedins are worth their contracts ($7M/year).

At 34, the twins are proving they’re still elite talents, and they’re not going anywhere despite hitting their mid-30s. And to borrow a saying from Pratt, he’s proving he still “doesn’t get IT.”

Something happened today. Something big.

The Canucks locked in Chris Tanev, arguably the team’s best defenceman, for five years with his contract ending after this season.

Lack on Tanev – “Seems like yesterday we were in Winnipeg he was sitting there in his Grinch pyjamas, now he’s a millionaire.” #Canucks

At an average of $4.45 million per year, it’s big money for a defensive defenceman and it led a bunch of media guys saying advanced stats must’ve played a large role in negotiations.

Off the top of my head is Tanev the best example of an enhanced stat contract in the NHL? Really no traditional stats in his favour..

Sure, agents are now using advanced stats since they’ve become widely accepted, but do you really think Tanev wouldn’t have scored this contract without them?

Consider that eight years ago Vancouver signed Willie Mitchell – another notable defensive defenceman – at $3.5 million for 4 years and no one objected to the contract. No agents were using advanced stats in negotiations back then, yet defence was still valued.

One more from Eddie from after the game:

Lack on save in the first – “Tanev fell there, I think his pockets were a little heavy there.” #Canucks

Farhan Lalji created quite a stir last week when he tweeted Ryan Miller wouldn’t begin skating for three more weeks. Before that, the thought was Miller might get in a couple of regular season games, potentially being ready to be the starter in the postseason.

But Lalji painted a different picture. Our mental images of Miller working hard in rehab were replaced by him sitting with his legs up at home, unable to walk on that knee, let alone skate, let alone practice.

Miller wasn’t skating, meaning there was no way he’d play before the playoffs, meaning Eddie Lack was the man.

The following day Willie Desjardins downplayed the speculation, saying Miller was right on track – he was already skating. Lalji cleared everything up, saying he meant “practicing with the team” when he said “skating.”

This morning, we received more updates on Miller.

Trevor Linden was on TSN 1040 Tuesday. He confirmed Miller is 7-10 days from practicing with the rest of the team, and he could play again this season with a knee brace.

Basically nothing about Miller’s recovery timeline changed from before Farhan’s report. Leaving us with this look on our faces.

When Lack took over for Miller a month ago, a bunch of Canucks fans wondered if he’d be able to do the job.

Four weeks later, he’s stolen at least five wins from opponents, and he is one of the main reasons the Canucks have solidified their spot in the standings. And he’s made a believer out of the fans.

Serious man crush I have right now,, I’d probably bang both @TheRock and @eddielack !! And maybe not in that order.. #Canucks #vcbcanucks

But all along the way, there’s been one fan whose loyalty, whose die-hard fandom, whose unwavering belief (in the other guy) has never faltered even for a second.

And on Tuesday it all paid off.

Hmm, let’s break it down Jovan. Everytime Lack lets in a goal, you tweet something to the effect of “a goalie’s gotta have that.”

Lack’s been making incredible saves for weeks to help your favourite team make the playoffs and all you can talk about is the goals he lets in. If that doesn’t deserve a block, I don’t know what does.