After losing 6-3 to Buffalo – the worst team in the NHL – on Thursday, Vancouver needed to bounce back.

The problem is they had to do it against the team with the fourth highest point total in the NHL. Not only that, the Blues have scored the fifth-highest goals/game this season.

Tough proposition, yet wildly exciting for some reason.

Much to Canucks fans’ dismay, St. Louis showed their offensive potency on Sunday.

When I said I liked exciting games, this is NOT what I meant. #Canucks

The game was a roller coaster ride, a back-and-forth battle, and a nightmare for Canucks fans.

After letting in 2 goals early, the Canucks stormed back with 5 straight. If you thought they’d guide home a 5-2 win from there, you were wrong, as St. Louis battled back, forcing overtime and then the shootout.

Vancouver won in the end – a 6-5 SO victory, but they nearly gave the city’s hockey fans heart attacks in the process.

I haven’t jumped into Wyatt’s (@TheStanchion) “Vrbata the Assassin” thread too often this year, but I can’t avoid it tonight. 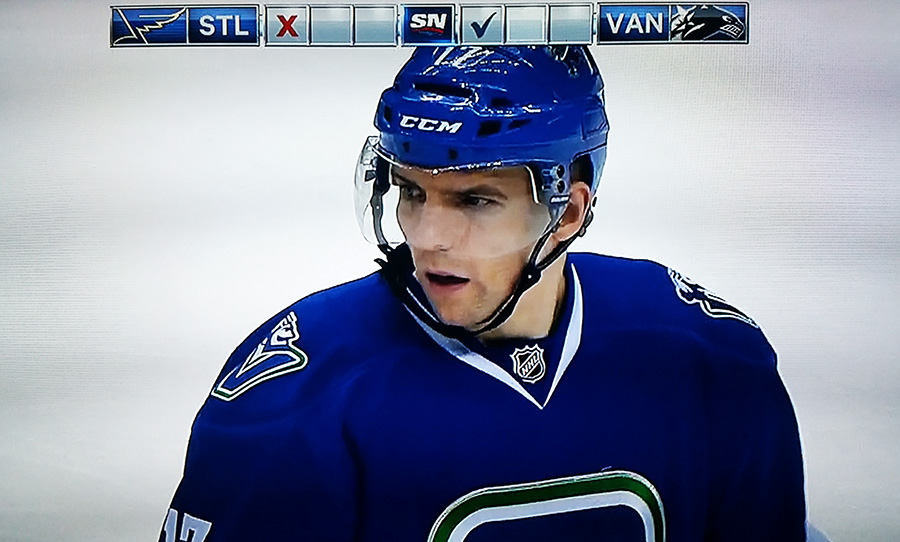 The Canucks went 3-0 in shootout attempts, with Nick Bonino, Radim Vrbata and Chris Higgins all scoring in that order. Quite the change from watching Canucks shootouts in the past few years.

There was quite a bit of talk earlier this season about how the Sedins aren’t able to play their game against the best teams or the strongest defencemen.

They’ve been silencing all that BS in the last month – Henrik put up the second-highest point total in the entire league (14) in February.

They continued that charge against the Blues, looking dangerous from the start of the game. Here’s Henrik’s goal, scored during the second period.

While that was the highlight moment of their game, their best shifts were in overtime. With Lack shaken (more on that later), and the team looking panicked in front of him, Henrik and Daniel came out and played their shifts like experts performing brain surgery.

They were calm and cool and they set the tone for their teammates, right after the Blues twice hit the posts on Eddie Lack’s net, and it looked as if it would be only a matter of time until St. Louis scored.

Henrik and Daniel’s linemate Zack Kassian did what only he can do. He was a force to be reckoned with. Offensively you saw it above on Henrik’s goal.

Jake Allen was too concerned with Kassian to stop the initial shot, hank pops in the rebound. #Canucks

Kassian celebrating in the face of Lehtera. #Canucks https://t.co/FjpFSweWFA

Earlier in the second, Kassian brought his other skillset to the table – he played the intimidator, and he played it well. Kass got into a scrap with Ryan Reaves, with each throwing a cheapshot at the other. They continued to yell at each other in the penalty boxes throughout their entire 10-minute misconducts.

There are many Canucks fans hoping Kassian doesn’t get traded before Monday’s deadline.

Kassian so helpful to the team in games like this

Makes sense. And those who said he’s better suited to being a playmaker than a power forward? No, he’s a great playmaker who no one can mess with. And that’s why the Canucks should be reluctant to let him go.

After the quick first two St. Louis goals, Twitter was ready to go into tank mode before the trade deadline, as well as throw Lack to the wolves.

This one’s funny in a brainless way because it includes the hashtag #GoalieGraveyard while exhibiting exactly why Vancouver is a goalie graveyard.

After those two goals, Lack turned it around, stoning the Blues multiple times until they scored halfway through the third. But the fourth goal looked as if it took him back to the New York Islanders game last year.

He should’ve had it. He looked rattled, and he looked completely unconfident for the rest of the game.

During overtime, the Blues hit the posts behind him twice, and it almost felt inevitable that he’d be beaten again.

Good thing about Lack is he’s shown the mental ability to bounce back quickly. Now he has to show he can do it for a full 60 minutes with no letdowns.

Jannik Hansen’s goal was a roller coaster ride in itself. First, the whistle blew, then the puck went in, then they went upstairs.

Not a person watching thought it would count, because we all heard the whistle. It was a quick whistle, and Hansen had been robbed, but hey, the ref blew it down and them’s the breaks, right?

Wrong. As per the new, expanded NHL rule 38.4 (as tweeted by Blake Price):

The new expanded rule will also allow Hockey Operations to provide guidance to referees on goal and potential goal plays where the referee has blown his whistle (or intended to blow his whistle) after having lost sight of the puck.

Can’t believe we got that call.. Right call tho.. #vcbcanucks #winning pic.twitter.com/EiRNyXh8aO

After Jake Allen allowed four goals in the first two periods, Brian Elliott started the third for the Blues. That was normal, fine, regular stuff for any hockey game. Then Elliott allowed the Blues fifth goal, and a bit of chaos ensued.

Big scene at the Blues bench.. Elliott just pulled himself, and Hitchcock grabbed him.. Elliott knocks Hitch’s hand away and storms off..

Garrett: “The mental part of the game which is so important to goaltenders – Ken (Hitchcock) doesn’t care much about that. Just win baby.”

So what really happened? We found out after the game.

Did Elliott pull himself out? Hitch: “No, that was me … he was mad he was coming out. I just told him to relax.”

Telling a goalie to relax after pulling him after he allowed one goal? Not sure many would be calm in that situation. Garrett’s right about Hitch not giving a crap about his goalie’s mental state.

As you may or may not have noticed above, Ronalds Kenins had two nice assists – one on Henrik’s goal, and one on Hansen’s. He’s doing his thing.

Daniel Wagner did his thing too.

They each have an assist. RT @THockeyGamer: Just got home, how are Ronald Kenin and his clone doing? #Canucks

Sportsnet aired the Gordie Howe Special today, where some well-respected hockey players shared their personal stories about Mr. Hockey. It was a nice tribute to who many still consider the greatest hockey player ever.

Wayne Gretzky shared this story that had everyone in attendance roaring:

“We were 20 years old, and trust me, I was really nervous. We were sitting there, and that was still the time of the Cold War, and I’ll never forget we came away from the luncheon and my dad said to me, ‘What was the one thing you remember about the luncheon?’ and I said, ‘President Reagan turned to Gordie Howe and he said, “You know what, Gordie? I don’t trust those effin Russians.”‘ and I said, ‘I heard the President of the United States swear.’