After going down 3-0 early and losing 6-2 to San Jose Tuesday, the Canucks wanted and needed to do better this time around.

That didn’t make the Sharks any easier to play against on Saturday – the game was a battle on the score board and in the trenches (I’m saying there was lots of rough stuff in case you didn’t get it).

The Canucks came back from a 2-0 deficit and won 3-2. For most of the game, San Jose had more puck possession and applied more pressure.

So how did the Canucks win?

Three beautiful finishes, some incredible goaltending, and one of the worst misses in the history of the universe.

You’ll see it all below.

There’s a reason Radim Vibrate has scored 20 or more goals in 5 of his NHL seasons so far. It’s his hands. Check them out Vibrate’s first goal of the game.

Quick breakdown: it looks like he’s going around the net, he changes directions and goes back shortside catching everyone on the ice by surprise, including Antti Niemi.

His description of the goal after the game (to the CBC): “When I got it there, I didn’t have anything else to shoot (at), so I thought I’d go around him and try to stuff it from behind. I’m glad it worked.”

Oh, and why Vibrate?

That. Is. HUGE. Vibrate scored with 39 seconds left in 1st and the #Canucks are alive. They cut the Sharks lead to 2-1.

After the Canucks twitter account renamed him Vibrate (they quickly corrected themselves, saying autocorrect caused the mistake), I said we should call him Vibrate from now on.

Soon after, I realized it’s nowhere near a cool enough name for the Canucks’ highest scorer (he got to 25 goals Saturday).

Also, I would’ve included the tweet where I said we should call him Vibrate, but I got called out for putting my tweets in here.

@RobTheHockeyGuy @elcorazonazul you know me so well. Thats almost as bad as @omarcanuck putting his own tweets in the six pack

I thought you loved it!

Back to Radim the Dream – he scored a second goal, and it was just as, if not more of a pure snipe job than the first.

Such patience, such a perfect shot.

While Radim the Dream scored a couple of serious snipe jobs, Bo Horvat might’ve outdone both with his.

First, when Horvat pressed his turbo button and blew by Brent Burns, I thought it had to be Jannik Hansen – that’s how fast he was.

Second, as soon as he had that step, Horvat had his head up the entire way. He saw Antti Niemi go down and he sneakily chipped it over him.

Making that play at top speed with a two defensemen chasing you down… that’s the goal of the night, no debate.

Another massive contributor to Vancouver’s win tonight is not even a member of the Canucks roster.

Patrick Marleau might have had the worst missed opportunity of the season with his whiff in the second period.

I liked this reaction.

But this one was better.

Should note Shapsquatch wasn’t the only one to figure out the apparently obvious MarLOL tweet. There were a lot of them. I have no idea who did it first.

Vrbata had a huge night for the Canucks, and you can see it in the C+/- column (Corsi +/- all situations) here (these are from war-on-ice.com). 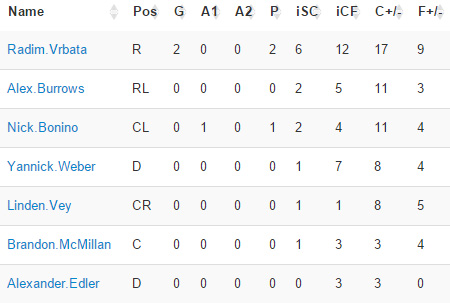 But he was nowhere near the force Joe Thornton was. 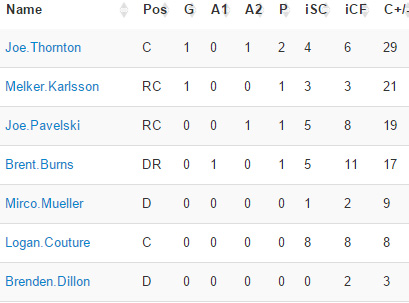 Thornton was a monster like the Hulk, not like Mike from Monsters Inc. Funny how much fire he comes under when people talk about the Sharks’ failures, when he’s been their leader and most consistent player for years.

With Chris Higgins out with a “lower body injury,” Willie decided to dress Brandon McMillan instead of Ronalds Kenins. It’s strange considering how well Kenins has played – how he goes out and plays every shift like it may be his last. Really, Kenins has been a bigger, harder hitting Dorsett, with slightly better hands.

But Willie had his reasons.

Desjardins on Kenins: “He hasn’t played as well the last three games and he was so good early. That’s the tough part for a young guy. (1/2)

OK, so maybe Kenins had a couple of games where he didn’t make fans jump out of their seats wanting to chant his name in their living rooms, but he definitely wasn’t bad.

Did Ronalds Kenins ever strike you as a guy that needed tough love via a healthy scratch? Just so confusing.

Willie is considered a “player’s coach.” He’s positive, he’s works with them to get their games going, and he appears to know what makes them tick. But his treatment of Zack Kassian was off – he repeatedly benched a guy who plays on confidence, thereby lowering his confidence.

His treatment of Kenins? Perhaps it’s not about Kenins at all. He wanted to get McMillan back in and get him going, and he had to scratch someone. Kassian doesn’t make sense anymore, and he respects his veterans too much to scratch them, so Kenins it was.

McMillan, btw, led the Canucks with 3 hits and drew a key penalty during the second, so he did his part. Don’t think anyone’s thinking he’s an upgrade on Kenins, though.

Saturday’s game against the Sharks – now THAT was an upgrade (on Vancouver’s last two losses against them).