You know things are bad for the team when media members are tweeting things like this before the game.

Why was it such a tough assignment for Eddie?

The Canucks were missing three of their top-4 defensemen. Chris Tanev, Alex Edler and Kevin Bieksa – all were injured and out of the lineup.

If Jim Benning learned anything from looking back at Mike Gillis’ tenure in Vancouver, you’d hope it would be this: you can never have enough defensive depth.

Judging from the past, if the Canucks started the season with 20 NHL-calibre defensemen, they’d still be lucky to get to the playoffs with two of them.

And who did the hockey gods choose to keep completely healthy all season for the Canucks? Luca Sbisa.

Oh those hockey gods. They’re funnier than Eddie Murphy is these days, that’s for sure.

What do they lose with Edler? They lose the guy who’s best at playing Willie Desjardins’ system. Edler is great at pinching in the offensive end, and when his duo gets caught deep, he bails the team out over and over again.

Also, to use a Torts-ism: Edler makes the team “stiffer”.

No. Not like that. Harder to play against, I mean.

You’ll get more on the defensive injuries from Jim Benning later.

That was a hell of a performance by two teams desperate for the two points.

There was end-to-end action. There were huge hits (mostly from Ronalds Kenins). The Sedins were great. So was Lack.

No Alex Edler? No worries. Check out the game’s three stars: 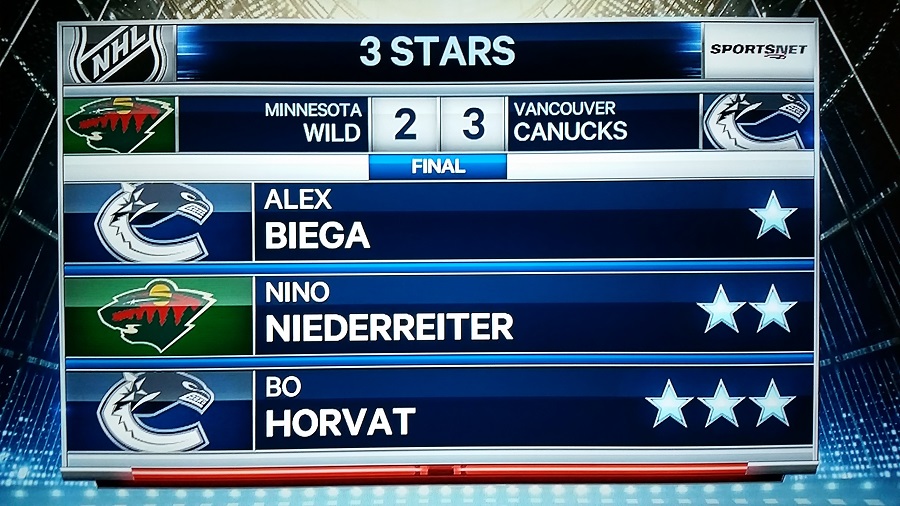 Jay tweeted this right before the game.

But Alex Biega scored the game-winning goal in his first NHL game.

I take it back. Biega is Bieksa plus #vcbcanucks #canucks

That’s okay Gary. How were you to know?

The Sedins have been playing inspired hockey lately. They look 5 years younger the way they’re forechecking and dominating the boards.

Ronalds Kenins has been making Canucks fans wish he WAS plural since his debut Jan. 30.

Kenins has been running around hitting everything that moves. Teammates feed off that kind of energy. They get inspired by it. All the bottom six forwards appear to have taken his energy as a challenge and have been bringing it themselves lately.

Another guy who looks inspired is Alex Burrows. Against the Wild Monday, he was forechecking, being tenacious and creating turnovers. The Sedins just had to follow his lead, and they definitely did that.

Sprung by Alex Burrows, Daniel hooked up with Hank to score the Canucks first goal of the game:

And we didn’t show Biega’s first goal earlier because although it was a great finish it was more due to Henrik’s and Burr’s hard work.

Daniel shooting instead of passing when he was 3 feet in front of the net and being physical scares me. I don't like change. #Canucks

Botch goes into why Burr yelled in Devan Dubnyk’s face in the Provies.

Eddie Lack didn’t get Saturday’s start against Calgary like many including he expected.

On Monday, most (including Lack again) expected Ryan Miller to get the start. So of course Desjardins went with Lack.

The Canucks had a 3-1 lead after Biega’s goal halfway through the third, but when Nino Niederreiter pulled the game to 3-2 at the 13 minute mark, more than a few Canucks fans hoped Lack wouldn’t do what he did against Chicago last week.

The Wild came on strong at the end of the game, especially in the last minute, but Lack stood his ground.

I think Eddie Lack was the only person in Vancouver who maintained a normal resting heart rate during that goal mouth scramble.

Earlier in the game, Lack made this strange save.

But most of them were great reactionary saves like this pad save off a tip right in front of him.

President Linden was on TV during the first intermission of the game. Sportsnet’s Dan Murphy asked his take on attendance at Rogers Arena.

“It’s been good. Obviously we came into a difficult situation and we’re working at it… I think there’s still a bit of a wait and see attitude out there and we’ve got to prove it to them that we’re for real. Obviously we’re doing everything we can to make that happen.”

Murph also asked how important making the playoffs is to the team.

“It’s definitely our goal, it’s what we want to do. We want to develop our players in a winning environment. We want to bring playoff hockey back to Vancouver and we want to be competitive. The moves we made in the summer were not only to get younger and deeper but they were also to make the playoffs.”

If the Sedins keep playing like they have been, the stretch drive and playoffs might be fun.

Sportsnet followed up Trevor Linden’s first-period interview by having Jim Benning on during the second.

First on Edler and Tanev:

“The game against Calgary the other night, (Edler) slid into the boards. We don’t think he’s going to be out a long time, but he could miss a week or so… with Chris Tanev, he slid into the goal post. He skated this morning, we thought he was going to play tonight, but he didn’t feel good after, so I think he’ll be day-to-day.”

Murph asked if there have been any recent phone calls on Zack Kassian.

“Teams have called, but he’s back playing the way we want him to play. He’s playing physical. He’s taking the puck to the net. He’s standing in front of the net and getting dirty goals. This is what we wanted from Zack all year. He’s played like that for the last five games and we’re hoping he can keep it up.”

Also, on Tanev’s contract negotiations, Benning said he’ll be meeting with Tanev’s representatives again in the next couple of weeks. He said they’ll continue negotiating and “hopefully get something done”.

A huge 3-2 win over the Wild and Tanev’s going to be signed soon? If you have a happy dance, this would be a good time to do it.