On Sunday, the Calgary Flames hosted their first playoff game in six years. Their crowd was amped. The team was amped. And they played like they were shot out of a cannon.

The Flames played like they were determined to win the game. They threw traffic in front of Eddie Lack and they were so truculent Brian Burke must’ve experienced ecstasy as he lived his wildest happy fantasy.

For their part, the Canucks handled the pressure and had their chances too. They outshot the Flames through two periods and were down only 2-1.

The closing period was a different story, though – this fan on Twitter used this picture to describe the second, but it would’ve been better saved for the third.

The Canucks ended up losing 4-2, and while being down 2-1 is a huge worry, the potential suspensions coming to Vancouver will only add to Canucks fans’ insomnia.

Like I said, Vancouver outshot Calgary in the first period and the Sedins were once again creating glorious chances against Jonas Hiller.

Unfortunately for the Canucks, Luca Sbisa played the type of defense we’ve become accustomed to. Here he is in front of Eddie Lack as Brandon Bollig shoots the puck on Calgary’s first goal. 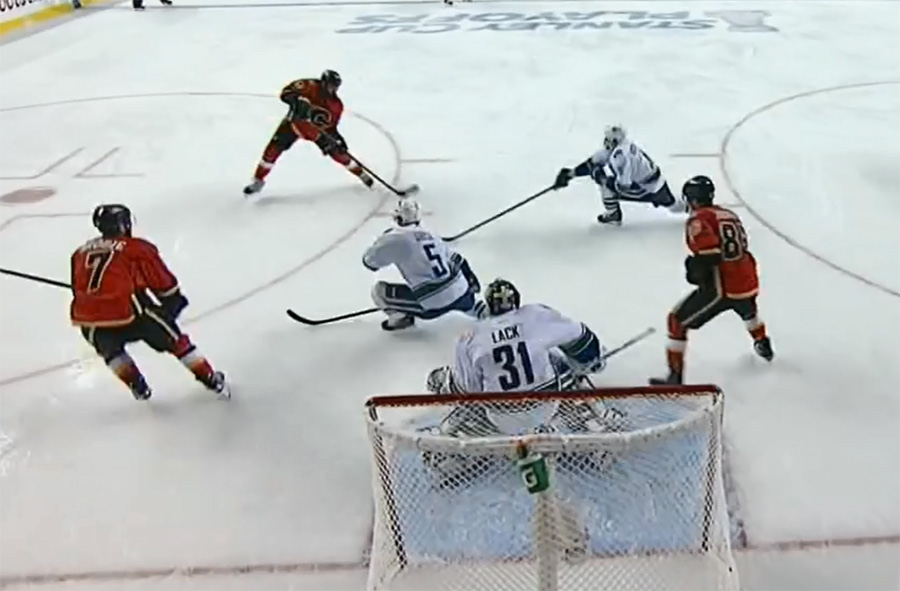 A crappy attempt to block? A great attempt to screen? Your guess is as good as mine. Either way, it put the Canucks in a hole they could never quite climb out of.

Sbisa followed this up with a terrible offensive play. He took the puck inside the offensive blue line, brought it out and back in himself, and put his team offside.

Those two bungles were enough to make you wish the Canucks had locked Sbisa up literally, rather than to a long-term contract.

Before I go on, realize I’m rarely one to pile on a player. Vancouver does enough of that without my helping on this website. (Let’s be honest, Canucks fans love having a scapegoat more than they love complaining about the rain, and that’s saying something).

Usually, the scapegoat has a good history. Often he bounces back.

Does Sbisa have a good history? No. Will he bounce to higher heights than ever before? Your guess is as good as mine. For the record, my guess is no.

Anyways, let’s get back to piling on Sbisa.

If you were following the #Canucks game on Twitter while watching the game, you’d know Sbisa is about as popular in Vancouver as Michael Ferland right now.

How did Sbisa get a contract extension AND a raise? It’s like if a chef murdered a bunch of people and they gave him his own restaurant.

Sbisa is playing the worst game I have ever seen from an NHL Dman… Get Stanton a plane ticket ASAP. #Canucks #vcbcanucks

I’m not even sure which team sbisa and bieksa are playing for anymore…. #Canucks

Even long-time Flames beat writer, Bruce Dowbiggin was ripping on him.

@ThomasDrance But he’s got a nice new contract.

Hopefully you understand why I’m saying Sbisa needs a mask to walk around Vancouver now. I may not think he plays great defense, but I don’t want him to get mugged (or more likely booed) at the airport either.

3. Hammer and Burrows could be in trouble

It’s good to see Dan Hamhuis playing with a serious edge, but he may have gone too far late in the third period.

Hammer was likely trying to lay a clean, hard check on Sam Bennett, but he didn’t let up and he definitely got Bennett in the head. 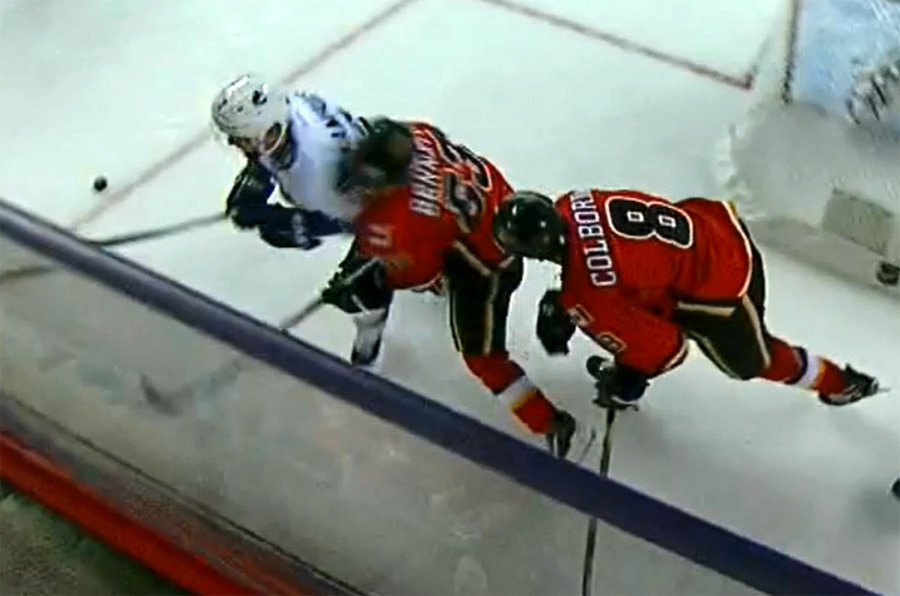 Since I only have questions on that, let’s move on to Alex Burrows.

At first glance, it looked horrible, but if you look at the replay from the opposite angle (at the 53s mark of this clip), you see Gaudreau wasn’t launched into the boards at all.

That’s not the worry here, though. The real problem is how Burr went straight to Kris Russell and instigated a fight with him right after the hit.

According to NHL rules, any player who gets an instigator penalty in the last 5m of a game gets an automatic one-game suspension. We did just see the NHL rescind Deryk Engelland’s have his potential suspension for too many misconducts, so the league may be lenient here.

My guess is they’ll see how the series is boiling over and won’t punish Vancouver by taking out an impact player for something both teams are a part of.

Lack wasn’t the problem in this game. Not at all. He was screened on the first two Flames goals and the fourth was a bar-down shot on a 5-on-3 penalty kill.

You could find fault with him on the third goal, though. He didn’t follow the shot off Joe Colbourne’s stick and didn’t find the puck until it was too late and Sam Bennett was shoveling it in behind him. But that’s one miss, not all of them – and he played well after allowing the fourth goal too.

Course, now that the Canucks are down 2-1 in the series, there will be many who suggest Ryan Miller should start Game 4.

Kevin Woodley – a goaltending expert who always has his ears close to the decision makers in Vancouver – doesn’t think so.

With all due respect if you are asking who the Canucks are starting in goal next game, you haven’t been paying close enough attention

And this guy from another blog usually has balanced viewpoints as well.

No, Ryan Miller should not start Game 4. Stop it.

Let’s get one thing straight – Lack doesn’t deserve to be yanked. The worry is Willie Desjardins’ mindset. All season he went back to Miller over and over again, despite bad play, despite back-to-backs, just to avoid goaltending controversies. He showed stunning resolve in keeping his number one happy.

Going on that, Desjardins may very well go back to his veteran goaltender.

Keep in mind how down on his own recovery Miller was last time he spoke about it. Most likely he won’t feel comfortable jumping in now.

VCB and Canucks fans have been giving Eddie Lack tons of attention in the SixPack, in Rogers Arena and even on Twitter. It makes sense considering he’s been the starter for so long now.

But back to Ryan Miller – we caught him looking a little bored midway through Game 2.

All #Canucks players were wide awake and into the game tonight except this poor fellow pic.twitter.com/Fk5VfPTEdo

Rachel had a good excuse to get him off the hook.

@omarcanuck hey, to be fair he’s got a newborn at home

Miller woke up near the end of the third period, though. First, he enjoyed listening to Dorsett and Bieksa trash talking the Flames bench. 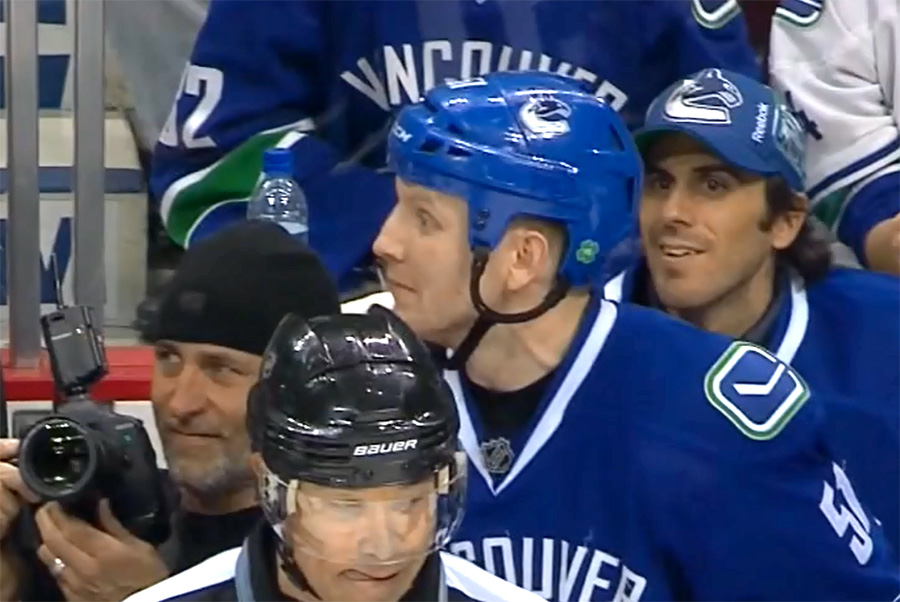 Would’ve loved to hear what they were saying – don’t know if Bieksa was telling the truth here, but it’s still funny.

Bieksa says he told Ferland he wasn’t as scary as McGrattan or Westgarth.

Later, when Ferland skated by the Canucks bench, Miller got into it himself. 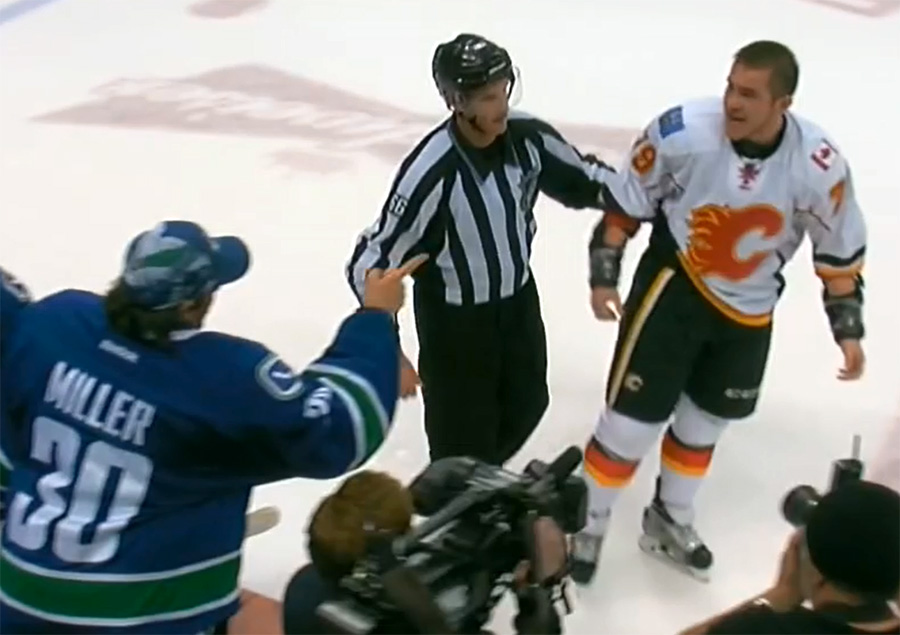 My guess on what Miller said: “You woke me up from my nap a**hole!”

Don’t know why I did it, but I looked through the #Flames feed.

Oprah over Bieksa? Doesn’t get lower than that.

Nope, but I’ll bet you Bieksa’s got his number.

The most amazing thing about tonight was that my respect for Burrows and Bieksa was able to decrease from 0, into the negatives. #Flames

Hey at least you know their names. Who’s that guy on the Flames again? Ferklund? (please ignore that I talked about him using correct spelling earlier in this post for trashtalk purposes)

Anyways, that’s enough of that.

Fear not Canucks fans – Calgary played with the pent-up burst of a six-year (playoff) slump, and they won the game. In Game 4, the Canucks will be back. And it’ll be a fun one to watch.