Playing the Lightning, Stars and Avalanche, Vancouver looked like a team made up of slugs and turtles. With those losses fresh, you can’t blame fans for expecting Alex Ovechkin and his speedy Capitals to skate circles around the Canucks Sunday.

But they didn’t. Now, we could be Negative Nancys and say the Caps were obviously tired because they played in Calgary Saturday night… but that would be lame.

So let’s be Positive Pablos instead (Oh come on… what name would you choose to go with positive??).

The Canucks dominated Washington, leading them in shots 34-22, goals 4-2, and most surprisingly in the faceoff circle 31-30.

Being the optimists that we are, let’s call it what it is: a massive statement game that shows the Canucks are a playoff contender.

OK, back to reality.

Willie on Luca Sbisa – I thought he was good tonight, I think he’s a good player and was happy to see him score. #Canucks

That’s Luca Sbisa, number 5, waving at the puck as Washington’s Andre Burakovsky settles it down and sets it up for Marcus Johansson’s goal. Sbisa might as well not be there.

In the second period, Sbisa scored a goal off a quick shot, and after the period Sportsnet interviewed him. You can see what he said in my tweet.

Sbisa: “I told myself before the game to have a ‘shoot’ mentality.” Any chance next game he can tell himself to have a “D” mentality??

So is Sbisa finally (and magically) starting to play better?

There’s no video of it, but at about the seven minute mark of the third, Sbisa got caught deep in the Capitals’s end because he made a horrible, risky pinch. It would’ve surely been a goal for Washington had Weber not bailed him out with a great defensive play in his own end.

As for Desjardins’s take on Sbisa playing well – it’s lies, all lies. He’s protecting his player, hoping he’ll get better, going to bat for the team he coaches. You can be sure no one on the Canucks thinks Sbisa’s been playing well, so they’ll notice Desjardins protecting him in the public. They’ll play harder for him for doing that.

Actions speak louder than words. You can tell Desjardins is losing faith in Sbisa’s defensive abilities by looking at his ice time. He and Yannik Weber were around 15 minutes, while Alex Edler was up at 24 minutes.

Last game? Both Sbisa and Weber were around 16 minutes against the Avalanche.

Trying to figure out how Willie Desjardins splits his forwards’ shifts is a bit of a puzzle. Against Washington, the Sedins played 20+ minutes, the second liners 15-17 minutes, and the third/fourth liners 10-13 minutes.

It’s a big difference from when they played St. Louis last week – the Sedins were around 14 minutes and all forwards were between 12-17 minutes.

Looks like Desjardins will put a large focus on evening up the ice times when the team has back-to-back games.

While everyone at Sportsnet was talking about how amazing the goal was, I couldn’t help but notice he was quite lucky it went in. Hank actually shot the puck at Washington’s goalie, and it bounced off his glove into the net.

I know he’s a great playmaker, but I’m quite sure Henrik wasn’t going for the bank shot this time…

To all of you that drafted me on their fantasy hockey teams, rest assured,I’ve been working on some new techniques… pic.twitter.com/ZSfqosx6Q2

Or even the way Eddie Lack has done…

Thanks for the book @KevinisInGoal . I might learn to stop a thing or two this year;) @TheGoalieGuild pic.twitter.com/77Bt360GOe

But Miller might become a fan favourite just because he’s a standup guy. With this being the NHL’s Hockey Fights Cancer month, we’ve been finding out about The Steadfast Foundation – a charity Miller set up that provides support for cancer patients.

“The goal of the Steadfast Foundation is to provide patients and their families with support to improve their circumstances and attitude, giving them the best environment and a better ability to battle their disease.” 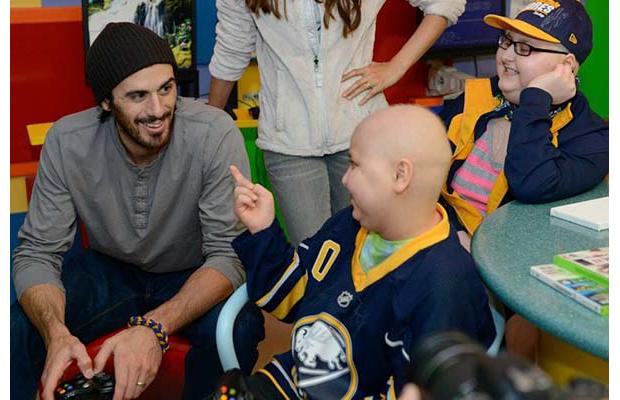 I have a feeling Miller might grow on this town as Vancouverites get to know him.

OK time to see who won the Tweet of the Game (and a gift card to The Charles Bar). First the runner up:

RT if you think the Cameron Family should turn around and punch Mark Messier right in his Suckhole. #VCBCanucks

Mike Stefanuk keeps the streak alive, appearing in every single SixPack so far this season.

But here’s the winner:

I really hope Carlo’s tweet was oozing with sarcasm and not just a simple question. If it was just a question… Yes Carlo, he did. Either way, you won.

Note: thanks to @myregularface for providing .gifs of the goals.