I have a bet with a friend of mine this year for who will be the worst team in the NHL this season. I chose Buffalo, he chose Carolina. I’m not feeling comfortable with that bet right now, but I’m always happy with a Canucks victory.

Filling Omar’s shoes for the post-game SixPack is not easy. Luckily I have the support of so many adoring fans…

If you read Vancity Buzz’s coverage of the Canucks last season, I’m sure you’re well aware of the term “tank nation” by now. It’s a term coined to refer to hoping for your team fails in the hopes of improving your draft choice for the long term success of the franchise. Many Canucks fans supported “tank nation” last year, but that was only once logical hope dwindled in the last third of the season.

Just seven games in, Hurricanes fans are probably already hoping for a tank job in the hopes of landing superstar junior Connor McDavid in the draft. The Hurricanes (0-5-2) are the only team in the NHL without a victory this season and they looked full marks for it tonight. You would think that a team without a victory on three days rest that had just been spanked by a combined score of 11-3 in Alberta would come into Rogers Arena with fire in their bellies. They didn’t. They were soft and they looked like the worst team in the league.

They didn’t even react getting run into the boards by Daniel Sedin.

@RobTheHockeyGuy he said sorry. Not for the hit,but rather for the fact that Gleason plays for Carolina

The Canucks for their part did just what they needed to do and cruised to victory.

I really love the new wrinkle the Canucks have shown on the power play in recent games.

It gets the opposing goalie looking over his shoulder, all four penalty killers looking the wrong way, while neither defenceman wants to chase into the corner.

It was a real strange game for Dan Hamhuis and Kevin Bieksa. The Hurricanes controlled most of the play when they were on the ice, as evidence by their team-worst Corsi rating tonight. Hamhuis hasn’t been the same since being forced to put on a full visor after taking a stick in the face a week and a half ago in Edmonton. Kevin Bieksa hasn’t looked right all season, and you wonder if he is still playing hurt as well.

I predicted the most sparse crowd for a regular season game in Vancouver in over ten years for tonight’s game. So how many people turned out for the worst team in the NHL on a rainy Tuesday night?

18,234 announced attendance at #Canucks game. 400 shy of sellout. I'd guess building will be full for Habs on Thursday

That’s not bad. I was at the game tonight and it looked pretty full to me as well: 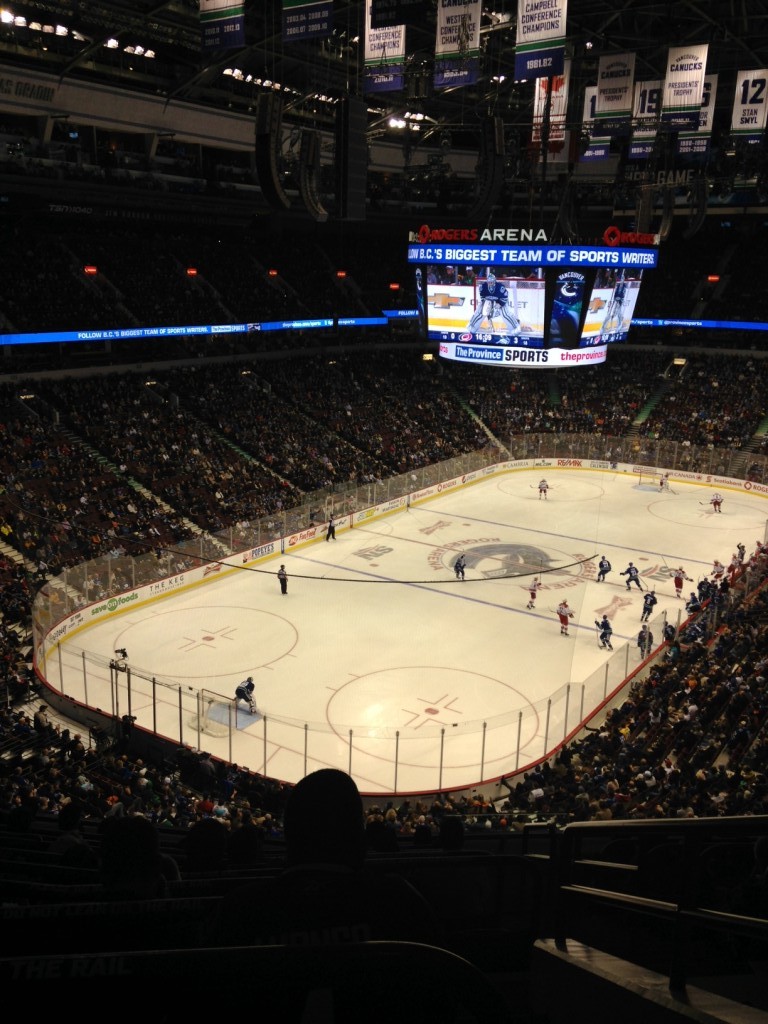 That didn’t mean the crowd was rowdy or anything though. Not that I blame them.

Although they did get a pretty decent wave going in the third period. But even that was met with some resistance…

@RobTheHockeyGuy I blame that Canes goal on the Wave at Rogers Arena.. #VCBCanucks

Ryan Miller didn’t have to make any 5 alarm saves tonight, but he looked in control all night. Against Carolina, that’s not saying much. Still, it should still feel good for Miller, who got his 300th career victory tonight.

Man, how good would it've been if Miller got the shutout in his 300th win. Oh well – he still had to earn it. #Canucks

It would have been nice for Miller to put an exclamation point on tonight’s game and he probably would have if not for a couple of uncharacteristic giveaways from Daniel and Henrik Sedin on the same third period shift.

Thanks for everyone who submitted an entry tonight using the hashtag #vcbCanucks on Twitter. The winner wins a $10 gift card at the Charles Bar.

But first the runners-up:

Sbisa rolled over a Hurricane like he was flattening some dough, preparing a pizza… Or something. I’m running out of pizza metaphors for Sbisa.

Pretty sure the SN graphics dept has been in to the bourbon a bit early. @VanCanucks @omarcanuck #VCBCanucks pic.twitter.com/QpycoO6PHe

I’m a sucker for a good Sportsnet dig.

Congratulations Aaron! Contact @omarcanuck for details on how to collect your prize.