Sunday was a night of celebration as Daniel Sedin made it to his 1000th game in the National Hockey League.

The Vancouver Canucks put on quite the show against the Chicago Blackhawks. Led by Danish superstar Jannik Hansen’s first hat-trick of his NHL career, the Canucks proved that their new up-tempo style is a good match against their old rivals from the Central Division. To celebrate Daniel Sedin’s achievement and a Canucks victory, why not grab a #Sixpack?

Daniel Sedin was honoured on Sunday for appearing in his 1000th game. What makes this milestone all the more incredible is that every game was played with the same franchise. In today’s NHL, that is quite the rare and notable accomplishment. Although we did have the same Avicii themed celebration a few months ago for Henrik.

It was the usual affair for any celebration. Video montage, followed by family and presents. As per NHL tradition, Daniel received the silver stick to along with a painting of himself that I have a hard time seeing him actually hanging up as he is a pretty modest guy. Daniel probably thinks an ego is a brand of toaster waffle.

Interesting tidbit, Henrik Sedin posed for that painting of Daniel.

However, the best part of the celebration had to have been the creative revenge beatings on Duncan Keith being suggested on twitter:

Need Kassian to run onto the Hawks bench with the steel chair and nail Keith after this tribute.

The Blackhawks deserve some credit though:

Good on the Blackhawks. Standing at bench with stick tap for #Canucks Daniel on 1000 #NHL games #rivals #respect

2. Luca Sbisa Has Another Moment

Luca Sbisa has been one heck of a whipping boy this season. But man, does he show some flashes of awesome. And by awesome, I mean plastering Patrick Kane into the boards.

Chicago’s Kris Versteeg promptly jumped in to defend his little buddy but ended up taking a penalty for his efforts. Although the powerplay failed to do anything, Jannik Hansen buried his sixth of the season shortly after to give Vancouver the 1-0 lead.

Some, mainly Versteeg, questioned why Sbisa’s hit wasn’t a penalty. Mark Lazarus of the Chicago Sun-Times sums it up pretty well:

Just because someone hits Patrick Kane doesn't mean it's illegal. It's actually quite impressive. Kane's tremendous at avoiding contact.

The Big Wigs over at Hockey Canada have been collectively holding their breaths over the past few weeks seeing how their roster for the World Junior Championships will shape up. Already down Connor McDavid to a hand injury, it’s no secret that the hope was for Bo Horvat to either be back in London or at the very least be loaned for the Tournament.

This may be stating the obvious, but for a rookie to stay in the lineup, he has to fill a certain role and for his first few games, it looked like Horvat may not be able to do it.

But now skating on a line with Dorsett and Hansen, the trio has given Vancouver a dynamite look for it’s fourth line. And when have the Canucks EVER been able to say that? My apologies to Victor Oreskovich.

If he isn’t helping create scoring chances (three assists tonight), Horvat is dominating the faceoff circle. For a 19-year-old, that is impressive. And now, his face-offs are leading to scoring chances:

Bo Meter: Horvat has won six of seven faceoffs and one so clean that Hansen got away a howitzer. #Canucks

#Canucks rookie Bo Horvat 10-3 on faceoffs, two assists, plus-one and 11:06 TOI w half a period to go. Me thinks London can wait.

Because Bo Horvat is helping to make the fourth line better, he is staying in Vancouver. It’s as simple as that. Sorry, Team Canada.

The 4th line has been the best line, the 2nd line Really misses Burrows and I think we will need a PP goal tonight to win #vcbcanucks

4. Corey Crawford Made Some Pretty Saves

Corey Crawford is often ripped apart for his play, despite the fact he has a Stanley Cup to his name. But my Linden did he ever have some nice saves tonight. Logical reasoning would say Crawford should have struggled as he had to play the night before. But then again, it was against the Edmonton Oilers which probably doesn’t count.

I’ll let the @myregularface gifs speak for themselves:

What a night for Jannik Hansen.

Frequently the topic of debate this season, Hansen drew the venom of many fans (myself included) for his promotion to the top line after Radim Vrbata went down earlier this month. Although the reasoning behind the criticism was that he is better suited for a bottom-six position. But let’s not get into that tonight.

Since dropping back down to the fourth line Hansen, Dorsett and Bo Horvat have been on fire. Against the top teams in the Western Conference, the Canucks will need a lot of depth to compete and their bottom-six is providing that right now. Hansen is now up to eight goals on the season and it’s only November.

Final tweet of the #Sixpack. Hansen Hat-Trick. No need to panic the Canucks have Jannik! #vcbcanucks

I think the only thing that can top a Canucks victory over the Chicago Blackhawks is one of my favourite wrestlers from the 90’s coming back to the WWE, but what are the chances of…OH MY GOD THAT HAPPENED TOO! 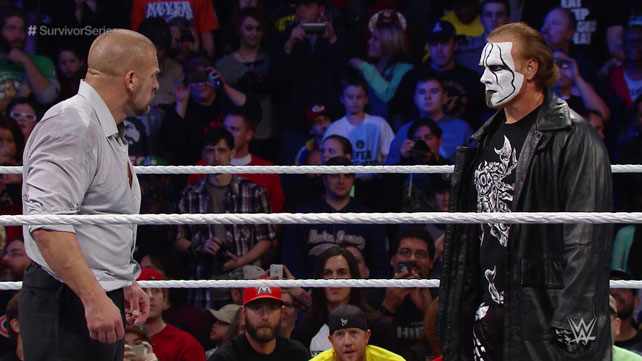 I need to lay down. Goodnight, Everybody.