With the Canucks on the second game of their big road trip, the questions were flying heading into today’s game. Will Ryan Miller continue to get shutouts? Will Jannik Hansen score SIX goals this game?? Will anyone in BC even be awake to watch this game???

Luckily Detroit let Canucks fans sleep in a bit (more on that in a minute) and we ended up with a pretty solid game on our hands.

1. The night the lights went out in Detroit 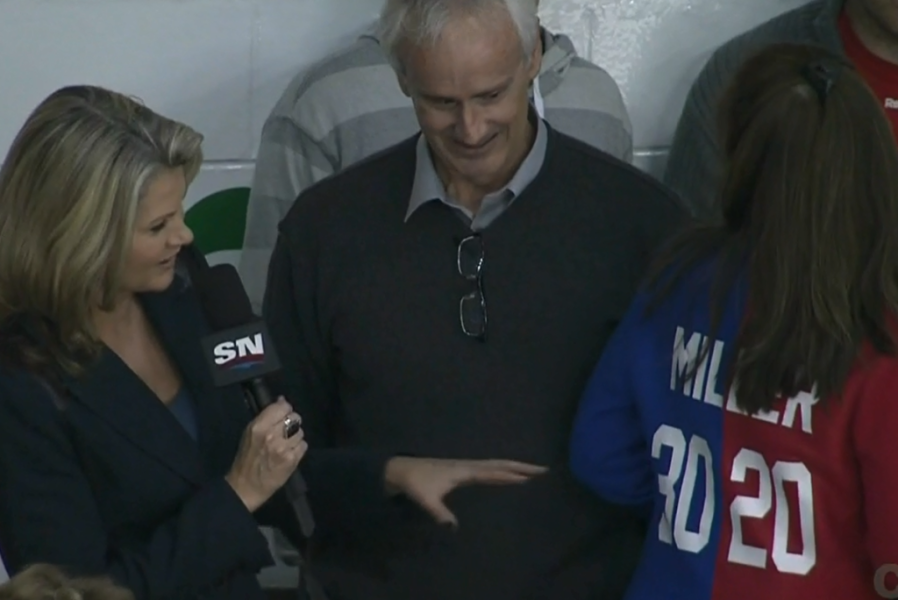 The game was just barely entering its awkward teenage years when the power went out, causing a lengthy delay on the game. What do you do when there is an unscheduled delay on TV? Scramble to fill air time!

As a result, we got an interview with Ryan Miller’s parents, who were there to watch the game between their two sons, Ryan and Drew Miller (Drew plays for Detroit of course).

It was during this interview, we found out that either Ryan Miller’s dad has a super dry sense of humor, or he just prefers Ryan over Drew.

After watching Papa Miller react to the third Detroit goal, I think it’s safe to say that he only owns a Ryan Miller jersey. 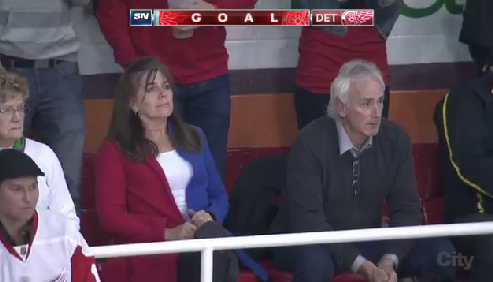 How about Papa Miller after Ryan Miller stoned brother Drew on a breakaway? 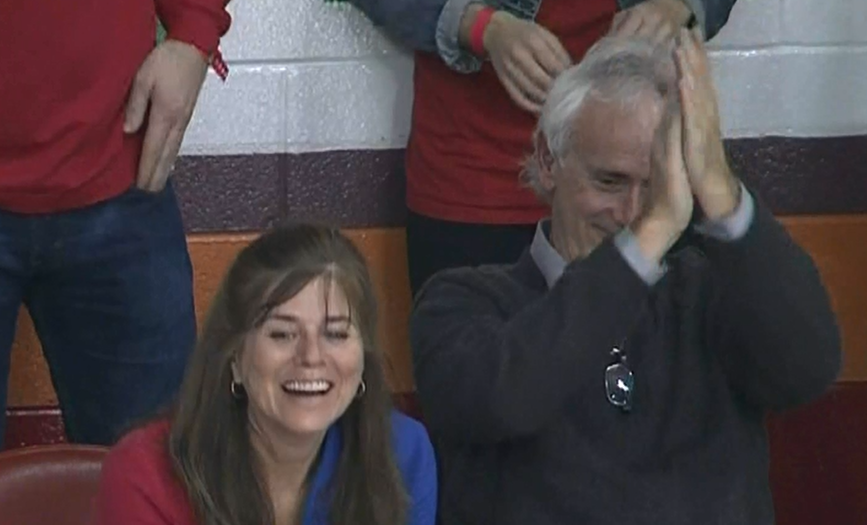 It’s ok Drew, you can spend Christmas at my house this year.

As for the Canucks, what did they do during the power outage? Some had a rest (and don’t think we don’t see that Tim Horton’s coffee on the table right beside you Dorsett…)

While others took out their anger on Gatorade bottles by throwing medicine balls at them (at least that’s what I assume is going on here).

Some #Canucks are in the room, others are keeping warm. Bieksa is tossing a medicine ball against the wall. pic.twitter.com/aRBOVPLUlM

Also, a good DJ knows when to step up.

DJ is five song deeps with tracks that have power outage/light references.

2. Luca Sbisa has two modes: Destroy or Be Destroyed

Luca Sbisa was a first round draft pick who has also been involved in some pretty big name trades in his career (Chris Pronger, Ryan Kesler, Simon Heffelfinger grade 5 dodge ball team). This means he is usually playing under some pretty big expectations, to try and live up to his draft spot and the people he’s replaced via trade.

When he arrived in Vancouver, he started off shaky. Sure, he was landing huge hits not seen since the days of Raffi “I’LL KILL YOU, I SWEAR TO GOD I’LL KILL YOU” Torres, but he was also getting caught out of position several times a game, leaving his team to defend wave after wave of odd man rushes in his wake.

Lately, however, Luca The Legend Killer has shown up and given flashes of what people saw in him when he was drafted. Bieksa and Sbisa were playing some of their best hockey of the season when they got paired up after the Hamhuis injury. The high point of Sbisa’s season was probably when he crushed Patrick Kane in one game, then absolutely tanked Jaromir Jagr in the game against New Jersey.

Tonight, however, Luca had one of his off games. Not only did Bieksa and Sbisa struggle on the ice together against Detroit (for the Corsi fans out there, Bieksa and Sbisa were -11 and -13 tonight, vs +14 and +11 in Chicago and +16 and +13 against New Jersey), but Sbisa also fired a puck into his own net.

You can view that simply as bad luck on a guy trying to make a play (which I do) or you can use it to showcase how much you dislike Sbisa and question his hockey IQ (which some choose to do).

The fact remains that Sbisa is still a very inconsistent player in his career, which will make his time in the top 4 while Hamhuis is out a very interesting one to watch.

As it stands now, though, Bieksa and Sbisa either shut you up and shut you down, or they drop into a ball in the fetal position and cry until the game is over.

Hansen needs to start getting these superstar calls

These refs need to be demoted. This is embarrassingly bad – worse than the nba

I’m sure the harsh winds of Detroit made Hansen bleed.

Admit it, we’ve all been there. it’s been a slow day at work, you have a few things you could do, but why not just sit back and browse Pinterest for some good banana bread recipes instead?

NHL referees are humans, just like us, so it should come as no surprise that sometimes they have off-days too. It’s just their off-days are seen by millions of people.

The refs tonight were all over the map. They weren’t the reason for the Canucks loss (the refs were equally awful at making calls for both sides) but they certainly made the game frustrating to watch. They were either missing calls:

Or they were making up calls:

Seriously, they gave Linden Vey two minutes for interference on that play. Apparently jostling for position is considered high treason to Kowal and Peel, or else they are just mad that Key and Peele have overshadowed their careers as the best dynamic duo on TV.

You know it’s a game where the reffing is questionable when you get each team grandstanding on their benches. 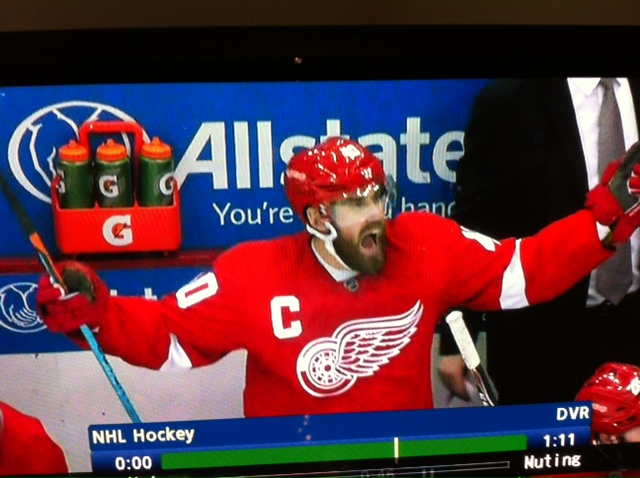 One of the concerns from fans this season was just how good would the Canucks be? Last year was obviously much worse than anybody thought it would be (except Torts, he must have a good idea it was going to go down like that. A season doesn’t get that bad without some planning.) but the big question was just how much better they would be in their bounce back year.

As we know, the Canucks have had what can only be considered an amazing start, as their record has them at the top of, or near the top of, the NHL standings most nights.

Of course, the caveat is that last year the Canucks started off pretty strong as well, before fading away like someone traveled back in time and prevented their parents from marrying. The analytic crowd also has some concerns about the Canucks ability to keep producing wins all season, as they feel they are more a middle of the pack team in the NHL.

Are the Canucks a top team?  Are they simply playing above their head? We shall see. The one thing I like, however, is that even in a game like tonight, where they lost, they didn’t make it easy on Detroit and they very easily could have snagged a point if a bounce or two had gone their way.

This is much better than watching a team give up after going down a goal like last year, or worse, seeing a team implode after being up 3-0 and lose 7-3. 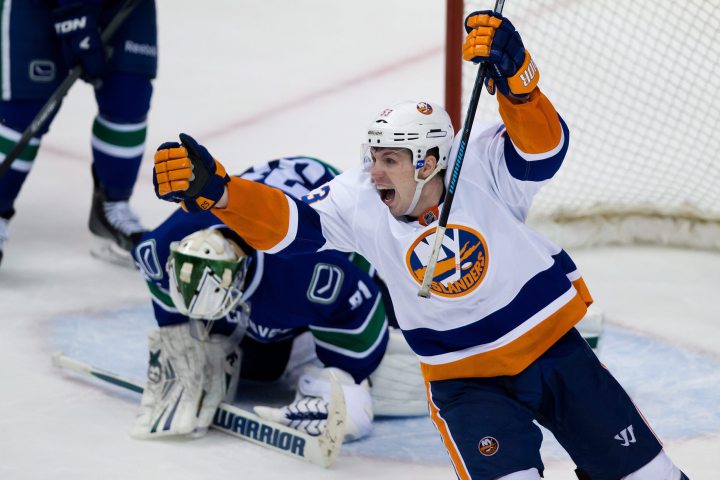 5. Know your role and shut your mouth 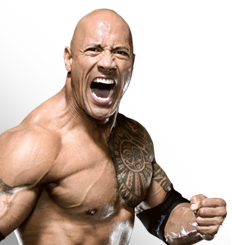 I didn’t mean for that title to come off so aggressive, but when quoting The Rock you must go all out.

It’s always hard to draw conclusions on the first part of the season (what looks awesome now can become “the reason the team sucked giant bags of flaming garbage” at year’s end), but one of the things I’ve liked most about this years Canucks is that everyone on the team seems to know their role. Not only do they know their role, they are being given ample time to prove themselves in their role, as Willie D has done a great job of spreading out the ice time.

As a result, this year Jannik Hansen looks like the Honey Badger, that annoying player who will forecheck you to death, and/or possibly eat your face off.

Shawn Matthias, another player who struggled to start the year, wasn’t automatically thrown into the dog house by the coach. Instead he was given time to find his game, and as a result, he has been one of the bettter Canucks in the last five games.

Linden Vey, another player who has struggled at five-on-five production, is still being given opportunities to succeed, and he was someone who played great tonight as well.

Last year it was the Sedins or bust on most nights (or the occasional night when Kesler felt up for it). This year, players seem to know what is expected of them, and some of them are thriving under that.

Even tonight, down by two goals, with under a minute left, there was Shawn Matthias making a huge power move to the net and almost scoring a goal.

The team looks much more in sync this year, unlike last year where some players didn’t even talk to the coaching staff until halfway through the season.

Gary Galley, one half of the TV commentary team tonight (Dave Randorf was the other) has not made himself many fans in Vancouver. There is a sense he dislikes the Canucks and would prefer they fold the team and move to Phoenix, thus completing the Gary Bettman dream of two franchises slowly dying in the desert (Bettman is into some weird things). There is also the sense that he struggles with facts, as often times he will state things that are simply incorrect.

On the first goal, Galley was all over Edler for his “crappy” clearing attempt. To be fair, it was a pretty shoddy clearing attempt, but Galley’s delivery of the word “crappy” was said dripping with so much contempt it was as if his Dad just went on national TV and declared he preferred his brother over him.

Nothing better than being subjected to Gary Galley early on a Sunday. Shut up already. #Canucks

And here are Montreal fans on Galley:

Gary Galley all over the Habs tonight. He hates the Canadiens, hates em. He says he's still not sure if the Gallagher goal went in. It's 2-2

The transition from TSN to Sportsnet has had its fair share of bumps and bruises, and to be fair, judging a TV crew is very subjective, but I can’t help but miss the presence of Cuthbert and Ferraro on my hockey TV viewing.