Forget the Oscars. Introducing the NHL Academy Awards’ best picture of the year: The Theory of EveryKass.

In this incredible tale, “Kass,” the downtrodden protagonist, faces the most enduring, unyielding conditions, yet he manages to succeed against all the odds.

Kass wins the award for best actor with his wide variety of facial expressions but it was tougher to select best supporting actor. In the end, that honour went to the villain – Evil Willie – who can’t allow Kass to have success in any form.

It’s a harrowing tale of good vs. evil.

Back to The Theory of EveryKass in a moment – we have to talk about Sunday’s Canucks game against the Islanders now. Vancouver won 4-0. OK, back to Kass.

One theory on Kass’s play that’s gaining steam is that the scratching is what’s making him score.

As if Evil Willie’s pressing of the magical “scratch” button has forced Kass to respond.

As if tweets like this are the key to success.

Willie’s gotta make sure to scratch Kassian for the last 2 regular season games so he can score in the first 3 playoff games. #Canucks

Good theory (and by good I mean really bad), because if you look at how Kassian’s played this year, his performance has been directly linked to confidence. Want to know where that confidence got a boost?

February 7 against Pittsburgh – Kass taps in an easy goal in front of the net.

He wasn’t all-world that game. He wasn’t flying around and hitting everything. He was lucky. But it’s amazing how much one lucky goal can affect a player who needs an injection of confidence.

Since that goal, Kass has 9 points in 9 games. He had 5 points in the 4 game stretch that started with the Pens.

Do note, he wasn’t scratched between those games. He was given a vote of confidence, and he continued to produce.

Bad game against Minny? (it certainly was a bad game). Evil Willie should tell him what he did wrong (if he wasn’t so Evil). Tell him he won’t last long in the lineup if he keeps doing that. But at least give him a chance while showing him he means more to your organization than some hack you just pulled off waivers.

Downtrodden Kass managed to get back in the lineup Friday, but it wasn’t because Evil Willie wanted him there. No – it was because Alex Burrows was injured. Kassian also made it onto the top line with the Sedins, but that wasn’t because Evil Willie wanted him there either. It was because the team looked useless in the first period, and Willie was left with no alternative.

What did Kass do? He succeeded against all odds. He scored two goals on Friday and another one Sunday.

Kass looking good with the twins…. So happy for him! #Canucks

The redemption has begun.

Before moving on from Kass’s harrowing tale, there are other theories on his increased presence in recent Canucks games.

Kass played with the Sedins, on the first unit power play, and for a season-high 16 minutes on Sunday.

@botchford This is quite the little Kassian showcase the Canucks are putting on.

@ryanbiech @MitchEmDee on orders from the GM? what gm would such a thing?

Are the Canucks pumping up Kassian’s trade value just to get something for him on the trade market? Could be. Funny thing is Mike Gillis and Alain Vigneault did the same thing with Cody Hodgson to trade for Kassian in the first place.

Benning: I have this great power forward for you. He plays on our power play and everything.

Other GM: Jim, Kassian was scratched 9 games this season.

Benning: He scored 3 goals in his last 2 games. He’s found his game!

3. Guess we should talk about the game a little…

Rob the Hockey Guy/Rob the Dictator might DM me into submission if I don’t get into some stuff about the game in this Six Pack, so here goes nothing.

After Friday’s disappointment against New Jersey, we didn’t know which Canucks team would show up for the Islanders game.

Would it be the team that looked sharp, fast and Stanley Cup bound against the Rangers, or the one that could hardly complete a pass a night later?

Same stuff different pile with goaltending – which would it be? Miller the unbeatable, or Miller the invisible?

Ryan Miller was playing so well in the first period, he made a couple of us forget his double softy performance from Thursday.

When Miller’s on his game he looks so calm back there. Good to see him playing that way again today. #Canucks

Gonna need Miller to dominate like a boss to get a win here tonight.. This Isles team is fast and hits everything!! #vcbcanucks

Then this happened one minute into the second.

Miller could hardly put weight on his right leg as he skated off the ice, and Eddie Lack had to take over.

Lack, needing some redemption himself after his own two-softy performance a night after Miller’s, started fast.

In his first minute of play Luca Sbisa gave the puck away on his doorstep twice. Lack stoned Josh Bailey, and made quite a few more highlight saves before the end of the game.

Eddie Lack is doing his impersonation of a brick wall!!!! #Canucks

To better illustrate how good Vancouver’s goalies were against New York, check out the shot chart from war-on-ice.com: 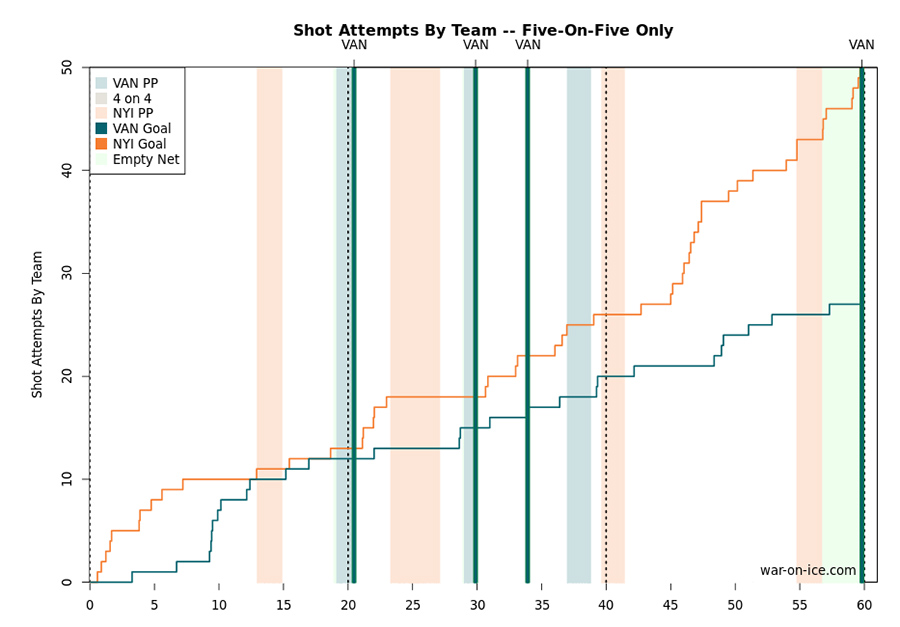 While Miller gets credit for the W because he was on the ice for the Canucks game-winning-goal (the first one), both goalies shared the shutout. You can see from the chart they both deserved it too.

That was easily the most impressive Vancouver’s goaltending has been all season via @war_on_ice pic.twitter.com/8WkeXZ1lT6

6. The Sedin-linemate search is over

For years the Canucks have looked for the perfect line mate for the Sedins. Trent Klatt, Jason King, Alex Burrows, Mikael Samuelsson, Niklas Jensen, Janik Hansen, Radim Vrbata, Zack Kassian – all have had their shot with them. So far, Burr has been the best, but look who was at Sunday’s game.

Yes, they have a brother, and no he’s not their triplet. Peter’s older, and they have another one – Stefan – who also lives back in Sweden.

Can they play hockey? Nope. But who cares. Imagine looking at a scoresheet and seeing “Sedin from Sedin and Sedin”. Just imagine. It would make you smile and laugh for hours, no?

BTW, at least half of the goals scored by either Sedin should actually say “Sedin from Sedin and Sedin” because they pass it back and forth so much. Unfortunately this isn’t the way scorekeeping works, so… does Peter have to clear waivers, or…