The NHL’s trade deadline officially came and went yesterday and when Zack Kassian stayed put, we at the SixPack writers union breathed a sigh of relief.

Not because we’ve long thought he has tons of potential and trading him would be a waste (although we do believe this), but because he’s a blogger’s dream. We need Zack, Vancouver. We need his funny (weird) faces, we need his unpredictable goal celebrations, and we need his Roxy flu stories.

Now for a completely unrelated comment: Kassian missed Tuesday’s game against the Sharks with flu-like symptoms.

Wish that could’ve been the biggest story of the night, but with Jakob Markstrom starting his first game this season, Kass never really had a chance.

To be fair, the Sharks’ first goal was a top-corner laser, and Markstrom had a stick-less Linden Vey providing a screen. The second was a tough goal-mouth scramble where Markstrom lost the puck, and the third, well that was a horrible rebound from him.

The Canucks were down 3-0 seven minutes into the first, and Markstrom allowed 3 goals on 4 shots. The game ended 6-2 Sharks, though the last two San Jose goals were empty netters.

Some were calm and sane about how Markstrom started.

As for Markstrom tough start. 1st could have gone in on anyone, 2nd off glass & into crease, bad rebound on 3rd. #Canucks

Some tried to be positive.

So…um…uh…Jacob Markstrom…3 goals on 4 shots. At least he made a save #Canucks

And sommme were jumping to conclusions.

Jacob Markstrom is like a modern day Martin Brochu #Canucks

There were more of those that I won’t bother including.

Like I said above, Markstrom wasn’t blessed with much luck on those first couple of shots. Still, starting him against the Sharks, when they could’ve/should’ve thrown him in against the Sabres last week…

If the #canucks have any foresight and any sort of plan for their goaltending whatsoever, they shld start Markstrom agnst Buff tomorrow.

But let’s take a step back for a second. Given Markstrom didn’t get the start in Buffalo, and the Canucks had to make a choice on this game, what they did made sense.

(2/2) this is also about needed rest + reset work with Melanson for Lack + learning from last season; now up to Markstrom to earn more games

Woodley’s second tweet is important. Lack was roughed up big time against Boston, and the St. Louis game was similar. Since no one wants Lack and the team to go through what they did last year – Lack started 19 straight games and had to play the last few with an injury – they were being proactive and letting him heal up.

After the Sharks went up 3-0, the Canucks mounted a rousing comeback. Henrik Sedin scored twice to start the second – his 900 and 901 point in the NHL.

Check out Daniel’s pass on the first. He could’ve shot it into the goalie’s pads like any normal human would, but no, he sees Henrik open behind him, allowing his brother to shoot at a wide-open net.

And Henrik’s second was all Sedin magic.

Time for the token Mike tweet in the SixPack.

Harrison made a good joke.

@VanCanucks Well-deserved. They were cut into slices and served with peanut butter, correct? Also they got assists, yeah?

3. Blake’s got the scoop

Earlier, there was a lot of speculation about who’d be starting in net for the Canucks. Blake Price tweeted this.

We can hear Melanson saying something to the effect of “You’re going to face shots like that tonight Markie”.. So, sounds like Markstrom..

How’d he get that audio? Our crack team of researchers captured this shot of Blake at the rink today. 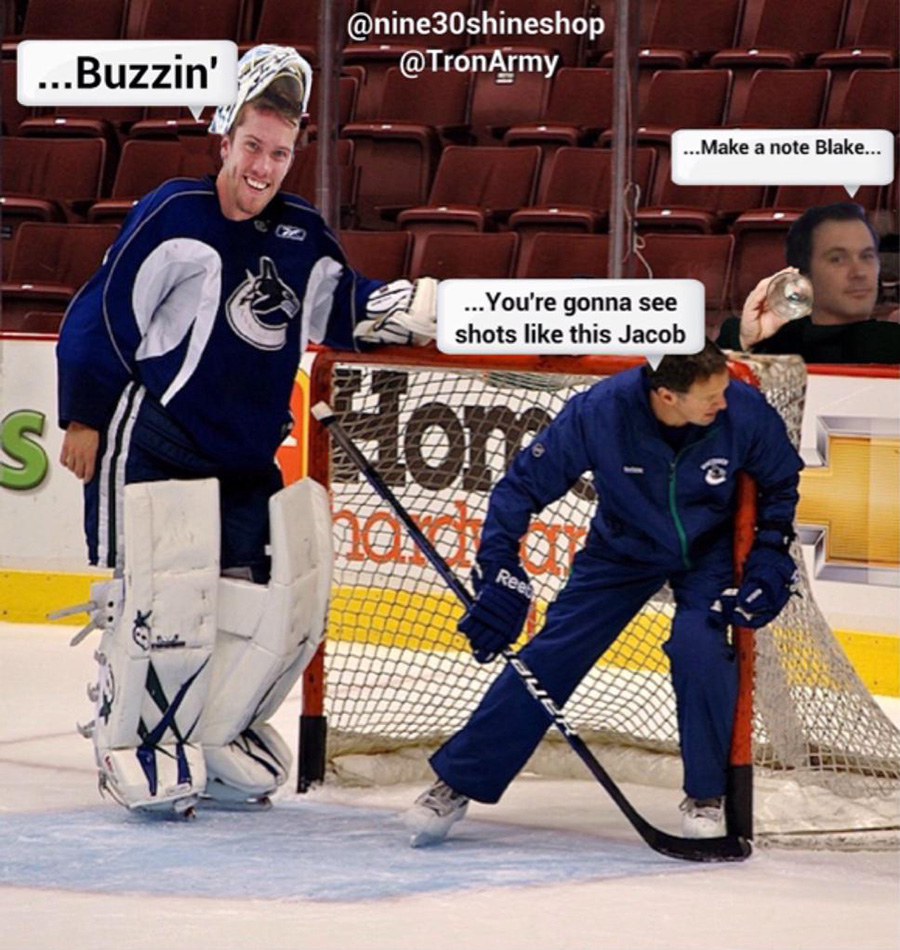 (Huge props to Cory – @nine30shineshop – for putting this together for us.)

Theory: Rollie mistimed his comment, saying it right after Hank took one of his weak slappers from the point.

4. Calgary’s thoughts on the Baertschi trade

We know Jim Benning thinks Sven Baertschi will be a top-six forward. He said so soon after making the trade Monday.

We also know Brian Burke and the Calgary Flames weren’t sold on him.

Rob Kerr and Pat Steinberg, the hosts of “The Big Show” on Sportsnet’s Fan 960 – Calgary’s sports radio station, weren’t happy about losing out on Baertschi. Here are some of their comments after the trade happened yesterday.

“I would’ve liked to see (Baertschi) spend more time in the organization, because personally, I liked the direction Baertschi was going. I liked the way he was trending as an NHLer.

It wasn’t happening at the same rate as Sean Mohahan. Monahan was ready to be an NHLer before Baertschi was, but I still liked the way Baertschi was going.”

Both agreed it was the best deal given Baertschi wasn’t going to re-sign with the Flames in the offseason (set to be an RFA).

As many have been saying, it sounds like the Canucks may have found a gem here.

TSN’s Bar Down originally tweeted a link to this video earlier today. Former Canucks coach Marc Crawford loses it on the opposing coach in the Swiss league.

It’s good. Like Crawford should audition for a part in The Mighty Ducks 4 good.

To celebrate the month of February, we did what we do at the end of every month. We threw the names of everyone who has had a tweet included in the SixPack in the past month into a hat for a draw.

The winner of the draw gets a $100 gift card to The Charles Bar or any BluePrint location.

And the winner for February is…

Congrats, Chris. Our advice for you: pace yourself on that $100 worth of beer.

Advice for the rest of you: keep tweeting at us, using #VCBCanucks and entering the draw for next month.