The Canucks had a lot going for them going into Wednesday’s game against the Stars.

First, they were motivated – coming off a four-game losing streak, capped off by an 5-1 embarrassment to the Rangers.

Second, Dallas came into the game allowing the most goals in the league – 3.52 per game, worse than even Edmonton’s 3.28.

Third, Dallas scores less – they’re 9th in the NHL while the Canucks are 8th.

Fourth, these were the Western Conference standings before the game. 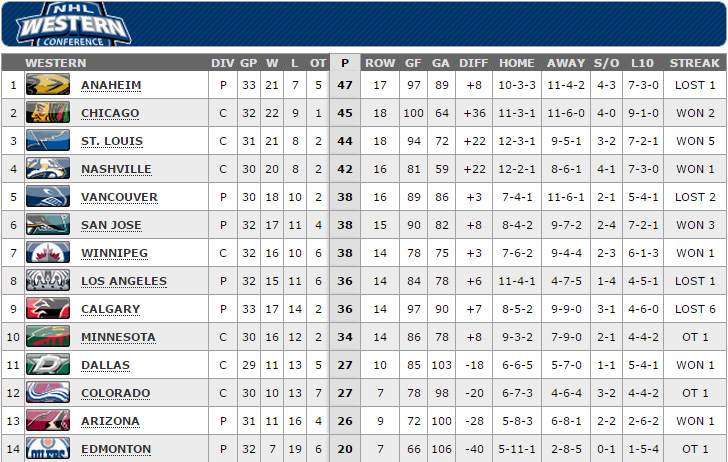 There’s more too, but none of it mattered. Eddie Lack got the start and he allowed only one goal, but as any lonely person will tell you – life’s rough when you’re not scoring.

The #Canucks deserved the win, but sometimes games like this happen during the long season.

Yep, it was one of those nights. The Canucks lost 2-0, extending their losing streak to five straight, making those lonely fans even sadder.

Before jumping to conclusions based on the score, realize the Canucks were much better than they were against New York and at the end of the road trip. Here’s the shots attempted (5 on 5) chart from war-on-ice.com. 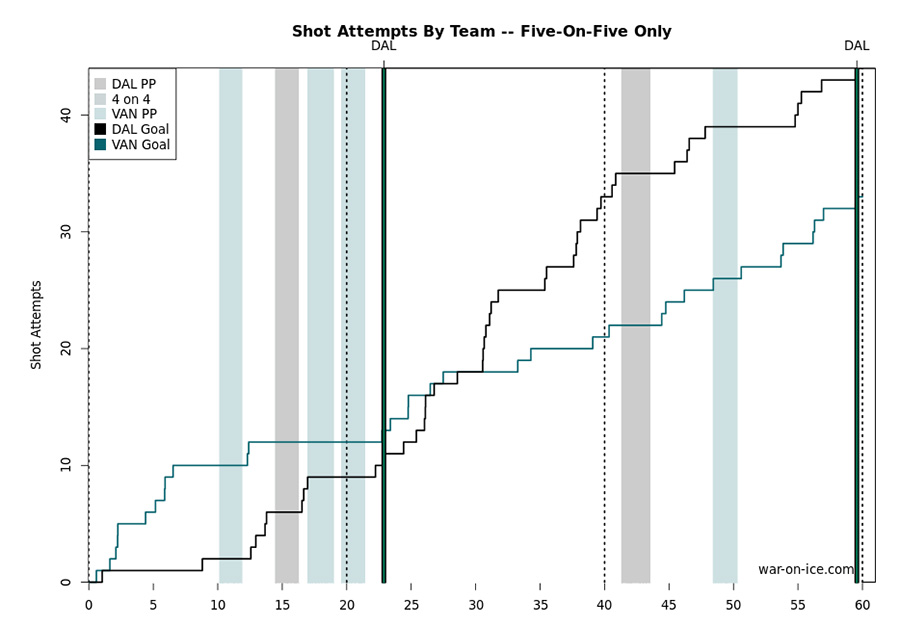 You can see the Canucks dominated the first period and really held the balance of play up until Dallas scored in the second.

Mike summed up the moment nicely.

Tough, tough goal to give up after dominating Chances for the 1st 23 minutes,, #vcbcanucks

“We had a good first period – we had two or three real good chances. (Lehtonen) made some great saves. Our third period was good. We created stuff on the last power play, but outside of that our second period wasn’t a good period for us and it probably cost us the game.”

After Tuesday’s practice, Desjardins was asked if the team needed to change its system.

“I think we have to make some adjustments with the system. Coming off the road, we were talking about having to make adjustments at certain times. Most of those adjustments were when we weren’t fresh. Today I think we were fresher and they did catch us a bit by surprise with their speed.”

Adjust they did. For most of the season, Canucks defensemen have had a green light to pinch whenever they want, but against Dallas it looked like one Canucks d-man was tied to the offensive blueline while the other had more freedom to roam. Even the roamer was playing much safer and smarter, not going too far into the offensive zone.

Another positive for Vancouver coming into the game – Dallas’ penalty kill was ranked 23 in the NHL, killing off 78.4 percent of power plays against.

Given their first crack at that crappy PK, the Canucks blew it.

I thought Wilie said they were gonna work on that power play… #Canucks pic.twitter.com/WfE0TV1N05

It got better, though. On Friday, Canucks GM Jim Benning said on TSN 1040 that the team needs a better net-front presence on the power play to help it score.

With Alex Burrows added to the first unit, that role was given to him for the night. He did well with it too, especially on their man advantage halfway through the third when Vancouver generated at least 6 high quality chances and nearly tied the game.

With Ryan Miller having allowed 12 goals in his last three starts, the Canucks finally went off script, starting Lack against the Stars.

The backup played a hell of a game, facing 28 shots, allowing one goal and putting up a .943 save percentage.

But that goal – it was his fault. You can see how in the overhead view here.

At the other end stood Kari Lehtonen, the man ranked 39th in the NHL with a save percentage of .902 prior to Wednesday night.

His save percentage on Wednesday? 1.000.

5. Sbisa does his thing

Midway through the second period, Luca Sbisa had one of his magical shifts. The magic being how he can transform an easy chance to clear the puck into a disaster in his own end.

Sbisa just attempted the pass it behind myself bank shot off the boards give & go to myself. Not surprisingly it resulted in a turnover…

That’s exactly what happened, right after Sbisa took a look up ice, aimed and fired, but forgot the puck behind him.

Bo Horvat had his worst night in a while in the faceoff circle, going 5 and 8. Still, he leads all Canucks centres with a 56 percent success rate – a large margin over Henrik Sedin’s 50.6 percent rating.

Wonder why he’s so good in the circle?

“(Horvat) actually watches video of every centreman prior to each game and he focused on Spezza… He said (Spezza’s) one of the toughest centremen in the league because he’s got so many options – he can sweep to beat you, use his feet to kick your stick; he sometimes goes over the top to tie up your stick – but (Horvat) said he really tried to focus on Spezza today.”

As any smart teenager (Horvat’s only 19) will tell you – doing your homework pays off. Maybe he can spread that message to his teammates.

Note: thanks to @myregularface for providing the .gif of the goal