Flames’ coach Bob Hartley, who evidently graduated from the same coaching school as John Tortorella, had plenty to say before Game 2.

Flames coach says series with Canucks is war. “I don’t expect to spend time with any of the Canuck players at the Stampede this summer.”

Hartley couldn’t have been more off base considering games of Monopoly at the Hartley household almost certainly end in fist fights.

Vancouver played a dominant game, owning the Flames for most of it and winning 4-1, and the Flames responded like you’d expect any Brian Burke/Hartley team to – by taking 77 penalty minutes with less than two minutes left in the game.

But hey, that’s hockey. That’s why fans love this game and you can bet if Vancouver was down 4-1 at the end, Canucks fans would want to see their team send a message.

Eddie Lack had the Rogers Arena crowd in the palm of his hands from before the puck dropped. The “Eddie Eddie” chants began when the players stepped on the ice, and they kept coming throughout the night.

Halfway through the second period, Brandon Bollig crashed the Canucks net, landing on Lack. This is what it looked like, and yes, that’s Lack under #25. 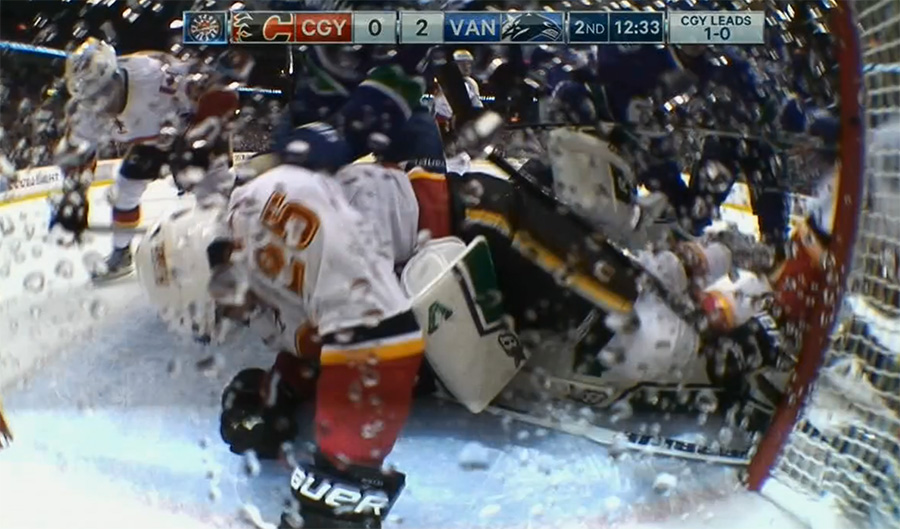 Not that he was ever invited, but Bollig overstayed his welcome lying on top of the goalie.

Don’t mess with Eddie Lack in his crease! #Canucks pic.twitter.com/QbfOuL8Pr5

Although fans on Twitter couldn’t join the Eddie chants, they didn’t want to be left out.

Lack is NOT Swedish for punching bag. Not anywhere, even Alberta! #Canucks #Flames #flamesvscanucks

Someone has to pass that message on to Burke.

After the Eddie’s blocker attack:

Lack utilizing the rarely-used #buttpunch in that scrum.

Before going into MMA mode in the third, the Flames did try to get back into the game. Unfortunately for them, Lack was dialed. Twitter fell more in love.

Oh @eddielack I’m preparing to have your babies. #Canucks #StanleyCupPlayoffs

Really, Lack deserved a shutout for his performance. Didn’t get it, but he was the Canucks best player.

Most playoff teams in history have only gone as far as their goalie will take them. Lack’s bounce-back from Wednesday’s series opener shows this run might not be as short as Vancouver’s last two.

2. Winning back the fans

After Game 1, media members asked Vancouver players about their seven game home playoff losing streak. Tony Gallagher said if ownership is wondering why seats at the Arena aren’t selling, maybe he should look at that to start.

Really, do fans consider home vs. away records when buying tickets or do they simply wonder if the team has a chance to win?

To me, it’s the latter. The reason Canucks fans have had little faith and Linden and his team have had trouble selling tickets all year is the team has won one playoff game since 2012.

Again, in three years (two of which featured the Canucks in the post season), the team won one playoff game. Fans got their hopes up, they wanted another long playoff run, and they were crushed. Twice.

It takes a lot to recover from that. It takes time, and it takes hope.

The time has passed. And the hope was finally reborn Friday night against the Flames.

Trouble selling tickets? That’s a thing of the past.

Yep, that’s the Flames media calling the Canucks old men. And this is how the old men responded.

The Sedins weren’t going to be held off the scoresheet on Friday. Playing with so much urgency, they scored on their second shift of the game, just three minutes in.

Back to that Hartley quote –

Vancouver scored on its first power play of the game. Even better, it was yet another “old man,” Chris Higgins, and his second power play unit that put in the goal.

It really makes you hope Hartley and the Calgary media keep chirping and providing the Canucks with bulletin board material.

By the end of the night, Bo Horvat played only 12 minutes, had two shot attempts, and was the worst Canucks skater in terms of advanced stats.

This probably shows how good the Canucks played, as Horvat played a solid game.

During the first period, Horvat had one end-to-end rush that reminded Canucks fans of Pavel Bure flying up the ice – no exaggeration.

He also set up Ronalds Kenins for his first career playoff goal, and put the Canucks up 3-0 in the third.

Hell of a way to follow up his first playoff game, in which he scored his own first goal.

6. What Flames fans are saying

Found this on FlamesNation.ca from before Game 1:

Vancouver just used to be so much easier to hate. Sure, these days all their players are delusional asshats who still believe the league is biased against them, and Alex Burrows is definitely trying to chew off my kneecaps as I write this, but it’s not the same. The Canucks just aren’t all that interesting anymore. They’ve gotten too old, and the dirty hits and the dives are becoming too predictable, and their fans haven’t destroyed their city in 4 years…

They’re more laughable than anything right now. Even the Sedins, with those four cold, dead eyes don’t strike despair into the hearts of the opposition anymore…

Oh well, when opposing fans are leaning on riot jokes, you know things are going well in Canucks land.