A couple of weeks ago Jim Benning said he was “perplexed” at how the Canucks play really well against the good teams and not as well against others.

On our Podcast this week, Tanbir said he thought Vancouver would lose to the Islanders, to which I said, “The Canucks always win the games they’re supposed to lose, so I think they’ll win.”

So if you don’t yet know how Vancouver did against Buffalo, follow the formula.

They lost 6-3, and didn’t grab two points that should’ve been a gimme.

Willie Desjardins after the game:

“For whatever reason, we didn’t seem to be as sharp tonight. We weren’t ready.”

Someone explain why the #Canucks are playing defense like a peewee hockey team tonight, please?

Maybe Mike’s explanation is best, though.

The Canucks had good pressure in Buffalo’s end, but in their own end they played like a bunch of maroons.

What do maroons do? They make blind passes in front of their net like Nick Bonino did. And they can’t make simple clearances up the boards.

Maroons. No other way to describe it.

After Tuesday’s win against Boston, people were giving the Canucks all sorts of credit for their “gritty” “hard-fought” win.

Truth is, they were outplayed handily by the Bruins and Eddie Lack should’ve been named all three stars of the game. He was that good.

Against the Sabres, he couldn’t be faulted on the first four goals. His teammates were on staycation (far as I could see they were all there in Buffalo).

The fifth? His fault. 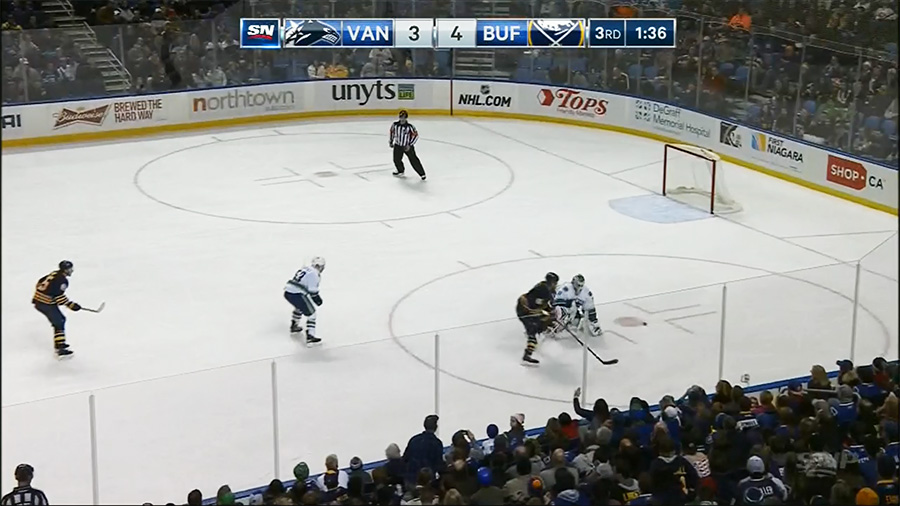 That’s him trying to get to the puck before Chris Stewart. Needless to say he didn’t make it, and he watched from the faceoff dot as Stewart passed to Brian Flynn for a tap-in.

I tweeted this earlier today.

Best thing abt Sedins right now is how they can take extended OT/PP shifts late in gms. All thx to WD’s smartly limiting ice time. #Canucks

Against Buffalo, Kassian’s and the Sedins’ stats were looking pretty crappy through two periods. Then came the third, and once again, the Sedins brought it. Here are the even-strength corsi plus/minus numbers on the game. 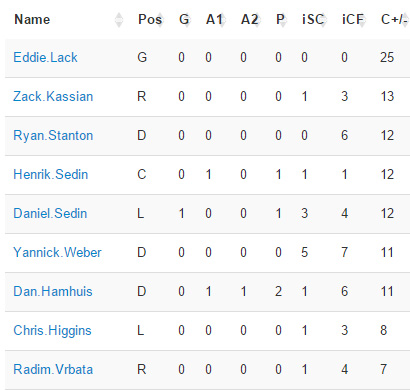 Yes, that’s Kassian leading all Canucks skaters, and yes, he was that good in the third.

Check out the goal they scored.

Ice time distribution amongst forwards Thursday – no forward played 17 minutes, and none was under 13. It’s almost unbelievable.

Not sure this has gotten enough exposure.

We all saw Kassian’s celebration after scoring against Chicago a couple weeks ago. Quick reminder:

What we didn’t know was why he didn’t smile and cheer like most do upon scoring a goal. Most of us dismissed it with a “Kass is just a weird dude,” and we moved on.

Dan Murphy later asked Kassian why he celebrated like that, and he wrote about it here. This was the key line.

“I asked Kassian why he was so angry after the goal against the Blackhawks and he quite honestly replied, ‘Because it was my first shift in like seven minutes.'”

It all makes more sense in that context. Downtrodden Kass sits stewing on the bench, not knowing when his next shift is coming. Finally Evil Willie turns to him and says “you’re up” and Kass scores. Vindication for Downtrodden Kass, and a little “try playing me more” to his coach.

One thing I do know: Canucks fans’ are changing their tune on Kass.

#Canucks DO NOT TRADE KASSIAN !!

Sportsnet displayed this graphic in the second period showing the NHL’s best shooting percentages in the month of February. 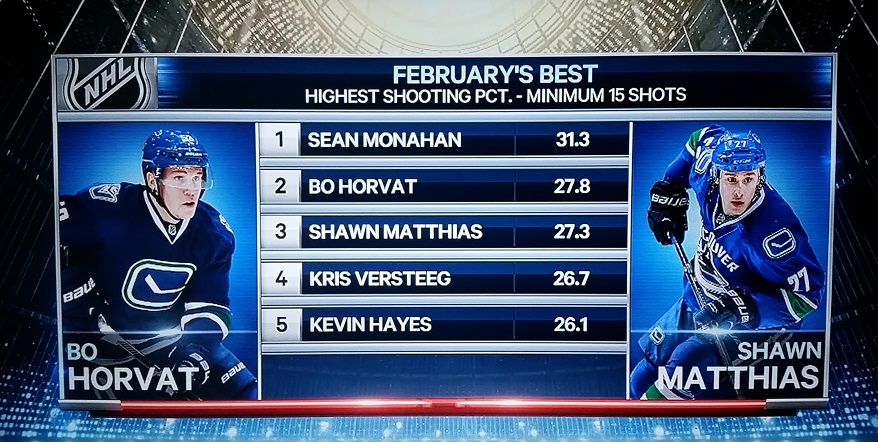 Funny thing is Kassian has scored more than any of these guys – 7 goals – but since he’s done it on so few shots – 14 in February – he didn’t make it on the list.

Cloutier, who develops the team’s goaltending prospects, is very complimentary of Markstrom…

Cloutier said there were three additional areas Markstrom worked on.

First: proper tracking after the initial shot. “As soon as he makes the save, we want his head and eyes down finding the puck. If your head goes, your body follows.” The alternative is trying to position yourself first, but not really knowing where the puck is. “Carey Price is, to me, the gold standard. As soon as he makes the save, he’s tracking down all the time. Stay big and square an extra half-second to find it.”

Trying to turn Markstrom into Carey Price? No one here is arguing.

Second: better reads of a shooter’s release. “Don’t just drop,” Cloutier said. “Don’t make the first move (if you can avoid it) unless you read the release of the shooter.”

Third: Use the stick to knock away the puck when you can. “There are shots where you can’t do that. But, if you can use your stick to put the puck in the corner instead of out front, you can help your defencemen.” Often, the opportunity exists on longer attempts.

So does Cloutier think Markstrom’s ready for the NHL?

“I certainly think he can make the jump,” Cloutier said. “But I haven’t had to deal with him going through hiccups this year. He’s been that good. Every game I’ve seen him, he’s a star.”

That will be the next test for the 25-year-old, how he handles his first adversity.

The Winnipeg Jets tweeted out this video entitled The Rick Rypien Story that they played at the MTS centre today. Some of you may have already seen it as it was released by the NHL February 9, but I missed it.

Nevertheless, it contains messages about Rypien and others’ struggles with depression that should be repeated.

“His work ethic was second to none… He was funny, he was caring.”

Craig Heisinger, director of hockey operations with the Jets when they signed Rypien:

“There was probably a bit more to Rick Rypien emotionally than we were aware of at the time. To this day I leave my phone on 24 hours – that was always because of Rick…”

“It (Rypien’s passing) means we have the opportunity to do what he wanted to do, which was help other people and to make them understand that there was no stigma, this was nothing to be ashamed of, and there’s tons of people who need help with this. You’ve just got to reach out to your friends, to your family and to professionals.”

Note: thanks to Taj for RTing this and bringing it to my attention.