You’d have to be clueless not to know what the biggest story in Thursday’s Canucks game was going to be.

No need to waste any more time – might as well report what Luca Sbisa accomplished against the Ducks: 0 points, 0 assist, 1 shot on goal, and a minus-1 rating.

Funny thing is Ryan Kesler’s stats read 0, 0, minus-1 too (if you care about him). Turned out, the game wasn’t really about Sbisa. Or Kesler.

Canucks fans, if you’re reading the 4-3 score (they lost in a shootout) and worrying about the loss, don’t. Vancouver dominated. Corsi for stats were 62-49 for the Canucks. They may not have got the win but if they play like this every night they’ll win many more than they lose.

1. Since stats are cool now

Here are the game’s shot attempts from war-on-ice.com. 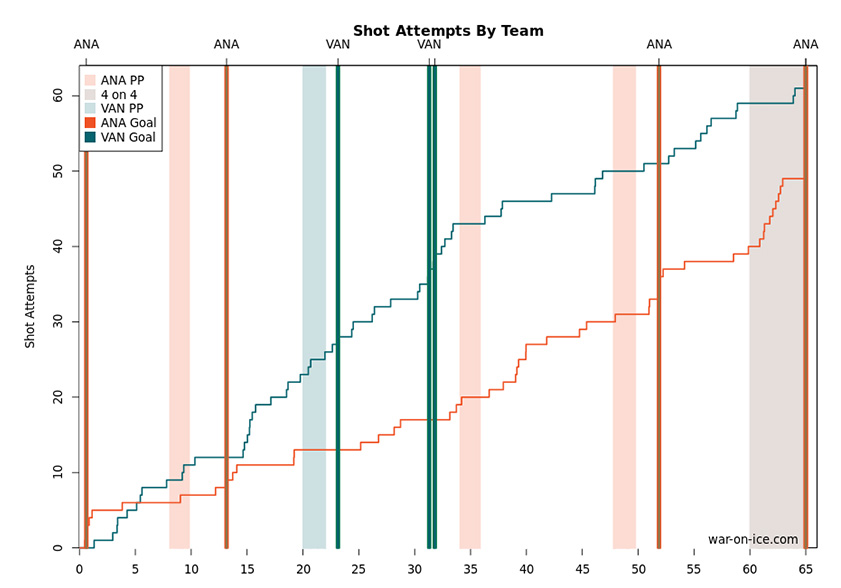 You can see Vancouver dominated from the start of the game, but do notice that the Ducks were slightly better in the third, and much better in overtime. Course, the Canucks were coming off a back-to-back while the Ducks were well-rested.

The Ducks were nearly as dominant in OT as Eddie Lack, who nearly stole another win from Anaheim.

Kesler didn’t do much. His corsi +/- was minus-7 in the game. He didn’t score on his shootout attempt. Maybe all the booing got to him.

I thought the boo’ing by the fans was gonna get kesler all fired up.. Too bad he hasn’t done anything all game #VCBCanucks

Or maybe this was what slowed Kes down.

Unfortunately Kesler got the last laugh as his team won this round.

Eddie Lack played yet another great game against Anaheim, but this time he didn’t get the win. Worse, he had 3 goals scored on him. But if you look at them, you’ll see he had no chance on a single one:

Cogliano’s goal – a cross-ice pass from Jacob Silfverberg to Andrew Cogliano = no chance for Lack:

Beleskey’s goal – Vatanen’s shot, tipped by Getzlaf, sitting on the doorstep for Beleskey:

We agree they weren’t Lack’s fault, then?

Bo Horvat was slated to be a healthy scratch Thursday, but right before the game we found out Alex Burrows wouldn’t play.

Horvat didn’t pass up the opportunity. He scored his first NHL goal in the second period – check out the Henrik-like pass by Derek Dorsett to set him up.

He followed that goal up by playing his first penalty kill shift in the NHL, and playing five big shifts in the third.

By the end of the game, Horvat was taking key offensive draws against Kesler and winning them, and he led the Canucks in faceoff win percentage going 9-5 on the night.

Sportsnet’s graphic for the three stars at the end of the game: 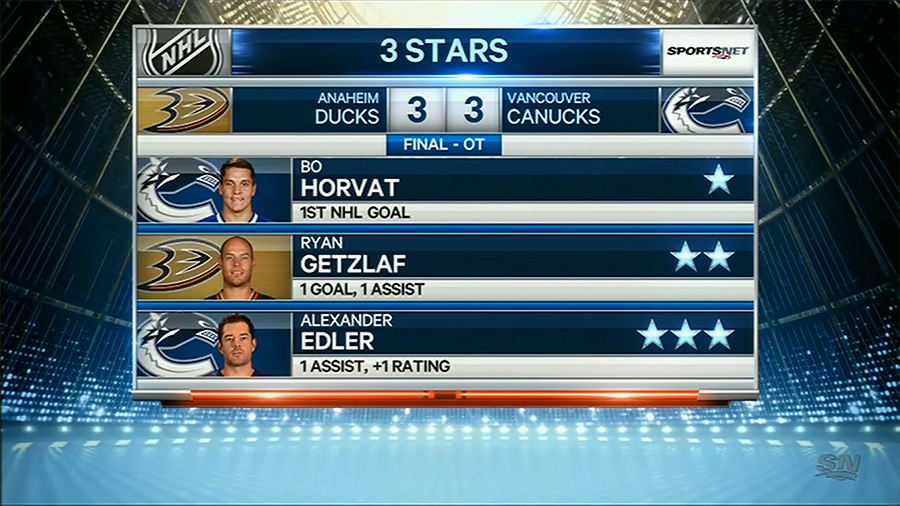 @omarcanuck He got a haircut. Geez, men never notice these things… pic.twitter.com/iibNJyYGo9

Also, Zack Kassian doesn’t take getting stitched up like a man. 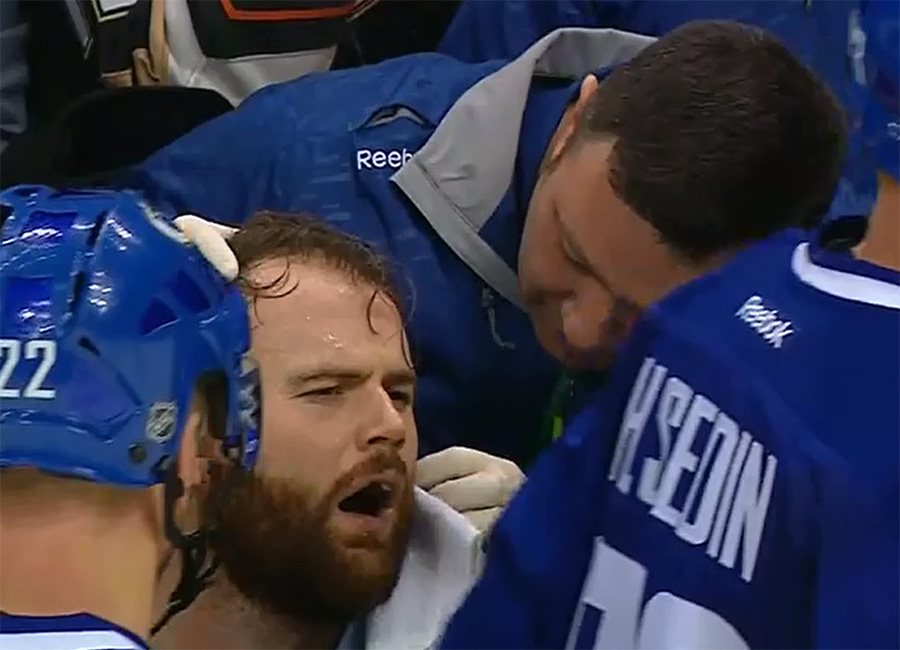 He was hit by a flipped puck in the middle of the third, btw.

I wanted to alert Rob, our editor, about a some suggestions Mike was giving me on boosting the Sixpack. Mike’s reply…

Radim Vrbata lost the puck on his shootout attempt. This was so bad it was good:

Vrbada Get it Man I crack myself up #canucks

Man I crack myself up

Note: thanks to @myregularface for providing the gifs used in this post.