The NHL’s All-Star break is finally over, which produces two nice outcomes for Canucks fans.

1. All the complaining about what’s wrong with the All-Star game is finally over.

Here’s Damien Cox during the game:

All I can say is this is on the players. It’s totally their call to play this way, because it wasn’t always this way.

This is on the players?

No. This is on Damien Cox for taking the All-Star Game (and himself) too seriously. What did he want, the players to put blood and guts into the game to win it all for Team Toews or Team Foligno?

Serious question: why does everyone complain so much? When I was growing up, I never missed an All-Star Game. I loved seeing the personality of the league’s superstars – hearing them mic’d up, seeing their funny reactions to different things. I’m 100% sure that today’s product – with Friday’s draft, the Go-Pro cameras and Brian Elliot and the Ovie being funny – is a lot better.

I’m sure the kids and anyone else who tuned in for some entertainment got what they wanted.

Who didn’t enjoy it? Damien Cox and a bunch of other cantankerous media members.

One last comment – any game that can provide so much material for Wyatt Arndt to make fun of in his hilarious Best and Worst recap is worthwhile in my eyes.

It’s a slow start but if this game is anything like the last hockey game I watched, it should end up around 20-14.

2. NHL hockey is back. No more “Canucks” withdrawal (AKA your excuse to drink beer and eat pizza 3 times a week).

After watching Vancouver lose to Anaheim 3-0, you may not be feeling as good about this. While the Canucks outshot the Ducks 10-9 in the first, they were listless/hopeless/painful to watch through the rest of the game.

Ryan Miller (aka #6Miller) allowed three goals you’d want your starter to save, but considering his team didn’t score, this one wasn’t on him.

Still, this is funny.

Miller can’t catch a break tonight….or a puck. I kid I kid #vcbcanucks

The scoring chances table from war-on-ice.com makes a comprehensive illustration of how the game went for the Canucks. 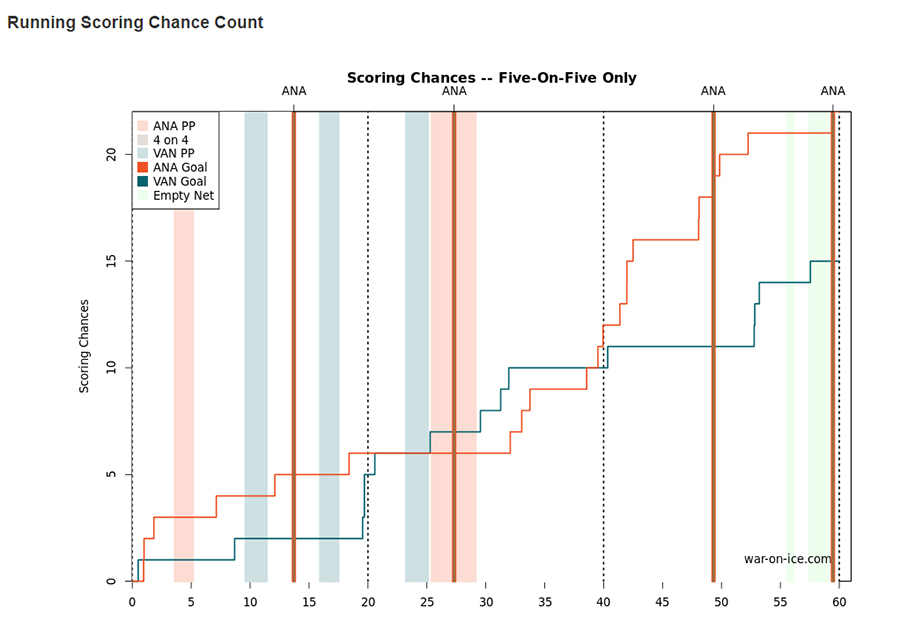 The Ducks were better the entire game, though they had a bit of a lull in the second.

Weird thing about Vancouver’s first 45 games is the team seemed to switch personalities halfway, like Luongo/strombone1 during his time with the Canucks.

Up until their December 4 game against Pittsburgh, the Canucks were seventh in the league in goal scoring, with 51. Their even-strength corsi-for percentage was 50.7 – ranked 15th in the league and over 50, meaning they had possession of the puck (slightly) more than the other team.

After that game against Pittsburgh, the goals dried up. Since then, the Canucks scored 26 goals – good enough for 29th in the NHL over that span. Their even-strength corsi-for percentage fell to 47.4 – 23rd in the league.

The Canucks appeared to turn it around right before the break, going 3-1 in the four games before it.

Unlike last season, where the injuries were as overwhelming as @JovanHeer’s Miller love is now, the Canucks are relatively healthy. Their first half is a good indicator of how they’ll be the rest of the way – average. There’s a decent chance they’ll sneak into the playoffs but who knows from there.

@omarcanuck Kass doing his best to blend in tonight. pic.twitter.com/51VC0Oq21U

Fifteen minutes into the game it looked like blending in would be his theme for the night.

But then he woke up. He and his linemates Shawn Matthias and Nick Bonino had a great shift at the end of the first, and five minutes into the second Kass was getting engaged physically. He led the Canucks with 5 hits on the night – the biggest being a late hit on Patrick Maroon – but it was good to see him trying again.

At the end of the game, Kassian was one of only five Canucks forwards who had a positive ES corsi +/-. The others were the Sedin line and Shawn Matthias.

If you watched the game, those guys were certainly most noticable in terms of scoring chances too.

Maybe Kassian can avoid the press box for a game?

I’m scared to admit this to you, but I have never watched the Game of Thrones… apparently “the Wall” is a crappy place to be.

More on the Wall: Cory explained the pic to me and then showed me a picture of the Wall. I wouldn’t want to be banished to it.

Elliotte Friedman posted his 30 thoughts column earlier today, and out of the 30, there wasn’t a single mention of the Canucks.

Come on, Elliotte, can’t you at least fill the void with some pointless words? Think – “WWDD” (What would Dreger Do?) Something like:

“Are the Canucks looking to move Zack Kassian? I would say they’d be wise to. That said, I wouldn’t be surprised if he didn’t get traded. My sources say people are talking. That said, nothing has happened yet.”

While Friedman didn’t mention the Canucks, he did write this:

“The Minnesota Wild are in the market for goalies, and not just at the NHL level. American Hockey League, too.

Sounds like GM Chuck Fletcher is making it a priority to re-stock the organization after injuries and illnesses wreaked havoc at the position the last few years.”

Friedman has wondered if there was a potential deal to be made between Minnesota and Vancouver in the past, but he wondered if the Canucks would trade with the Wild given they’re in the same conference. Does Benning think like that?

Does he picture watching Jake Virtanen or Niklas Jensen going coast-to-coast in the future, deking out 5 players on the way to Minnesota’s net, only to be stopped by Eddie Lack, thus knocking the Canucks out of playoff contention?

Maybe he should trade Jacob Markstrom instead?

ESPN.com’s Pierre LeBrun has something to say about the Canucks potentially trading Markstrom:

The Canucks were open to trading Markstrom earlier this season, but word is now they’ve decided to keep him given how impressive his development has been this season.

Markstrom, who turns 25 on Saturday, has a 1.92 goals-against average and a .934 save percentage in 18 games this season. There are some in the Canucks organization who believe he could be the next Ben Bishop in terms of being a late bloomer.

In honour of Ryan Kesler being back, The Tron Army (@tronarmy) held a Disney Shap contest. TSN 1040’s Satiar Shah was the judge. His winner:

Definitely the winner. No doubt there.