Right from the start of the game, you knew this one wasn’t going to be pretty as the Kings thoroughly dominated the Canucks, peppering Ryan Miller with shot after shot. Although the score didn’t show it, the Canucks got royally decimated tonight.

However, Vancouver did manage to make this interesting (somehow) by jumping out to a 2-0 lead. Unfortunately, the script was once again fairly predictable as the Canucks would fall 3-2 to the Kings after some late-game heroics from Justin Williams and Jarret Stoll.

So if you are still a tad hungover from last night’s festivities, crack this SixPack because it couldn’t possibly make you feel any worse. Well, maybe it could.

Plus, read on and you’ll find a special bonus piece of inside information at the end!

Other than yet another outdoor game in a baseball stadium that featured the exact same teams it always does, the big news of the day was Zack Kassian being cleared to play, but still getting scratched by Coach Willie Desjardins. The Twitterverse, as usual, took the news in stride:

#Canucks Kassian cleared to play but it doesn't look like he will tonight versus #kings. Feel like I've tweeted that before.

Time to ask out RT @sportsnetirf: Desjardins says Kassian is cleared to play and him not being in tonight is the coach's decision. #Canucks

There is no doubt that Zack Kassian can have a major impact on the Vancouver Canucks when he is on his game. The problem is that it has barely happened this season. Many believe he hasn’t had much of an impact because he hasn’t really been given a chance to blossom in the top-six role that he should eventually assume once he develops a little more.

One reason for the anger amongst the Canuck fan base is the fact that Linden Vey, who other than a few flashes and some power play goals, hasn’t been good yet has been given a never-ending leash by the coaching staff. This perception is partially fueled by the fact that Vey is a former Desjardins coached Medicine Hat Tiger and was acquired by General Manager Jim Benning whereas Kassian was merely inherited from the previous regime.

Which brings me to my next point: Will Zack Kassian ever get a fair shot under the new regime led by Trevor Linden, Jim Benning and Willie Desjardins?

Tony on Kassian and the new regime: "They don't like him.." hinting he has spoken to Benning about him off the record.

This little tidbit courtesy of the Province’s Tony Gallagher (and helpfully shared by Taj) maybe shines some light on Kassian’s future with the team. However, Kassian is still a Canuck as of today and has the potential to be a very good player.

I’m not going to sit here and pretend that I’m not a little confused by this decision myself. Kassian has the skills to be a massive part of the future in Vancouver but never seems to be able to gain the confidence of anyone in the organization. Yes Kassian will make his mistakes, but many other Canucks have been making mistakes but are receiving second and third chances. See: Horvat, Bo.

Ultimately though, I am not a coach, nor a professional scout employed by an NHL team.

Therefore, I will let Jay sum up my feelings on the situation:

Vancouver fanbase still hasn't figured it out. Coach is ALWAYS in better position to determine Kassian's role and impact than Twitterverse.

3. Alex Burrows is Back to Being Awesome 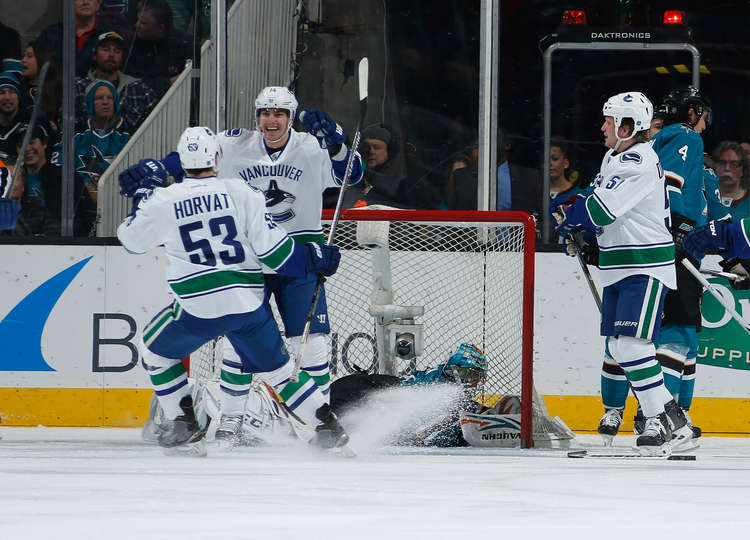 Alex Burrows has been having himself a nice little run despite finding himself relegated to the fourth line with Bo Horvat and Derek Dorsett. That is, if you even want to call it the fourth line since they had scored in the previous three games leading into Sunday’s match with the Kings.

The biggest difference that Burrows has made over the past few weeks has been his promotion to the first unit power play as the net-front presence. The power play had be struggling mightily and lacked creativity as teams found out how to stop the Sedins and Vrbata. The solution? Put Burrows in front of the net and watch him score greasy goals. Which he was kind enough to do tonight.

The power play has been noticeably dangerous since the addition of Burrows. Now, only if they got more opportunities to actually do something about it.

Love Burr, Twins and Vrbata on the PP together.. Gives the Twins 2 different looks they are accustom to at the same time. #vcbcanucks

Maybe Burrows can have a quick chat with Zack Kassian…

4. Penalties an Issue Once Again

Penalties were once again at the forefront of the Canucks’ problems tonight. If it wasn’t ill-timed penalties that led to game-tying goals, it wasn’t working hard enough to get their own power plays.

Over the past three games, the Canucks have only had one true opportunity on the power play, which they actually converted on tonight. Although it’s fun to blame the refs or bring up conspiracy theories that the league is still out to get the Canucks, you can see just by watching the games that the Canucks are not doing enough to actually earn their power play opportunities.

This hasn’t been a huge issue over the last stretch of games because thankfully, the Canucks’ penalty-kill is dynamite. Unfortunately though, Justin Williams managed to convert on the King’s last chance late in the third period to tie the game at 2-2. It was then only a matter of time before the Kings put the final nail in the coffin.

This game is more predictable than a Sharks playoff run

Give credit where credit is due. This tweet was sent out when the Canucks were winning 2-1. It was the exact same feeling that I had last Sunday when the Canucks played Anaheim. Sure, Vancouver was winning 1-0, but they were being dominated by a superior opponent and it would eventually catch up with them.

It is so dangerous to play the way the Canucks have been playing in the third period with a lead and we have seen this with every single coach this core has had. When the team shuts down their offence, it gives the opposition way too many opportunities and considering that they can’t rely on Ryan Miller at this point, bad things will inevitably happen.

Would it have been nice for the Canucks to win? Obviously. But did they deserve it? Not a chance

How many points do the Canucks deserve tonight, while being outshot 40-16?

Any chance to get in a reference to “What’s Eating Gilbert Grape”, I’m going to take it. I’m already feeling better about the loss!

I’ve never really been a fan of Dustin Brown. Mostly because he’s the overpaid captain of one of my least favourite teams and he dives probably more than any other player in the NHL.

To help advertise the SixPack, I sent out a tweet asking people to make fun of Dustin Brown. Even though I was only about 65% serious, I received some gems and decided to dedicate an entire Can of the Pack to to the cause. Hopefully this helps heal some of the wounds from tonight’s game:

@lankey22 How can one make fun of Dustin Brown? His potato-counting concentration face is world class. #vcbcanucks pic.twitter.com/qIlBPk6Ecx

@lankey22 @VancityBuzz #vcbcanucks Dustin Brown is almost as terrible as the Canucks' DJs.

Just a little bonus for all you Vancity Buzzards out there. Word came in late Thursday night that a fan favourite will be getting the boot on Friday morning:

Sestito will be on waivers tomorrow. #insider

That’s right. Tom “Top-Sixtito” Sestito will officially be given his walking papers on Friday. This really shouldn’t come as much of a surprise to anyone as Sestito has barely been able to get any game action this season, even recently voicing his displeasure about the situation.

Tom Sestito has a lot of fans in Vancouver, thanks to his physical style that perfectly suits playing in the tough Western Conference. Quite frankly, the way that the Kings were playing tonight, the Canucks could have used some Sestito. It’s all a moot point now though as it appears his days as a Vancouver Canuck/Utica Comet are over.

If you are skeptical about the news and are waiting for TSN’s Bob McKenzie to tweet this out, I can’t blame you.

But I would trust Taj on this one.