When you circled this game on your calendar before the season, you were likely looking forward to Ryan Miller vs his old team or the return of Cody Hodgson. In reality, neither played much of a role in the game tonight, as the Canucks beat the tired and terrible Sabres 5-2.

Usually we don’t take requests in the SixPack, but when someone is giving props to the Lush Man and the Game Day Report, you have to take notice:

@RobTheHockeyGuy wow…@IanLusher predicted the #Canucks win again. Crazy. We should start betting. Worthy of the 6-pack?? 😉

What else did some female Canucks fans take notice of?

Don’t worry Pagani, the SixPack has you covered there.

#NHL Commissioner Gary Bettman speaking at @RogersArena. No major announcement, but he will stay for tonight's game. pic.twitter.com/B28nLvWzZY

Everybody’s favourite commissioner was back in Vancouver today. Seriously. Never have I heard so many Vancouverites throwing bouquets the way of the NHL commissioner.

@RobTheHockeyGuy He has done nothing but good for the NHL and the players. Why the hate?

Good interview with Gary Bettman by @DonTaylor5 on @AM1150. I actually like what I am hearing. Good questions & interesting answers. #NHL

I'm actually enjoying this Bettman interview, thought at the start I'd just rip him

Bettman was doing the rounds in Vancouver today. He gave a press conference at Rogers Arena, he gave an in-studio interview with B-Mac and Taylor on TSN 1040 and he attended the Canucks-Sabres game where he gave a between periods interview with Dan Murphy from Sportsnet.

If you missed @NHL commissioner Gary Bettman today on #TSN1040 with @BmacandTaylor, hear him here: http://t.co/cmRFEvdWbW

Did he say much? No, although it certainly sounds like the NHL wants an expansion team in Seattle, but they need a stadium first. But it was a rare moment where Gary Bettman sounded human and not like a condescending jerk.

It’s true! In a story reported sometime ago, Gary Bettman walked into the Flying Beaver Pub, near YVR in Richmond just moments after handing Zdeno Chara the Stanley Cup in 2011. He ordered the salmon burger, posed for pictures and watched the riot unfold on TV with heartbroken Canucks fans.

Here’s the a clip of the story from Deadspin:

At the Flying Beaver in suburban Richmond, a bar and grill just beyond the airport fence that overlooks the mighty Fraser (slogan: Give’r on the River!), the mood was sombre. During the game, it had been standing room only, with fans in Canuck sweaters screaming and clapping thundersticks, and a siren occasionally wailing from behind the bar. Now, only a couple dozen patrons remained, nursing their beers and watching the riot unfold on the big-screen TVs.

The five guys who walked in wearing nice suits would have stood out at the best of times. But it was the little one who drew most of the attention. Less than an hour after people in the pub had been booing him every bit as lustily as the fans at the game, Gary Bettman was suddenly standing among them. “It was like one of those scenes in the movie where the bar goes all quiet and every head turned,” he says. The private jet wasn’t quite ready to head back to the airfield in New Jersey, so the commissioner, his deputy Bill Daly, spokesperson Frank Brown, NHL vice-president of marketing Brian Jennings, and a hulking ex-cop from league security, had gone in search of dinner.

There was a bit of grumbling at the bar, and a couple of regulars threw epithets over their shoulders as they weaved their way to the washroom. But mostly, people were excited. They approached politely to shake hands and seek autographs. Several had their pictures taken with Bettman. When the floor manager called the owner—who was stuck downtown among the mob—to pass on the celebrity sighting, he had her send over a couple rounds of the house specialty: espresso, vodka, Kahlua, and milk in a rocks glass—a.k.a. The Shaft.

Munching his meal while watching cop cars burn was a bit surreal, but otherwise it was a typical Canadian outing for the NHL commissioner. All that free-flowing abuse from the stands never seems to amount to much when people encounter him face to face. They’re respectful, even friendly. It’s the kind of thing that allows him to think that maybe, deep down inside, fans really do understand and appreciate him. And the salmon burger at the Flying Beaver was terrific.

Of course, not all the reviews were positive…

Make sure to shower after watching this slimeball being interviewed by Murph. 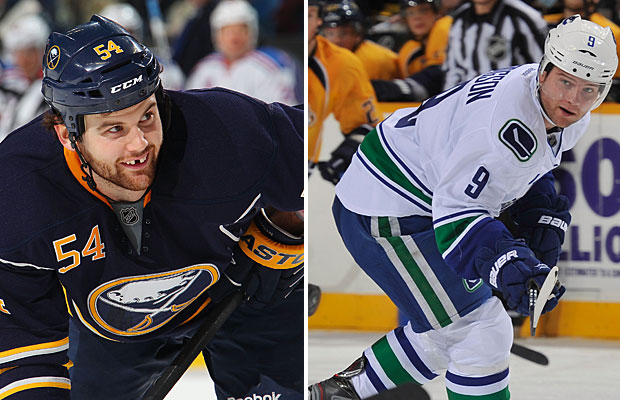 Sabres vs Canucks means Hodgson vs Kassian, right? The trade that shook the foundation of the Canucks’ championship window almost 3 years ago is a bit of an afterthought now.

But if you were hoping for a comparison of the two players tonight, you were disappointed. Cody Hodgson was a healthy scratch (again):

The #Sabres would rather dress 7 D instead of Hodgson. #Canucks

I can't help but laugh at the meltdown Chris Hodgson is probably having right about now.

To be fair to Cody Hodgson, I also am not good enough to play in the NHL

So who won the trade? Right now, it looks like both teams lost.

But for tonight at least, the Canucks were the winners. Cody Hodgson (7 points in 48 games) couldn’t get into the lineup on the worst team in the NHL. Zack Kassian (6 points in 26 games) got into the lineup and managed to pick up an assist.

Of course the game included a couple of moments from “perimeter pass Kass” and a stupid penalty, but other than that I thought he looked pretty good. Baby steps.

If I had kassians hair I'd make sure my helmet stayed on. #tightenchinstrap

If I had Garry Valk’s fake tan, I might stay clear of shots about personal appearance.

3. Keep calm and Tanev On

As if anyone doubted him before, the Tan Man is proving his worth this season. A year after his breakout season, Tanev is proving he is a legitimate top 3 (or better) defenceman this season.

Everyone plays better with Tanev. Even as a raw rookie, he was the only one that could get the best out of Keith Ballard. This year he is helping Alex Edler enjoy a resurgent season. Tonight, he was split-up with Edler, but managed to get the best out of Dan Hamhuis (who has struggled this season).

Yes they were playing the worst team in the NHL, but Hamhuis managed to have the best even strength Corsi rating tonight, and it’s probably no coincidence that it was done alongside the Tanev.

What can’t Tanev do? Not only does he get Hamhuis back on track, but he sets up Chris Higgins for his first goal in 13 games. That’s a Kierra kind of goal right there.

Whenever Chris Tanev sets up someone for an open net, it brings up some memories for those of us that can’t get over 2011…

Higgins did what Tanner Glass couldn't #2011

Anytime Tanev makes a great pass I think to myself "Tanner Glass would have missed that…."

@RobTheHockeyGuy you have serious #2011 issues

Rogers Arena, site of loss No. 14 in a row for #Sabres or the first win of January? pic.twitter.com/nbMMrUcWd3

I attended tonight’s game in the 300 section of Rogers Arena, so I feel like I got a good handle on the fan experience tonight. For once, I must say the in-arena atmosphere was actually pretty good. Sure, it was the lowly Sabres in town, but it was a Friday night and people were feeling good. Even before the Canucks started scoring goals. Maybe it was the liquor, maybe it was the best night this season by the new Canucks DJs (seriously), but in any case it was great to see Rogers Arena with a bit of atmosphere.

Even the wave was well timed tonight. Kudos to the guys in the lower bowl that started it with a two-goal lead during a break in play.

But what I would like to recognize is all of the Sabres fans in attendance tonight.

The Sabres are a bad team, in fact, they’re the worst team. They have been a bad team for a while and they’re not going to be good for a few years either. And they’ve never won a Stanley Cup. As a Canucks fan that has seen some bad teams play over the years, I can sympathize.

But still, far from their home town, Sabres fans poured into Rogers Arena to see their crappy team crap the bed.

I admire fans of crappy teams. Anybody can become a fan of a team when they’re good (looking at you Vancouver Seahawks fans), but it takes a real fan to support the team when they suck.

If the Canucks can stay afloat and make the playoffs this year, then they may look to Kevin Bieksa’s hand injury as a blessing in disguise, provided Bieksa returns to full health and ability before the end of the season.

I’m speaking here about the opportunity for right-shot defenceman Frankie Corrado, who is going to get a longer look with Bieksa out of the lineup.

Corrado had the second best even strength Corsi rating tonight (+19), playing with Alex Edler on the Canucks second pairing. He doesn’t look out of place and he may just earn a regular spot in the Canucks’ lineup.

If not for this phone call, Wayne Gretzky would have been a Vancouver Canuck: http://t.co/Xq0u51AzlV pic.twitter.com/5TqlRzmXyG

Elliotte Friedman told a story that probably is of some interest to Canucks fans on Sportsnet 590 in Toronto this morning. He told the tale of how Wayne Gretzky almost became a Vancouver Canuck in 1996, the year he eventually signed with the New York Rangers.

This is a story that has been told before, but not in this kind of detail. Gretzky has stated before that he thought he was going to be a Canuck. The deal fell through at the last minute and you’re not going to believe the ridiculous reason why.

“McCaw got on the phone to Quinn (Vancouver’s president and GM) and said, ‘We want this done tonight.’ “

Quinn told McCaw that Gretzky was committed and not to worry.

“No, no, no. We’re doing this tonight. I want it formalized. No questions,” McCaw instructed Quinn.

Quinn called Gretzky back and asked him to sign the papers that night.

Gretzky replied with: “I told you I’d sign them the morning.”

The whole deal blew up over that, Friedman explained.

Lucky for the Canucks, they signed Mark Messier the very next offseason. Wait, what?