Well, it didn’t take long for things to get going. Having knocked off Boston last night, the Canucks knew they were going to have to come to play early. Well, a few did… mainly Ryan Miller. It was clear Calgary had a game plan entering tonight’s tilt: don’t let the Canucks’ third line on the scoreboard. 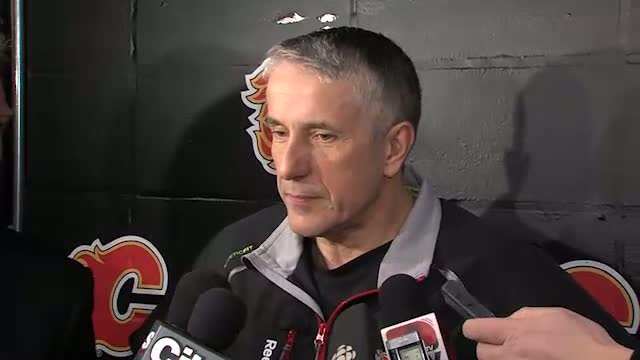 Well, the third line can only be stopped for so long and seeing as the Canucks really have two third lines, it is doubly difficult for the opposing teams to keep them at bay. Shawn Matthias had the hat trick last night against Boston which led many to believe he should be scoring at that rate from now until April. I’m not sure the puck had even dropped and people were already giving him a hard time.

Usually, happy hour starts around 5:00pm on a Friday afternoon post work. Well, with Ryan Miller getting the start on the second of a back to back set, the bottles were popping well into Saturday evening. Just ask Twitter what the first period was like!

This was after some stellar “one man penalty killing”.

Miller keeping them in it early

This was an understatement. Shots were 10-3 at this point just over fifteen minutes in.

Noureen Dewulf is an actress with connections in Hollywood. Is it really that difficult seeing her get her beau a cameo in some Batman reboot? Okay, don’t answer that.

To the surprise of some, and the delight of so many, Ronalds Kenins was kept in the lineup as opposed to slotting in recent waiver-wire pickup Brandon McMillan. Well, to quote one Wilbrod Desjardins, “That’s real good”. In just 7 games, Kenins has three goals and has been a wrecking ball along the boards. He was rewarded late in the first period.

The #Canucks' first goal tonight has been brought to you by the letter "S". Ronalds Keninsssssss!!!!

This would be an excellent development. I am in full support of this.

If I’m being totally honest, I have no idea what these mean, but I love watching this kid from Latvia put the puck in the net.

Kenins back into Canucks top 5 all time goals per game, behind Bure, Mogilny, Tanti, and Derek Sanderson. Rota 6th. #Latvia

3. The Kids Are Alright

Bo Horvat is turning it on. Of that, there is no doubt. Not only has been producing on the scoresheet, but he’s been playing more (career high ice-time against Boston) and matching up with some pretty impressive competition. He’s had 7 points in the last 9 games to put together the best offensive stretch of his young career. In fact, with his assist on the Kenins goal in the first period, Horvat joined teammate Linden Vey alongside some heady company.

For those too lazy to click the link, Linden Vey is 11th on that list. He added to his own total by knocking in a juicy rebound late in the second period.

I will ALWAYS get on board with a Happy Gilmour reference. ALWAYS.

On the Flames’ first goal, Chris Tanev appeared to be in dire straits after hitting the back of his head heard enough on the post to dislodge the entire net.

That’s generally not a good thing… thankfully, Tanev played out the rest of the game and appeared to be alright. Well, Alex Edler wasn’t so lucky. There are the usual suspects regarding theories out there: bad hit, uncomfortable after a tough back-to-back, etc., but Wyatt has the night’s best.

In any case, Ryan Stanton’s head is absolutely spinning.

He may have scored two goals tonight, but Sean Monahan’s lasting impression will be the amazing parody Twitter profile made in his likeness. Many suspect that Brian McGratton is the artist behind the masterpiece and if we’re lucky, it will be around for a long time. If you’re not following this profile, do it now. These are just some of the boring remarks you can look forward to…

The temperature in the dressing room is quite reasonable this evening.

If I played defence like they're playing in the All-Star game coach Hartley would be mad at me.

I asked the team if they like how warm it is in Arizona and they said they like it.

Well, it certainly wasn’t the result that most Canucks fans were hoping for, but the truth of the matter is the Flames are better than they’ve been in a long time and they’re no longer Northwest/Pacific Division pushovers. Well, at least not when they’ve got the second highest shooting percentage in the league.

Nonetheless, the fact of the matter remains… the Canucks have a game in hand, and thus a higher point percentage, but the Flames have the same 65 points the Canucks do. Minnesota and Los Angeles each won again tonight, so they’re making a charge. If the Canucks can’t string together some wins, it’s going to be mightily uncomfortable down the stretch.