Friday night marked the return of an old and hated foe to Rogers Arena as the Vancouver Canucks and Boston Bruins locked horns for game eleven of their never-ending Stanley Cup Final series.

The night started the way you probably didn’t expect. With hordes of Bruin fans invading Rogers Arena. Who knew there were so many in Vancouver?

I swear I'm at a Canucks game. pic.twitter.com/NW0IfGcoWA

Honestly, are all these Bruins fans walking among us every day, undetected and unchecked?

It’s good to see the rivalry is still alive and well. Hockey is just so much more fun when you have teams around that you absolutely hate. And hate with a fiery passion.

Anyways, tonight was a good night as the Canucks walked away with a 5-2 victory over the Bruins. No matter what the context, Vancouver beating Boston is always a fantastic event to witness.

Pretty sure it doesn't get better for #Canucks fans than beating the Blackhawks and the Bruins.

So to celebrate, why not crack open a Sixpack?

Who would have thought the most motivated Vancouver Canuck would be Shawn Matthias? If I had to guess, the coaching staffed locked him in a little dark room and showed him endless clips of 2011 to piss him off, even though he wasn’t even a member of the Canucks at the time. Sigh, what could have been…

Who knew matthias was the missing piece in 2011

And as if three goals wasn’t enough to endear him to the Vancouver faithful, Matthias also dropped possibly the greatest statement about the Canucks-Bruins rivalry. It’s a statement that might have gone a long way in 2011:

'Who cares about what they do, were expecting them to hit & we're just going to give back to them' – Matthias during intermission #Canucks

Shaw Matthias is awesome. But not just because of the hat trick. He has also played a huge role in the rejuvenation of Zack Kassian which, quite frankly, qualifies him for sainthood around these parts.

Matthias damn near giving me a hard on after only 5mins of hockey!! #BuddingPowerForward #vcbcanucks

Just remember to seek medical attention if it lasts more than four hours….

Shawn Matthias wasn’t the only Vancouver Canuck busy endearing himself to fans on Friday night. Latvian sensation Ronalds Kenins, who is probably very aware of his precarious position in the lineup, did the only thing he could possible do: Try to destroy Zdneo Chara.

Ronalds Kenins taking runs at Zdeno Chara. Have to admire his spirit.

Ronalds Kenins with three hits on Chara on the last two shifts. Brb buying a #41 jersey

Like Matthias, it seems Kenins studied what has been a sore spot for Vancouver fans over the past four seasons. By having the willingness to take on Chara, Kenins is quickly proving that he is a capable fourth line player on the Canucks. In fact, he is exactly what the Canucks need on their fourth line. He’s even inspiring others to get into it:

I swear I just saw Horvat go shoulder to shoulder with Chara and take him down. (Horvat went down too)

The Matthias hat trick was great but highlight of the night for me was when Horvat went at Chara and didn't back down an inch.Future captain

I couldn’t possibly keep going with this Sixpack without mentioning Zack Kassian.

Although his ice time is still fairly limited, Kassian seems like a completely different player ever since he returned from his latest round of healthy scratches.

The highlight of his night? Has to be his Sedin-esque pass to Matthias for the opening goal of the game. It was beautiful:

Here's a look at Matthias' first goal – assists by Kassian and Dorsett. #Canuckshttps://t.co/DRqLHjkfwp

I could watch that over and over again.

We’ll return to your regular scheduled programming in a just moment.

Somewhat of a shocking revelation was revealed today on the Team 1040 when Vancouver Giants owner Ron Togo appeared on the BMAC & Taylor show and dropped this little nugget regarding the dearly departed regime of Mike Gillis:

Toigo: Benning has been at more games this year than the last regime had been to in the past 5 years.

First off, props to GM Jim Benning on doing his due diligence and scouting the Lower Mainland for some local talent. It’s been well documented that Benning loves the scouting side of hockey management and never hesitates to attend a game to see what’s out there. It’s incredibly refreshing to have a General Manager that genuinely enjoys it because hopefully that will manifest itself into some decent prospects moving forward.

Having said that, what the hell, Mike Gillis?

You spent roughly five years in Vancouver and Jim Benning has already surpassed the amount of time you and your regime spent at the Pacific Coliseum?! That’s just wrong on so many levels. If the Canucks barely spent anytime watching the Giants, how much time did they really spend on the scouting players? This might explain their piss-poor draft record over the past few years.

I’m not saying the sole focus of an NHL franchise should be scouting junior aged players that happen to be in your backyard. But you can at least go check out a couple of Giants games in your spare time. It’s not that far. I even google mapped it! 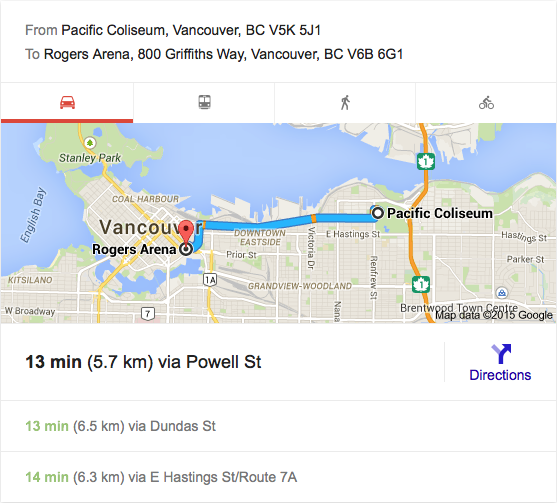 Okay back to the Canucks beating the Bruins!

We are less than 30 hours away from #GameEleven with the series tied 5-5. #icantletgo

The Canucks are now leading the non-series against the Bruins 6-5 and with their final matchup only two weeks from now on February 24th. This time, in the not so friendly confines of the TD Gardens in Boston.

Long as this isn't the emotional high point of the #Canucks season, we're all good. And I think they're just getting started.

As much joy as beating the Bruins brings to Canuck fans in British Columbia. It’s also great when the Bruins start to throw each other under the bus:

Julien called passing decisions of Hamilton and Seidenberg "mind-boggling." Rask said those plays "can't be made in peewee hockey."

Unfortunately, There isn’t much time to celebrate as the Canucks will be travelling to Calgary to take on the Flames tomorrow night.

I can’t remember the last time a game against the Flames could be considered important, but tomorrow night will be massive as both teams are jockeying for a position in the Stanley Cup Playoffs. With LA finally giving a crap, tomorrow night should be epic as neither team wants to lose their spot to the Kings.