Coming into Sunday’s game, the Coyotes had one win in their last 18 games. ONE. IN. EIGHTEEN.

One problem: that win came over Vancouver. That March 5th Arizona win ended a 10-game losing streak, and on Sunday, they were looking to end yet another losing streak – this time seven games.

They nearly did it too. Sunday’s game was still tied with five minutes left, and at that point it could have gone either way. Luckily for the Canucks and unluckily for pharamacists selling anti-anxiety pills, Vancouver pulled out a 3-1 win with two late goals.

Aside from on the scoreboard, the Canucks dominated. They outshot the Coyotes 44-25 and held the edge in even-strength Corsi for 68-58. Here’s the chart of even strength scoring chances from war-on-ice.com: 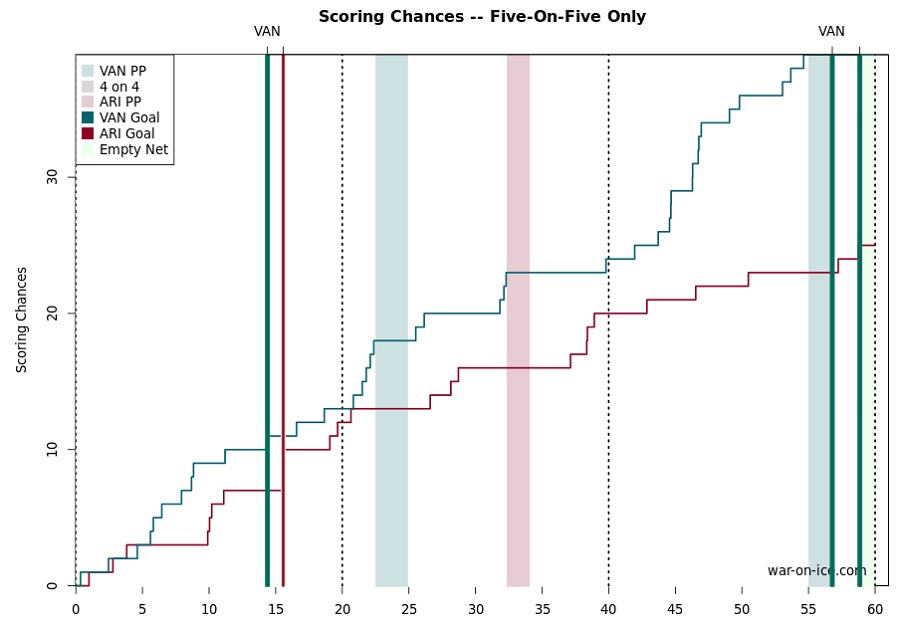 The only thing Vancouver didn’t dominate was the faceoff circle, where they went 26-38, but that’s normal. Expecting them to win that battle would be like expecting Kanye to become humble.

It felt as if the Canucks should be leading by 3 or 4 goals halfway through the second, as the Canucks had hit four posts already.

Not only was it unfortunate to be watching a tied game, but enduring some of the post-related tweets was a little like banging your head against a post too.

There’s been more iron in this game than a medieval blacksmith’s, jeez. #Canucks

So lame it was funny?

We are slowly bending the posts outward to make the net bigger. We #Canucks are sneaky bastards. #pingpingpingping

Even Alex Edler’s game-winning-goal was actually a shot at the post that flukily went off Arizona’s goalie and into the net.

I’m still laughing about more iron than a red blood cell, to be honest.

I probably don’t have to tell you what happened in Jacob Markstrom’s first NHL start this season… but I will anyway.

He allowed 3 goals on 4 shots against San Jose. He was pulled after 7 minutes of playing time. He posted a save percentage of .250. And those were his stats for this season until tonight’s game.

Pretty sure everyone in Vancouver – #TeamMiller, #TeamLack, OK maybe not #TeamDemko (is there anyone on #TeamDemko yet?) – wanted to see him improve on that.

As for that one goal, Markstrom gift wrapped it to Oliver Ekman-Larsson with a rebound juicier than Kim Kardashian’s…

Just check it out. This is a video of the goal, btw. Nothing else.

Sbisa could’ve helped his goalie a lot more than he did too, but expecting that would be like expecting Kanye to become hu… K, I need some new material here.

Two wins over the weekend and this view is starting to look better. 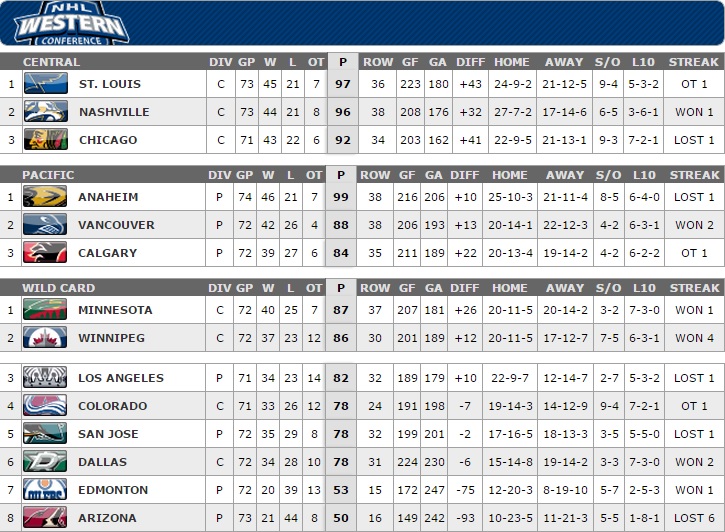 As good as it is seeing Vancouver solidifying it’s position in the race, it’s even better seeing Calgary in that playoff spot ahead of L.A.

Pretty sure everyone agrees the Canucks don’t want to face the Kings in the first round, or ever, really. But also, seeing an all-Canadian matchup in the first round – it would be amazing, it would emotional, and the entire country would be watching.

When Rogers bought the national broadcasting hockey rights from CBC, we worried they might not do as good a job as CBC and TSN had done for so many years.

Then they hired almost the entire HNIC staff and we thought we could breathe again.

Then they announced they’d be cutting down Coach’s Corner, changing the host to George Strombolopoulos, and making Damien Cox a major part of the show, and we became scared again.

Then Canucks fans saw commercials featuring Mark Messier, one of Vancouver’s most-hated-on hockey players of all time, over and over, and we realized Rogers had no clue.

During the second intermission of Sunday’s game, Sportsnet aired a feature on Zdeno Chara – the man who captained the Boston Bruins to a Game 7 Stanley Cup win… over the Canucks in 2011.

Don’t get us wrong. Canucks fans know Chara’s a good guy, a classy individual, and an incredible hockey player. But it’s been four years since he snatched the championship away from this city.

So either Sportsnet’s programming director is a complete ignoramus or he’s from Toronto and he’s doing a seriously amazing troll-job.

Chara feature during a Canucks game. Nice. When are they showing highlights of the Bruins stanley cup parade?

So 1st intermission we revisit losing in 94, 2nd intermission they show Chara in 2011, great show! Up next, Bossy in 82! #vcbcanucks #barf

Oh gee just what I wanted in this game, a Chara profile. Wtf.

“I liked the Chara feature during the Canucks game!!” @sportsnet pic.twitter.com/XzfRJC0RJm

Seeing Chara on my tv was nauseating

Vancouver, you got punk’d.

Oh I checked TV Times – Sportsnet’s next intermission feature during a Canucks game is on Brad Marchand and the team-first values his grandfather instilled in him as a child.

6. Sad times for the Coyotes

The camera caught this shot of Don Maloney – the GM of the second-worst placed team in the NHL – during the second period.

The real question is – and it’s a serious brainteaser – was he upset the Coyotes were screwing up tanking (the game was tied 1-1 at that point), or wishing he was the GM of a half-decent team?