Is it really so incredible that a team led by two of the most professional, well-conditioned, consumate leaders in hockey is proving to be such a resilient bunch?

It probably wouldn’t be if not for Vancouver’s last season. Last year, the Canucks, and especially the Sedins were driven into the ground by the end of the year. They were exhausted, they were injured, they were a shadow of their former selves.

This year, under Willie Desjardins, the team is able to come back from a 2-0 deficit after the first period, playing on the second game of a back-to-back.

If you didn’t watch the game, you probably read that line in disbelief. A comeback from 2-0? Against the third-best team in the NHL? Yeah, and they came back from a 3-2 second period deficit too.

It was a back-and-forth battle with a heart-stopping ending, and eventually Vancouver won it 5-4 in the shootout.

1. Hope you had Burrows in your pool

Alex Burrows was all over the stats sheet in this one. He scored a game-tying shorthanded 3-3 goal early in the third and he assisted on the go-ahead 4-3 power-play goal shortly after.

And then, with help from the NHL refs who love to hate him, he managed to put up 15 minutes in penalties with four minutes left in the game.

First, check out the shorty.

Remember when Burrows shorthanded was money in the bank? Man, seeing this goal brought back a lot of memories from over the years.

None bigger than this one.

Thanks to Ry for the reminder.

With four minutes left in the game, Burr got himself in a bit of trouble. He screwed his team too, drawing a 5 minute major that lasted a minute into overtime. Here’s the hit (from @myregularface).

It wasn’t a good hit – not clean. But five minutes? That’s a stretch.

But this is Alex Burrows, and the NHL likes Ron MacLean more than it likes him (hint – the league hates both). Who knows what’s going to happen, but most Canucks fans won’t be surprised if he’s suspended on Wednesday.

For now he’ll enjoy his rewards for this game.

Update as of Wednesday morning:

Burrows will not be suspended by the NHL, as per Renaud Lavoie of TVA Sports.

No suspension for #canucks Alex Burrows. Can't say the same for #jets Dustin Byfuglien. No final decision yet. #tvasports

Vancouver started the game against Nashville a lot like they started against St. Louis Monday night – they gave up a bunch of chances, and weren’t looking very sharp. Unlike Monday, Lack looked like a goalie playing his second game in two nights.

Nashville’s first, scored by Cody Franson, was a long-range bouncer – a stoppable shot. Their third – scored by Stalberg – was one he’d want to have back too.

Even the second – while Taylor Beck was off on a clear-cut breakaway, the hole the puck squeezed through between Lack’s arm and body was something we’ve been conditioned to believe doesn’t exist.

To his credit, and as he does, Lack fought back from the goals. He battled, and when Burr took that five minute penalty, Lack was at his show-stopping best. He made two or three game-savers in the final two minutes, and he made sure the team would walk away with at least one point.

4. Gotta look at the standings 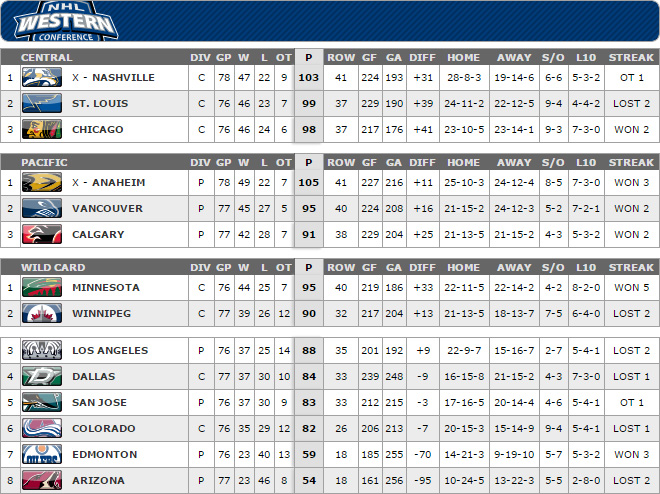 That’s a seven point cushion on the Kings with five games to go.

With the Canucks playing Chicago, Winnipeg and L.A. in their next three, they’re far from home and cooled, but if you’re to start feeling a little excited inside, we wouldn’t blame you.

Just make sure you knock on wood.

Yesterday we ran a caption contest on this hilarious new look from Willie Desjardins.

Twitter follower Stephanie Pagani pointed out the easy to miss yet brilliant “dam it” at the end.

Yes, it was a brilliant tweet. Contact me for your prize (a $10 gift card to the Charles Bar), ZoSo.

As Tuesday’s game was the last one of the month, we also ran our draw for a $100 gift card to the Charles Bar during the game.

The only thing people had to do to enter the draw was have their tweet included in the SixPack in March.

And the winner, chosen by random draw is…

Yikes, this doesn’t look good… and it probably won’t look good when ZoSo’s buying me a beer at The Charles Bar during the playoffs… but that’s the cost of being a double winner in the SixPack.

PS – I’ve never met ZoSo and I wonder if ZoSo is even a name.