To say Miller has been inconsistent for the Canucks this season would do the word inconsistency injustice.

Miller had a shutout Saturday against Sidney Crosby and the Pittsburgh Penguins and he played great. He has played amazing hockey for stretches this season, and he even stole one or two victories.

But what a follow up to that shutout against Pittsburgh. Against Minnesota today, he was bad. He was 5 goals on 18 shots bad.

The Canucks lost 5-3 in a game they actually came to play. They allowed Minnesota to pull within 3 points, and they missed a hell of an opportunity.

The stats were bad. Worse, three of Minnesota’s goals were stoppable. Miller looked slow coming across his crease and he looked unsure. You’d think a 5-0 win over Pittsburgh would boost a guy’s confidence, but with Miller, inconsistency is almost predictable.

At least he earned this badge from our friend photoshapping friend Cory: 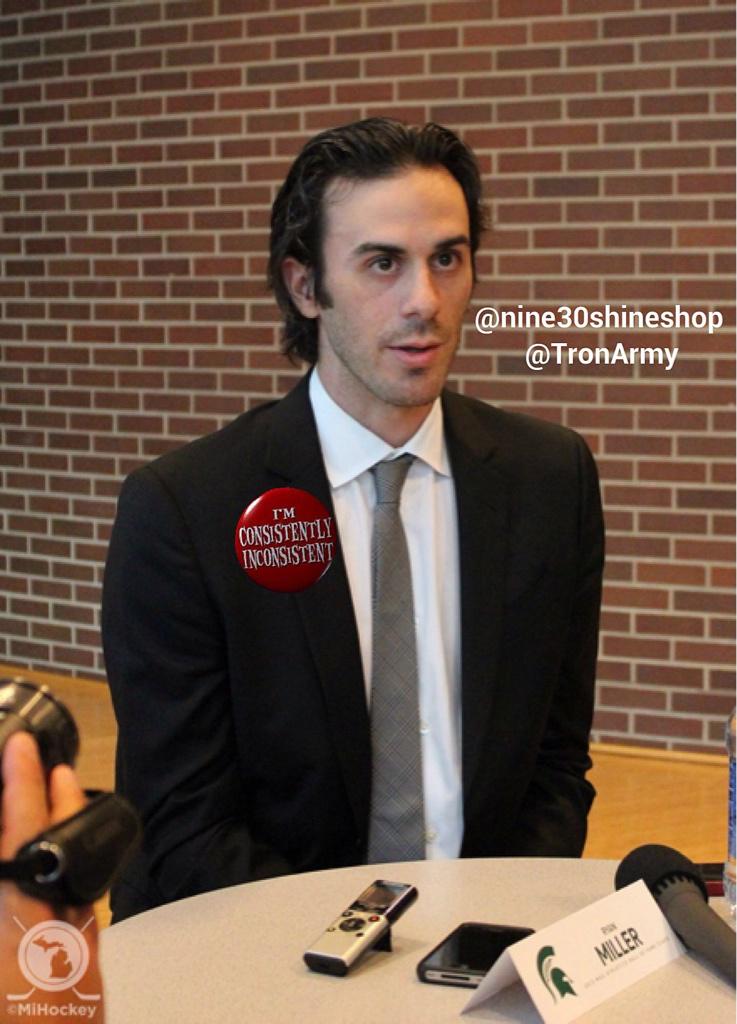 Considering it’ll take a miracle for Lack to get a start over Miller, we’re left with solutions like these:

Down 5-2 after two periods, no doubt the Canucks were flattened by Minnesota on the scoreboard.

But were they flat like they were against Winnipeg last week or Minnesota on Superbowl Sunday? Check out the even-strength shots chart: 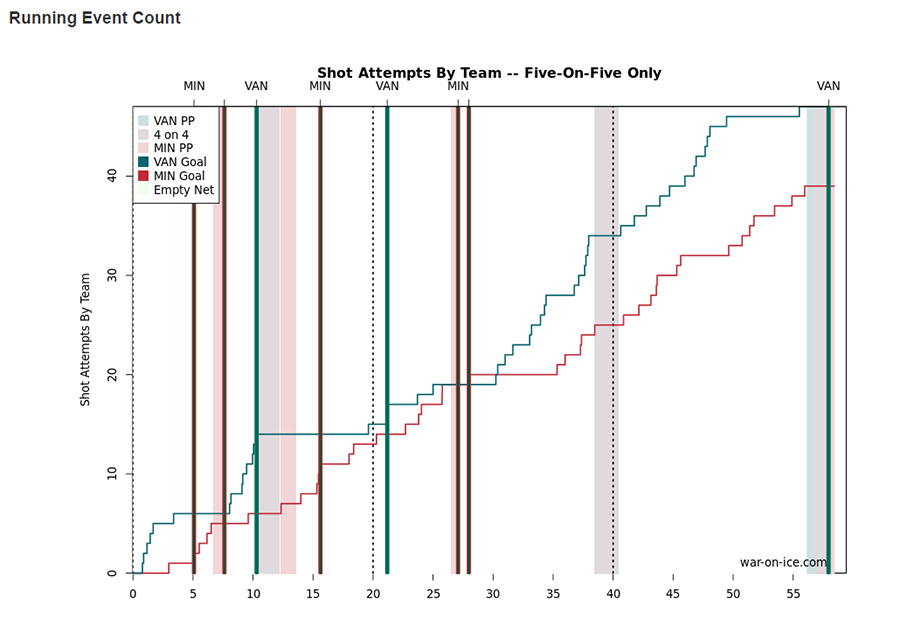 The Canucks actually started the game well, looking to build off Saturday’s win. After two power play goals against and some weak goaltending, though, their effort level dropped.

Again – huge missed opportunity against a team they need to hold off in the standings.

Turns out the Grammy’s weren’t the biggest award show that happened this week. That honour goes to the Blockys. Our undercover cameras caught this shot of the underground awards show. 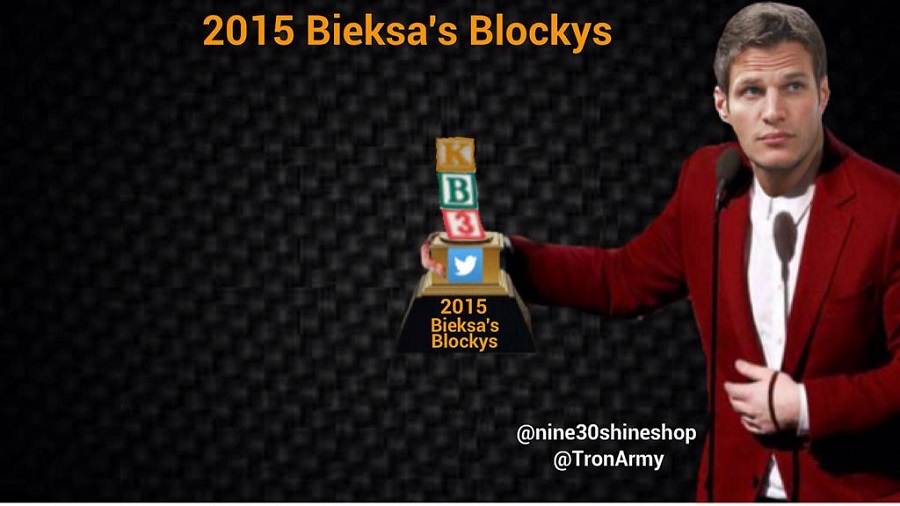 First, before we go any further, all credit goes to Jason Botchford for revealing half the world is blocked by Bieksa in Saturday’s edition of the Provies. 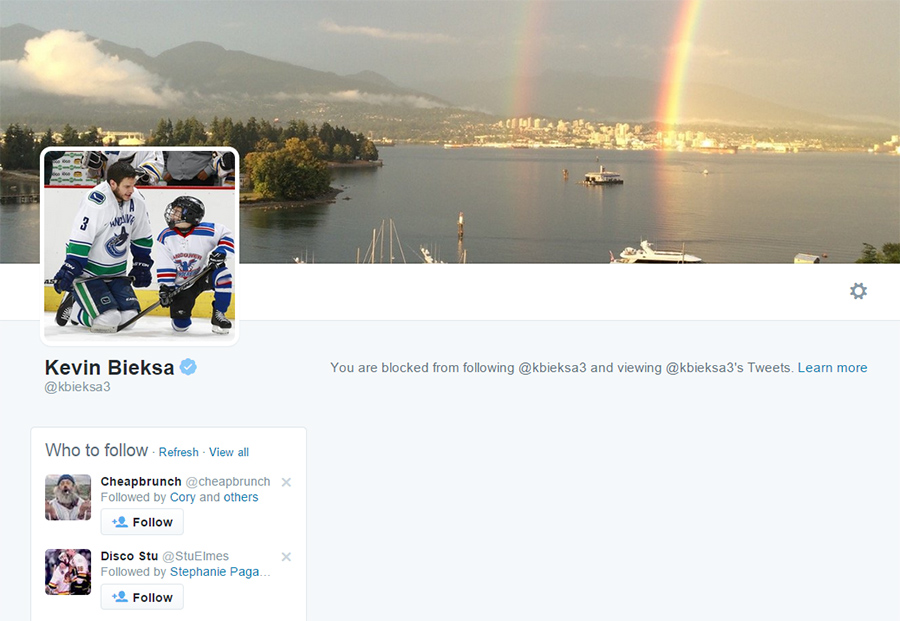 I have to thank my family for all their support all these years. What an honour it is to be chosen for the prestigious honour of a Blocky. (pausing to hold back my tears) I need to thank Vancity Buzz for giving me the opportunity to chase my dreams. Last but not least, I have to thank all of you, the fans. Without you, none of this would be possible.

4. Not sure I deserve this honour…

Just want to add that Bieksa’s blocking me doesn’t make too much sense.

Pretty sure that’s me defending him.

Have I been critical this year? Sure, I’ve written about when he’s a bad game a couple times. I’ve even called him out on his on-and-off play. But at the end of the day, I always give him the benefit of the doubt. Bieksa’s a big game performer, and he’ll be flying come playoff time.

Alas, I will find a way to live without Bieksa’s eloquent, enlightening tweets… (which happens what, once every 4 months?)

5. The spot reserved for Kassian

It wouldn’t be an OmarCanuck SixPack without a section devoted to Zack Kassian.

Remember Zack staring at his hands on Saturday? ZoSo has by far the best photoshap of it so far: 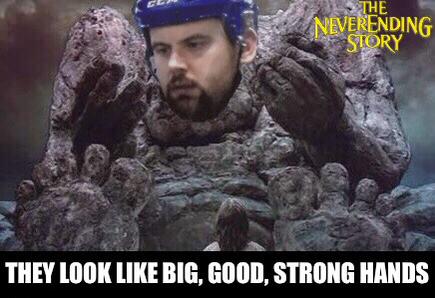 It might just be that this tribute to the Never Ending Story took me back to my childhood, but it’s number 1 for me.

How did Kassian follow up his tap in against Pittsburgh? If you answered by patting Little Linden on the head, you’re damn right!

But he also scored yet another goal, and was looking like 2014 stretch-drive Kassian too.

During the second period, Sportsnet interviewed Zack’s brother Mike, who’s on the dad’s trip with the team. Murph asked how the goal against the Penguins will help his game.

“I think the confidence is a big part of his game. When he has that, he plays a lot better.”

When all the Evander Kane drama began last week, fans immediately began talking about bringing him home to Vancouver. It was a pipe-dream, though. Most fans felt there was no way Jim Benning, who traded Tyler Seguin out of Boston because he didn’t want players he had to “babysit”, would go for it.

Our own Rob Williams ran an article earlier today capturing this and more from McKenzie’s post:

“…the Canucks, Flames and Capitals have thought about it or would at least like to explore that possibility; Kane intrigues them that much.”

Still – it was media doing the talking. Until today. Benning was on TSN 1410 in the first intermission of the Vancouver Giants’ game, and Brook Ward asked him if the Canucks would be interested in Kane.

“I can’t really talk about players on other teams, but we would be interested in him for sure.”

1. Jimbo’s not the best at hiding his feelings, or not talking about players on other teams after saying he can’t do it.

2. Why not try something like: “We can’t really talk about other teams’ players, but let’s just say if ever there was a misunderstood Vancouver-born player, we would look into the possibility of bringing him home.” I’m just saying.

3. The Canucks are looking into trading for Evander Kane. #Confirmed