After a rough 5-2 loss to the Maple Leafs on HNIC, the Canucks switched goalies and came out flying against the Senators on Sunday.

And the scoreboard reflected it – they were up 2-0 after the first period, and 3-0 five minutes into the second. Then the refs took over.

Vancouver took eight minutes of penalties in the second period. They killed off 5 and a half minutes of them, with Eddie Lack looking like a superhero before letting one in on a 5-on-3.

The Canucks loss the game 4-3 in overtime and Lack was their best player.

After three years of the Luongo vs. Schneider saga, Canucks fans were tired of goaltending controversies. To be more accurate: they were completely exhausted and never wanted to hear the term again.

So it didn’t go over well when John Tortorella created one out of nowhere last season, starting Eddie Lack in the Heritage Classic right when Roberto Luongo was feeling happy again.

This one is different, though.

Some are blaming the media/bloggers/Taj for creating an issue with the current black-and-white situation (Miller is the starter based on his salary and the GM’s expectations), but if you look at the results, it’s hard to deny there’s an argument to be made for Eddie Lack.

John Shorthouse put it perfectly before the game.

Shorty on Miller: “He has this amazing capacity to either win or to go down in flames.” #Canucks

Shorty’s not trying to create a goalie controversy. He’s stating the facts.

The question developing in Vancouver right now – which goalie gives Vancouver a better chance of winning, night in and night out?

Now, while this Sixpack writer has been a vocal member of #TeamLack since before the season began, when Ryan Miller plays well, I have no issues pointing it out.

I wrote this in November 7’s Sixpack, after Miller stole a 3-2 victory from Saj Jose:

1. Miller could do this in his sleep

While the team may not have changed how it performs in California, Jim Benning’s biggest aquisition of the summer changed the game’s outcome.

Once again, the most amazing part about a stellar Ryan Miller game was how UN-amazing it looked. Like an accountant punching numbers into a calculator, Miller stands in front of the net and stops pucks. He goes to work and does his job like it’s the easiest thing in the world.

And this after October 30’s 3-2 win over Montreal:

Miller made so many positionally-sound, unsensational saves over the course of the night, it was sensational…

The way Miller was playing at the end of October/start of November had people referring back to his Vezina-winning days, wondering whether he could do it again. He was calm, he was poised, he was unflappable. He looked like he was just finding his groove, and most importantly, he looked mentally untouchable.

He was great then, but even the most ardent Miller supporter has to admit he’s been up and down since the middle of November.

On Saturday vs. the Leafs, Miller wasn’t great. He had questionable rebound control and he looked out of position on a couple of the goals. On Sunday, asked about Miller’s goaltending, Willie Desjardins said he’s been “fine”.

Lack got his scheduled start Sunday, and he was looking like he’d never be beaten until Ottawa got the better of him on the 5-on-3. The Sens’ second goal was a pass into the slot by Mika Zibanejad that was redirected into the Canucks net by Yannick Weber’s skate.

After the Sens tied the game up at the end of the second, Lack stood on his head through the third period to force over time. The shot charts below help illustrate my point.

If you want to see how much special teams impacted the game, check out the even-strength shots attempted chart (from war-on-ice.com). 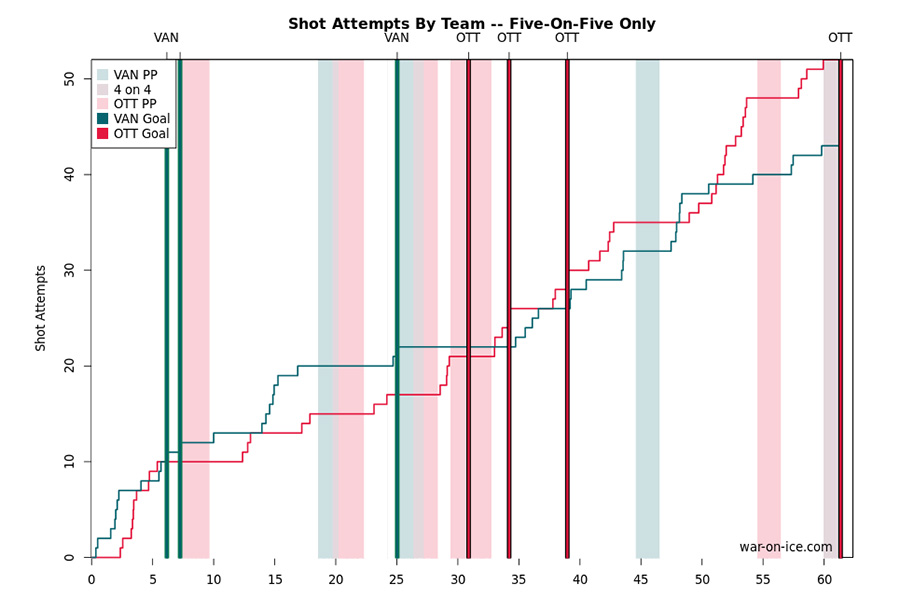 And compare it to the shots attempted including special teams. 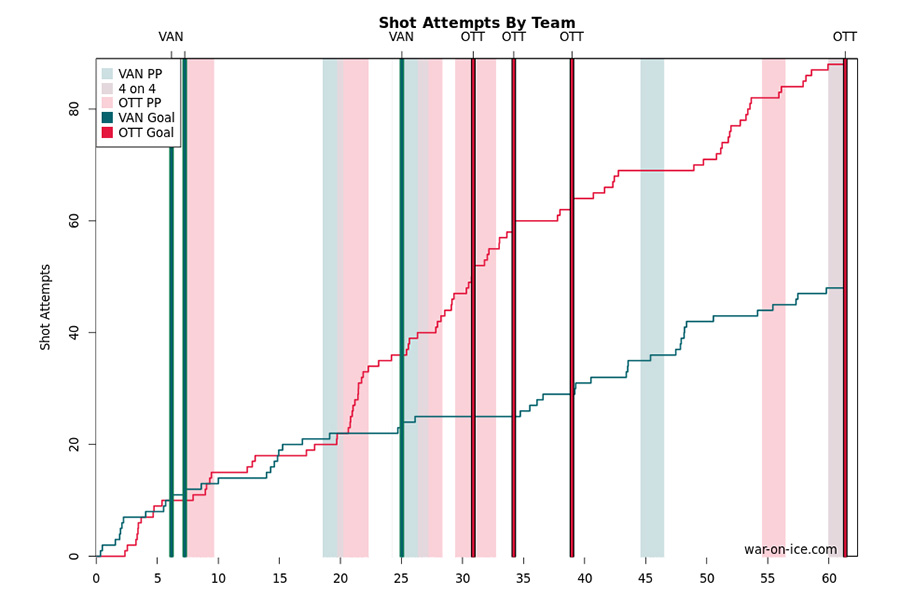 Doesn’t take much to see that penalties killed the Canucks on Sunday. Whether that was the referees’ faults – they made a weak call on Kevin Bieksa and they called a puck deflected off Chris Tanev’s stick a “delay-of-game” – or Vancouver got tired playing in the second half of a back-to-back, “much help” was not what Lack got.

Canucks fans know Kevin Bieksa doesn’t know what the word consistency means. Really, he’s more up and down than Miller, but he’s not the goaltender so he gets away with it.

On Sunday, he was so crappy it was a big deal.

He ended the night with a team-worst even-strength corsi plus/minus of minus-17. His corsi plus-minus including special teams was minus-22.

@omarcanuck bieksa giving the puck away like he’s color blind

Or hung over. RT @nickbondi: @omarcanuck bieksa giving the puck away like he’s color blind

There are many people who think fights are pointless and the entire idea that one could energize a team or get them emotionally reinvested in a game is a farce.

With his team down 2-0, Chris Neil picked a fight (according to John Abbott’s tweets below, for the second time in the game) with Derek Dorsett.

You don’t see it, but after the fight, Neil raised his arms to the crowd signaling he’d won it. That’s why Dorsett lost it and tried to go after him.

Dorsett had plenty to say after the game. John Abbott captured it.

Dorsett on Neil “guy’s been playing in the league for 10 years, has over 1,000 penalty minutes..you’d think he’d have a little bit of class”

Dorsett (cont) denied to fight Neil in 1st because he had a bad hand, but then gave in and thought it was even until ref stepped in..1/2

Dorsett on Neil “…and then he does the jr move and starts waiving on their fans..it’s just Chris Neil, in a nutshell.” #Canucks #TSN1040

Bush-league stuff from Neil, but he pretty much did his job, lighting a fire under his team that led to a 3-goal comeback.

Vrbata With the Highlight of the night!! #MarkItDown #TSN @Sportsnet #vcbcanucks

The Canucks third goal was a goalscorer’s goal in a completely different way. Brad Richardson was aiming far side the entire way, and he picked the spot as perfectly as he could, going post and in for this one.

OK, was Richardson possessed by Stamkos when he shot that? #Canucks

A #bitmuch RT @omarcanuck: OK, was Richardson possessed by Stamkos when he shot that? #Canucks

Dylan’s a downer. Don’t mind him.