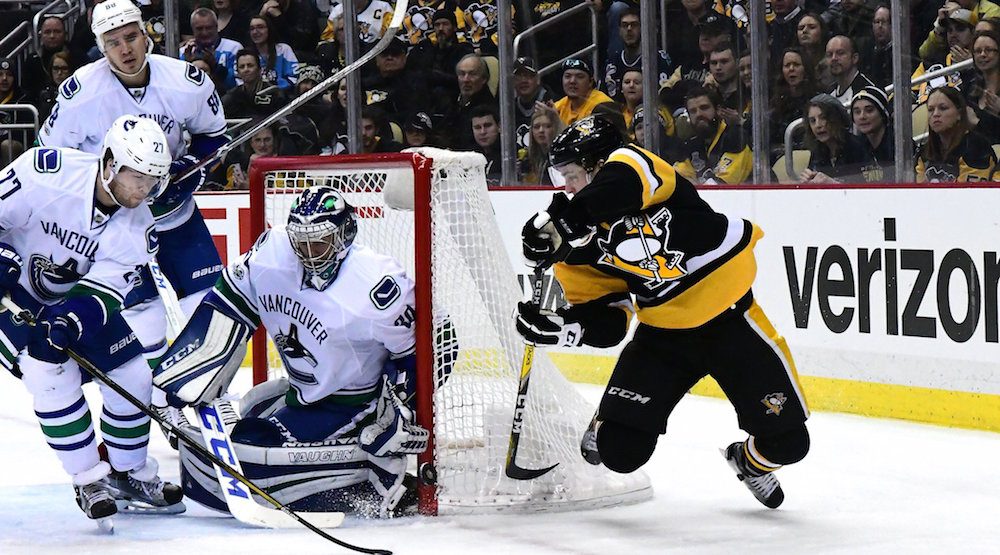 With Horvat and Sutter injured, if you thought Vancouver never had a prayer against the Stanley Cup champs Tuesday, you were sadly proven right.

Through two periods, the Penguins played against Vancouver as if they were their little brother – the way the Canucks used to treat the minnows of the league from 2010-2012.

They let them have the puck and allowed them to skate around and have fun and enjoy themselves a bit.

At the end of the second, Vancouver held the slight edge in shots and it was only 1-0 Penguins. Canucks fans were buoyed by their team’s chances, and a scoreline that was within reach.

Then, when the game mattered, Pittsburgh showed who was boss, outshooting Vancouver 17-11 and scoring three more goals to hammer home the 4-0 win.

Turns out score effects don’t matter when you’re a Stanley Cup contender facing one of the league’s worst teams.

Neither does structure, or a team full of guys who play the “right way”.

What matters? Skill. That’s it.

With the trade deadline coming up, Canucks management would be wise to keep that in mind. Instead of making decisions to squeak out two or five more points in the standings, make moves to turn the team into a contender at some point down the road.

See, skill will help that a lot more than any intangibles you can think of.

I’ll get to the game in a moment but for the next couple of weeks, trade speculation is going to be more important than any two points Vancouver could be fighting for.

During the first intermission, Sportsnet’s John Shannon said Jim Benning and his management group were holding their pro-scout meetings in Pittsburgh. They’d be discussing the future of Jannik Hansen, Alex Burrows and others, he said, to determine if they’d be looking to trade them or not.

John Shannon said if Canucks are out of the playoff race they’ll approach Hansen and Burr to see if they can move them to a contender.

Yes, a year after the biggest disaster of a trade deadline in Canucks history, they’re going down the same path.

Really, how is trading players who help them now for players who might help them become a better team in the future even in question?

They’re not good now, so why would now matter?

If there is another side to the argument – and I’m guessing there is or they wouldn’t be having meetings about this – it must be something about establishing a winning culture, teaching the younger players how to win.

The Canucks went down that path last year, keeping Dan Hamhuis and Radim Vrbata and eventually losing them for nothing. Those wins down the stretch… well, would you rather have them or Patrik Laine on your team right now?

Again, not a difficult choice.

But this isn’t about jumping on the tank train – we’re not there yet. This is about trading players like Burrows and Hansen – guys who could make an impact for contending teams while they’re still good.

Perhaps slightly more difficult because fans love them, but management shouldn’t be making decisions on emotions such as those.

2. The injuries that got us here

Quick recap of the injuries that made this game a nearly impossible challenge before it even began.

Horvat’s shot block at the end of Sunday’s game.

And Sutter falling into the net awkwardly during the second period, where he injured his wrist.

Both were visibly hurt after the game – Horvat was on crutches and Sutter’s wrist was in a brace – so the Canucks’ hope that they’d play against Pittsburgh was just that – a hope.

Putting Sven Baertschi on IR after his concussion enabled them to open up the roster spot that was filled by callup Brendan Gaunce, but when they realized both couldn’t play, Vancouver was left playing Alex Biega as a forward.

Could they have done it differently?

Talking with CBA-expert-in-training Ryan Biech, they could’ve either placed Horvat or Sutter on IR, but the he’d have to stay there for a minimum of four games.

Both were game-time decisions, so that’s a tough call.

Either the game wasn’t all bad for Vancouver, or like I said above, the Penguins just didn’t bother for two periods.

Let’s pretend it was the former for the sake of this section.

Miller was good, and early on he made a stunning save off this one-timer, passed by Sidney Crosby.

Burrows tried to get in the other team’s kitchen for the second game in a row, this time going after Evgeni Malkin.

Markus Granlund hit a post off a great rush with the Sedins.

And Jack Skille had not one but two glorious scoring chances.

Still, if your scoring best chances against the Penguins are coming from Jack Skille, well, you’re probably going to lose 4-0.

On the goals against, Vancouver was not good.

You don’t see it in the gif, but he was standing between Sbisa and Vancouver’s net before Sbisa thought to turn around and attempt to take out his stick. That’s just not a great idea against one of the league’s elite scorers.

2-0: poor Edler was left all alone by Daniel Sedin to defend a give-and-go between Crosby and Guentzel…

Clearly there was no right answer.

3-0: while Malkin’s patience on this pass to Kessel was a true thing of beauty, watching Sbisa here may be even more enjoyable.

He flies into your screen from the left, coming to the rescue, and… well, he might as well have kept going through the other side.

Ah, we’ll give them a break. Everyone had given up by this point.

According to the Valentines Day video from the Canucks, they do a lot better at the other parts of the day, though. This was funny to watch for a few reasons:

1. Does Hutton ever stop laughing?

2. Hutton calling out Sbisa for being “soft” just after the two minute mark is great.

3. Seriously. Does Hutton EVER stop laughing?

Note: Thanks to Ryan Biech for the gifs in this post