There might be an uproar about the kids’ ice time against the Penguins because they didn’t play a lot.

Jared McCann played 10 minutes, Jake Virtanen under seven, so you can see the reason fans might be upset.

But if you look closely, you’ll see there were 26 minutes of minor penalties handed out, meaning anyone not on special teams or playing 4-on-4 was watching from the best seats in the house.

As for how the game went, I’ll let Henrik break it down:

“We had a good first part of the second period and then our last ten (minutes of the game) was good, but in between that we were sitting back too much. We played way too slow to beat them. We were holding on to pucks and not moving the puck quick enough.”

Pretty much nailed it, though he forgot to mention both teams looked comatose in the first… which does explain his not remembering it (he slept through it).

Translation of Henrik’s comments: Vancouver was down 3-0, but scored 2 goals in the last 10 minutes. They almost came back, and if they’d played the entire game with that urgency, they might’ve had a chance. In the end, the Penguins won 3-2.

One more thing on the youngsters’ ice time: McCann did get a shot on the power play in the first period. It lasted 20 seconds and ended with him passing the puck to Evgeni Malkin… and that was the end of the McCann PP experiment for now. (It went 0-5 and definitely could’ve used the skill he displayed in setting up Jannik Hansen’s goal at the end of the game).

1. Enough on this game, more on McDavid and Crosby

I tweeted the following ridiculous idea for tonight’s SixPack during the game:

Sixpack tonight: 1-3 on Crosby not scoring, 4-6 on McDavid’s injury. I’ll have Nick Jensen’s reaction to both. https://t.co/cwiqzhAcWW

This was following a first intermission filled with Sportsnet analysis on Sidney Crosby’s scoring slump.

Apparently the producers read my tweets as the entire second intermission was filled with talk about Connor McDavid’s injury.

They had a good response to Ryan’s question, though.

And Grainne was on fire with her McDavid/Crosby takes all night.

@JustinTrudeau will you fix connor

Not that these aren’t huge stories in the hockey world – they are, and hope I don’t offend anyone by saying an injury to McDavid is bigger news than an injury to Chris Kelly – but there was a game going on they could’ve been talking about too.

But alas, they were determined to talk about Crosby’s slump and McDavid’s injury until either Crosby scored or McDavid healed. Luckily Crosby did what was needed, scoring the Pens’ third goal (not luckily for the Canucks), or we might have been living this nightmare for 2-3 months (McDavid’s predicted recovery time).

Yep, she was on fire.

Trying to get the equalizer in the last few minutes of the game, Daniel Sedin raced into the boards with Kris Letang and took his elbow flush on the face. Daniel stayed on the ice for a few seconds, obviously hurt, before getting up and trying to help his team score for the remaining time.

Turns out Danny had blood flowing out of his nose, yet continued to play despite the pain.

…if you like that story about the Sedins being soft.

Looking at him, you wouldn’t know it was his first game of the season – he was in full playoff mode. 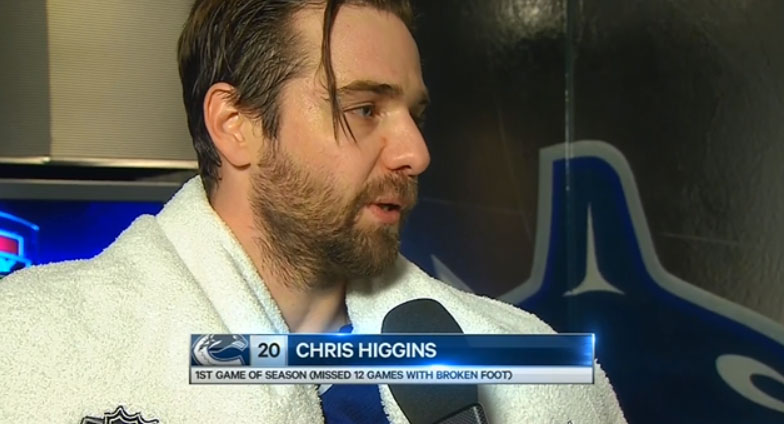 @omarcanuck by not doing shit?

I was referring to his beard… but the reply made me laugh.

Higgins doesn’t get a ton of love anymore in Vancouver. It’s funny, because he was a big part of the Canucks run to the Stanley Cup Final. He’s also versatile like Alex Burrows, but with a little less offence – he can play on almost any line, is strong defensively, can play on the penalty kill and sometimes the power play in a pinch… yet no love.

Wednesday’s game won’t go far in winning his fans back, though. He didn’t win puck battles, he looked tentative, and he wasn’t confident either. His advanced stats agreed – he was near the bottom of the Canucks list.

He also played about 10 minutes – partly an indication from the coach that he was not good, and partly the team easing him back into action.

All of this is what you’d expect from a guy playing his first game of the season.

The fans might give him a break on this one, but it won’t take long before they’re calling for a Higgins scratch in favour of Baertschi.

They may have a case is all I’m saying.

I always thought playing on a crappy team in Toronto was the worst situation a guy like Phil Kessel could be in.

He clearly never enjoyed the spotlight and he doesn’t feel comfortable in front of the camera – so being in the city with the most media attention, and in a place where he had to explain his team’s losses night after night was hardly ideal.

Sometimes I wondered if he even had an attitude problem at all, or if it was all a creation by Toronto’s media.

Then I saw Kessel do this when Evgeni Malkin went offside during Wednesday’s game, and I saw they were probably right all along.

This shot of the Canucks’ enforcer is all you ever need to see to tell you why he texted “Thank you” to Jim Benning when he acquired Brandon Prust this summer.

#Canucks are all decked out in lavender for the warm-up in support of #HockeyFightsCancer pic.twitter.com/ETUjqXNPee

It was for a good cause, as you can see.

For the ceremonial puck drop, they brought out Will Heine and his family. Heine was diagnosed with acute myeloid leukemia in May, and is in remission five months later. 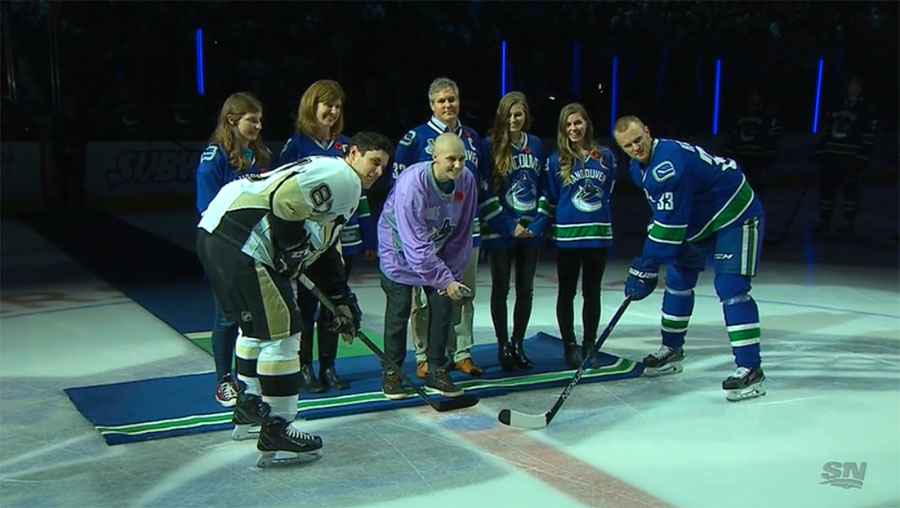 It’s a nice story, and Hockey Fights Cancer is a nice cause, so I thought I’d include it here.