After the Canucks lost a 3-1 lead to the Penguins with 14 minutes left in the game, Vancouver was stunned.

They made Pittsburgh look like a minor league team for two-plus periods. The Canucks looked fast and dominant. The goaltending looked unbeatable.

Yet somehow it all fell apart.

After six goals were scored in the third period, the Canucks lost 5-4 to the Penguins.

And I believe I’ve figured out why.

Hint: Vancouver has only themselves to blame. And injuries. Definitely injuries.

Let’s go in order. Jannik Hansen kicked it off 27 seconds into the game, burning Olli Matta for Vancouver’s first goal.

This was also the moment Vancouver realized they should be fast breaking like Steve Nash/Mike D’Antoni’s Phoenix Suns every time they had a chance.

Both Horvat and Hansen were flying everytime they touched the puck.

Hansen scored again later in the first, this time shorthanded, but again because he and Dorsett burned the Pens with their speed.

Honestly, it looked like the Canucks were playing against their third defensive pair. From last season.

Looking at the chart of shot locations from hockeystats.ca, it was a complete reverse from most Canucks games.

Here’s the chart after two periods. 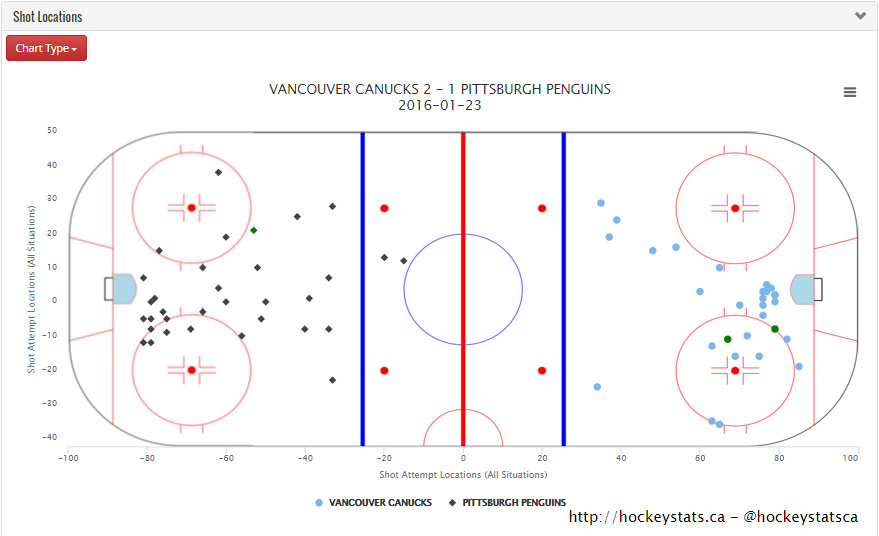 Look at all those shots right in front of Fleury’s net. Were the Pens’ defencemen ghosts? Holograms? Were they jumping out of the way so Fleury wouldn’t have to deal with screened shots?

Either way, this is not how the Canucks have played all season, and you have to think Pittsburgh’s defence was the issue here.

Ryan Miller – with just over half a period left, he was solid, and some of the saves he was making were all-world.

It was like he never left New York, and these crazy people were all over it.

4. How the balloon popped

Pittsburgh’s first goal came on a 5-on-3 power play. Sure, the second call was marginal, and killing a two-man advantage is never easy, but having Sbisa on the ice to kill it? Why?

What a pass by the pizza delivery man.

Edler and Tanev were just out there on the shift prior, so the options weren’t plentiful. Willie went with tired Edler and Sbisa – wouldn’t Hutton have been a better option?

If you thought Sbisa’s play was a gift, check out Linden Vey’s.

When I said the Canucks had only themselves to blame, this is what I was talking about.

It was a 3-0 game without Sbisa and Vey!

Now to those injuries.

Check out their corsi-for percentages – they were playing at the good end of the rink all night. 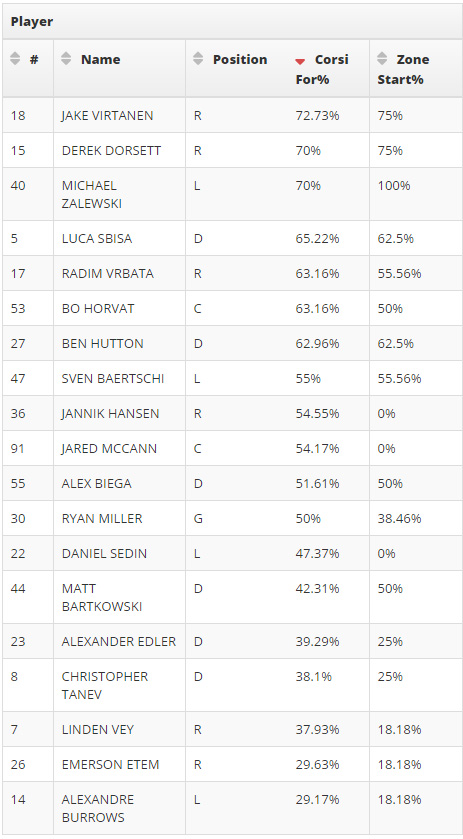 Their play prompted some strong tweets.

Botch suggested the bottom two centers were playing so well they’d leave us questioning who comes out of the lineup.

sutter and henrik are coming back, and soon, who do you take out?

And I made a joke I thought was quite funny at the time.

Yes, Virtanen makes that line look better than it did with Prust, but look at that corsi chart again and notice the zone starts. Dorsett and Virtanen took 75% of their faceoffs in the offensive end, Zalewski took 100%. Meanwhile the entire Sedin, Hansen, McCann line took zero o-zone faceoffs.

Whether the explanation for this is that Willie doesn’t trust Zalewski yet or that Zalewski isn’t great defensively, when your fourth line is getting all the offensive shifts and your top line is taking all the defensive draws it’s not going to lead to success.

Sbisa playing 5-on-3’s, McCann taking only defensive draws – this is why Sutter, Henrik, and Hamhuis returning will make all the difference.

After Hansen scored two goals in the first period, the hat watch was officially on. Actually, some of us might’ve gone a bit overboard.

Hansen wants to get someone a million dollars in Safeway's score and win today. #Canucks

Hansen did finish the hat trick, though it only brought the Canucks to 5-4 with 30 seconds left.

7. Something to laugh about

The Utica Comets are wondering why autocorrect always changes one of our most-used words to “duck” yet couldn’t catch this unfortunate tweet (credit to @GradySas for seeing this).

Greatest typo ever: Chris Higgins took his first dump in a #Comets uniform. Friesen in the next stall over. #Canucks pic.twitter.com/D8GVwRPdsg

Hey, at least they appreciate him down there.

Note: Thanks to the Ryan Biech for delaying his Mucho Burrito run to get me the gifs in this post.