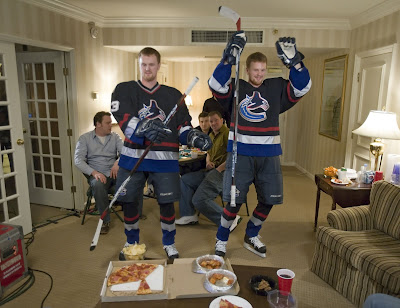 It’s that time of year again. The final games of the NHL season, that either means our beloved team has clinched the playoffs, near-clinching the playoffs, or fighting for their lives to simply make the playoffs. This year, however, has been a blessing for the Canucks. Despite some serious lack-luster performances in recent weeks by our MULTI MULTI million dollar goalie, the Canucks are about to successfully run away with their 3rd Northwest Division title (in the past 4 seasons) if they just receive at least one point from tonight’s match up with the Wild, or if the Avs lose tonight to the Sharks. Tonight, Lui turns 31 years old, and he will start against the Wild. I hope he can deliver.

Ever since the Canucks overtook the Avs with the title lead a few months ago, they havn’t looked back. It’s safe to say the Canucks will remain 3rd place in the Western Division come playoff time. Their possible opponents in the first round? Looks like its either the Nashville Predators, Detroit Red Wings, and the Los Angeles Kings. Personally I’d like to see the Canucks face the Predators first round, the red wings are TOO hot right now and the recent devastating loss to the Kings (8-3) still haunts the Canucks.

Yeah, we know, the band wagon jumpers are jumping on pretty early this year around, but people in Vancity are quite aware of Henrik’s amazing run for the Art Ross Trophy. Sitting at 105points, just 3 points ahead of Ovechkin, Hank can be the first Canuck to win the major award for the franchise. Bless the swede twins, the Canucks would be no where near as good as they are now without them. Though, lets not forget the Canucks’ many current flaws that need to be addressed before the playoffs: their penalty kill (Fix: STOP getting penalties!), Luongo (Fix: give him another game to rest his mind, I’m a firm believer that Lui will steal the show come playoff time) and injuries (Fix: time. Though, we have most of our players back from injury, except offcourse Mitchell whose still suffering from a concussion). Here’s to a long and successful playoffs run for the Canucks! GO CANUCKS GOO!

Newsflash: Calgary Flames just lost to the hawks (wooot!), getting themselves further away from a playoff birth! Fuck the Flames.