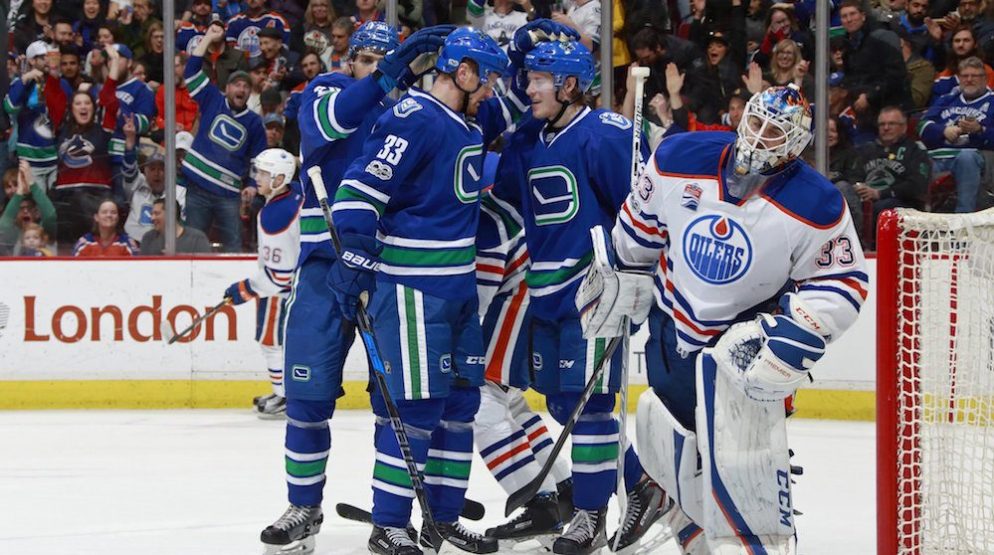 As far as team tank is concerned, this was a perfect game.

They remain 29th in the league, one game away from having the second best lottery odds for a top-three pick.

After this disastrous season, that’s the best thing to hope for at this point.

Two goals, one fight, and no points. Here’s what you need to know from the Canucks final home game of the season.

The Canucks team awards were announced today, and Horvat was the only player to pick up two awards. He rightfully won both MVP and Most Exciting Player. Can’t argue with that.

It’s been a big year for Bo, who just turned 22 on Wednesday. He’s set career highs pretty much across the board. He’s set to be the first player not named Sedin to lead the team in scoring in a decade (though Hank is now just one point back).

We’ve seen a lot from Horvat this season, and tonight we saw a little bit more.

Darnell Nurse is a tough customer, but Bo proved he is too. It was an exciting fight, and according to No. 53 himself, there may be more where that came from.

"It was my first, but probably won't be my last" – Horvat talking about his fight with Nurse#Canucks

If there’s one player fans rooting for losses will still get behind scoring, it’s Brock Boeser.

Tonight, he scored the kind of goal Canucks fans have been wanting to see from the power play all season.

Daniel, to Henrik, to Boeser, to the back of the net. Textbook.

That marks Boeser’s fourth goal in eight games since joining the team. He’s given fans something else to be excited about for next year.

That goal tied the game 1-1 after 40 minutes. The Drive for 29th was very much in jeopardy at that point, but don’t think anyone was mad about that goal.

Not sure what Troy Stecher did to piss off the Oilers, but they seemed to be targeting him tonight.

Saying Troy is small is an understatement, but he’s proven he doesn’t back down from anyone.

Look at how hard he battles with Milan Lucic of all people, before getting hit in the face by his stick after a shot. The Oilers also scored the GWG on the play.

Stecher got stitched up, and came back with two minutes left to finish the game.

Willie had high praise for Stecher afterwards, talking about how well he’s battled through adversity this season. It’s part of the reason he won the Walter Pratt award as the best defenceman on the team.

Outside of the ones already mentioned, the other two went to Markus Granlund as the Unsung Hero and Ryan Miller for the most ‘3 Stars’ appearances. All well deserved.

Stick tap to Rob, who went a perfect 4/4 on his predictions.

When was the last time the Canucks awards didn’t feature a Sedin?

The captain was pretty candid in his post-game interview.

"We haven't scored enough and tonight that was it again. That's on me & Danny and that's why we've lost a lot of games this year" – H. Sedin

It’s hard to face the reality that the Sedins have been part of the problem this season. After all, they’ve been the heart and soul of this team for over a decade.

Henrik has five points in his last two games, but that’s also five in his last nine games. It seems the days of the Sedins producing virtually every game are gone.

The kids need to shoulder much of the load.

6. No points, no problem

With one game left in the season, the Canucks remain the second-worst team in the NHL with 69 points. 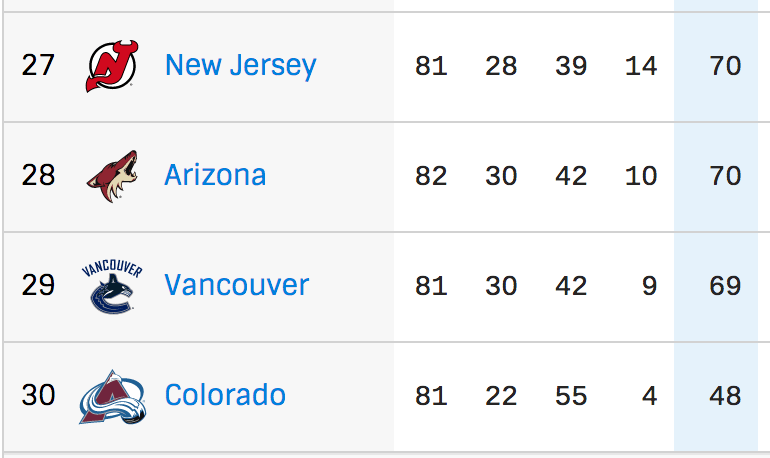 Had they picked up even a single point, the Canucks would have leaped ahead of both Arizona and New Jersey tonight.

Not only that, they’d also fall behind Las Vegas in the draft lottery odds as well, since they have the equivalent odds to the third-worst team.

The Canucks chance at a top-three pick would fall nearly 10%, a pretty significant drop.

They did their part tonight with a 3-2 regulation loss.

Game 82 goes tomorrow at Rogers Place in Edmonton. Another regulation loss completes the Drive for 29th.