The season from hell is finally over. Vancouver went from a 100-point team to the biggest player at the trade deadline to neither of the above.

One nice thing happened before game 82 – Columbus won, meaning Vancouver was locked into 28th place in the league and fans could cheer for one last win.

They did, but more than that, they cheered for Alex Burrows in what could be his last game as a Canuck.

So when Burrows scored in the shootout and Vancouver won 4-3, it was perfect. (We’ll ignore that Etem tried to steal Burr’s thunder by scoring the SO winner).

And because this is the last SixPack of the season, let’s ignore that it’s meant to be six points and end the season with a bang.

HNIC’s Elliotte Friedman set the tone for the night before the game began:

“In Gillis’ first year in Vancouver, they lost nine games in a row and people were calling for Alain Vigneault to be fired. They had meetings with all the players to talk about what was going right or wrong.

“They said to Burrows, you’ve played well, you should be satisfied. You know what Burrows response was? It was, ‘Satisfaction leads to regret.’ I always loved that line.

“This guy gave his heart to the franchise. If this is his last game, I hope he goes out great.”

Burrows playing on the Sedins’ line was a pretty good sign of the team’s plans going forward – it was one last chance for fans to see the winger who had the most success with the twins over the years.

The Sedins wanted him to score too. This was early in the first period.

Fans would’ve likely cheered him at the end of the game regardless, but when the Oilers tied up the game with just over a minute to go, it allowed magic to happen.

One last goal for Burrows with the Canucks, one last arrow for Luc Bourdon. It couldn’t have been more perfect.

He enjoyed the win cheering on his teammates as he did so many times over the years.

#Canucks Alex Burrows says he feels he can mentor younger players, that he can still contribute. But understands business side, too.

Burrows was in good spirits in the locker-room. Even took a dig at Luongo: “I could throw a Loo quote and say ‘my contract sucks.'” #Canucks

So are his fans ready to move on? 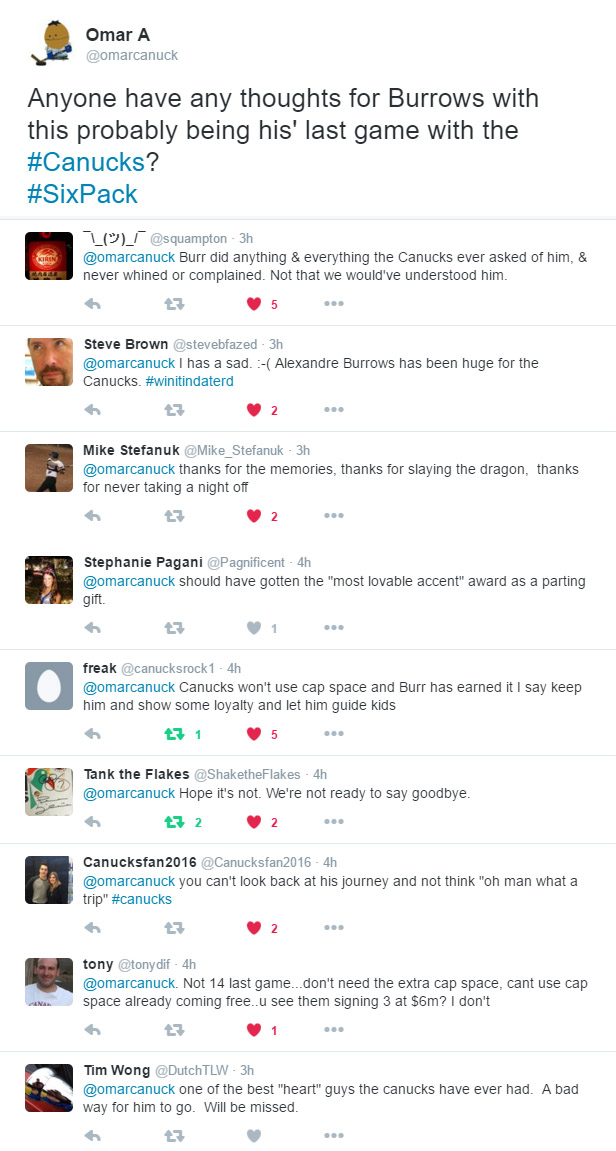 Not ready to move on, no.

One last thought on – don’t try to find pictures of Burrows without a shirt on.

I appreciate the thought.

2. Shout out to Hamhuis

@omarcanuck say a few words on how awesome Hammer is

Hamhuis’ time with the Canucks may be up too… but I’m not sure “a few words” does him justice.

Out of all Vancouver’s injuries during their 2011 run, Hamhuis probably had the greatest impact. He was the team’s steadiest, most well-rounded defenceman then, and three years later he was still good enough to play on Team Canada.

He started this season looking like he lost a step, but after being returning from a serious jaw injury, he played some of his best hockey with the team, devouring huge minutes, and looking as offensively capable as he did five years ago.

If he is done as a Canuck, he probably won’t get it because of his quiet nature, but he deserves nearly as much fanfare as Burrows.

OK, as hard as it is, at some point we do have to start thinking about next year. I’m not saying that’s now – there’s plenty of time. But when you’re ready, here are some things to ponder.

First, who will be the starter next year?

Markstrom was amazing in the last game of the season.

Hard to believe one year ago everyone was still questioning if he could play at the NHL level.

Needless to say most fans want him to be number one next season. Seen, on the other hand… well, he was being Seen.

@omarcanuck miller will be markstrom will play more though

You have to give Tryamkin credit. After trying to stop McDavid by lying on top of him five days ago, he was trying new solutions Saturday.

Not saying it worked, but he was trying.

First he tried to tackle him from behind. (Not sure if Tryamkin thinks himself invisible or what, but he’s not exactly making the ref’s job hard)

Second, he tried a more direct approach with Hutton’s help.

The more I watch this, the more it makes me laugh. I know it must be hard to stop him, but how can they possibly think the sandwich takedown will not be detected?

Hutton’s expression after the hit: 😀

Anyway, looking forward to watching Tryamkin refine this next season.

While Tryamkin’s defence should definitely excite fans, he’s still a few seasons away from dominance.

After spending a year with the team, Hutton’s a lot closer. In fact, he was voted by fans as Vancouver’s best defenceman.

Not sure about that. Most entertaining defenceman, sure. (Barbie Girl)

With plays like this on Maroon, he still has some learning to do.

Hutton’s expression after the play: 😀

As long as we’re focused on the blueline, don’t forget this guy.

That’s Bartkowski, who should’ve covered the player coming around the net, who you can actually see glance over and not move towards Draisaitl…

One more thing on Bart… 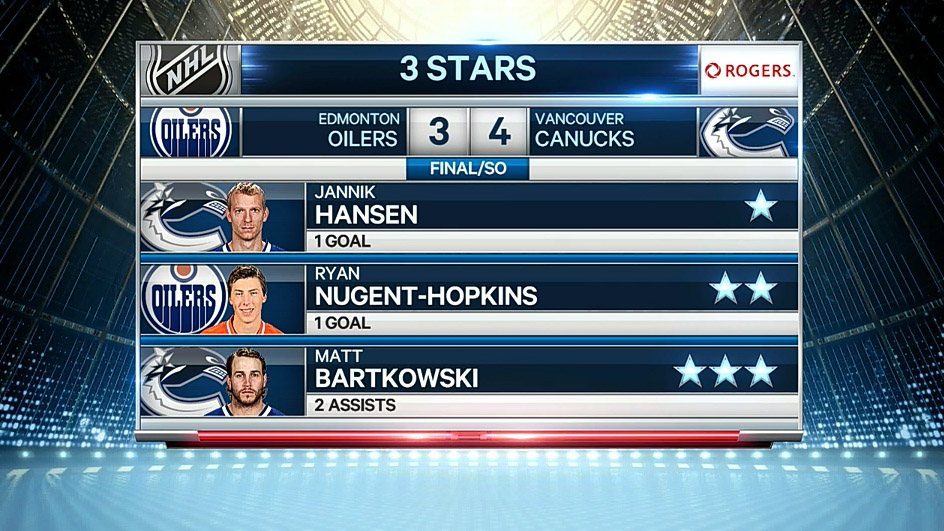 Maybe he is, I’m not great at scouting quality of scrumming…

Marc Crawford made an appearance on HNIC and he talked about Auston Matthews, the player he’s coached all year in Zurich who’s expected to be this year’s first overall draft pick. Crawford compared Matthews to McDavid, Kopitar and Sakic… so, uh, he’s pretty good.

Could he land in Vancouver?

That’s it. It’s all over. The Canucks finished with 75 points, third last in the league.

Thoughts from the captain?

Henrik when asked if he was happy to end the season with a win – “I’m happy it’s over.” #Canucks

We are too, Hank.

And on behalf of Wyatt, Rob, Steve, Ryan and everyone else who’s worked on this year’s SixPacks, thanks for reading and following along.

We had more fun than Henrik, I promise.