How would Vancouver follow up their first three-game winning streak of the season?

If you thought the Oilers would be a cakewalk after taking on and beating the California gauntlet, you were wrong.

But I’m sure you didn’t think that.

No Canucks fan with half a brain would take any opponent lightly this season.

Sure they beat Anaheim, San Jose, and L.A, but they were outshot 112-78 in those three games. Those wins were more goaltending than anything else, and against the Oilers Wednesday, they didn’t have that.

Vancouver was outshot 38-27. Markstrom didn’t have his best game, but he wasn’t the biggest culprit in their loss.

The Canucks had four power plays and they managed zero shots on net in the first three. A big part of that was that you wouldn’t know the Sedins played if your eyeballs were glued to the game.

Not that you should blame the Sedins – this was an exhibition game to them. Better they get to the off-season without any major injuries, so they can recover and start training for next year.

How did Canucks fans feel about the 6-2 loss?

The score wasn’t quite right, but TeamTank will be happy nonetheless.

Horvat is quietly having a dominant end to the season. He has five points in their last four games – three of them goals.

Pretty sure I included a gif of this exact move in a SixPack last week, can’t remember which team it was against.

One thing to look forward to next season – Horvat having a more offensive role and pulling more moves like this once Sutter’s back to take over the checking centre position.

The only obstacle: Willie thinks Horvat’s better in a defensive role…

For Vancouver, there wasn’t much in this game. Dorsett making himself vs. Hall look like Tryamkin vs. any human made the cut.

tied for #Canucks lead in goals from defensemen: Matt Bartkowski (6)

The worry? Bartkowski’s been gifted huge minutes all season, despite being this year’s Luca Sbisa. Will his team-leading goals by a defenceman be enough to convince Benning to re-sign him?

I hear you saying it wouldn’t be logical. Neither was locking up Sbisa a year early, or giving him a big raise.

And if they do re-sign him who gets risked on waivers next season? Pedan?

Emerson Etem is playing on the Canucks second line, and he’s getting all sorts of leash from Willie/Benning.

This is how he rewarded the team Wednesday.

The worry? Saying this team has been patient with Benning’s “projects” would be an understatement.

Is Etem coming back? Will he go straight onto the power play?

The SixPack wouldn’t be much these days without Tryamkin.

First, another beautiful pokecheck, followed by a breakout pass few Canucks defencemen have the skill to make.

Second, he made “tough guy” Patrick Maroon think twice about ever touching him again.

And third, he tried a new tactic for eliminating a McDavid scoring chance…

He tried to make him disappear. It worked for a split second too.

Moving on, Twitter had some funny takes when the Canucks announced Tryamkin will be heading back to Russia to be married this summer. 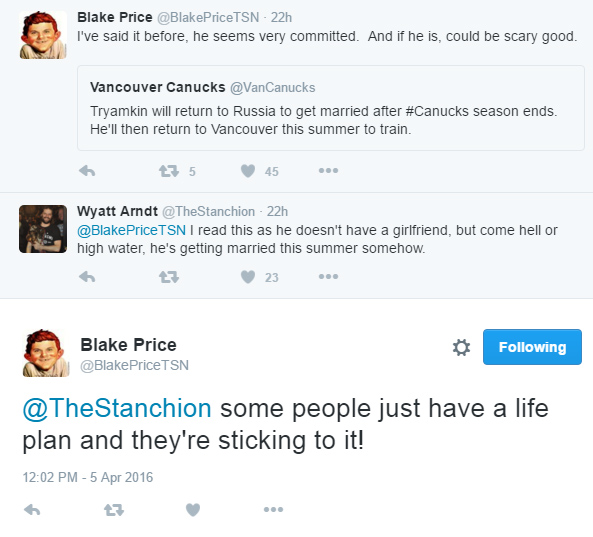 Thanks to some intrepid redditors, I found out Tryamkin’s fiance is real, and the couple has some cute pictures on Instagram. 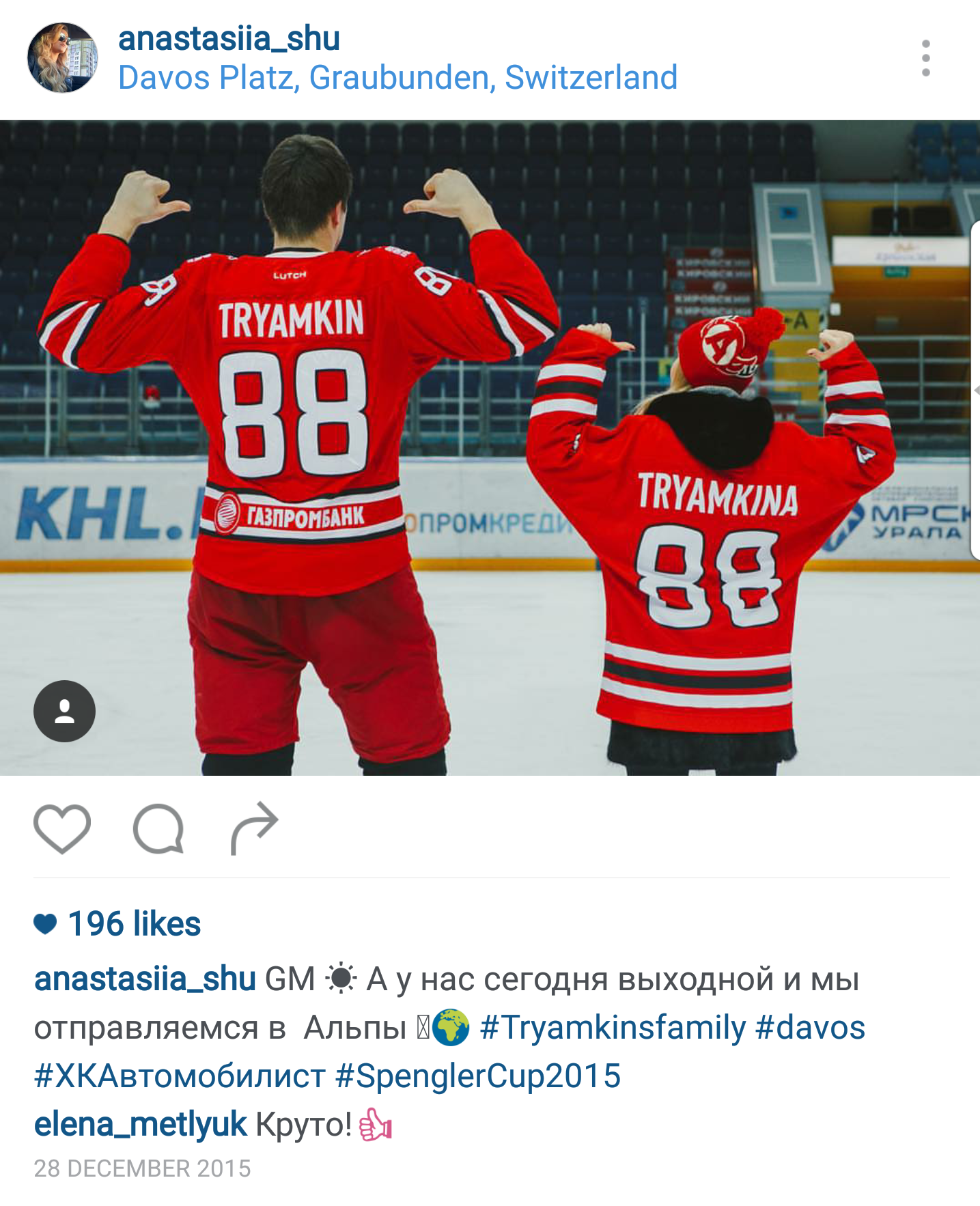 Looks like a Timbits hockey player next to an adult, no?

Also, it’s starting to make sense why he’d rush back to put a ring on it, before spending anymore time apart. 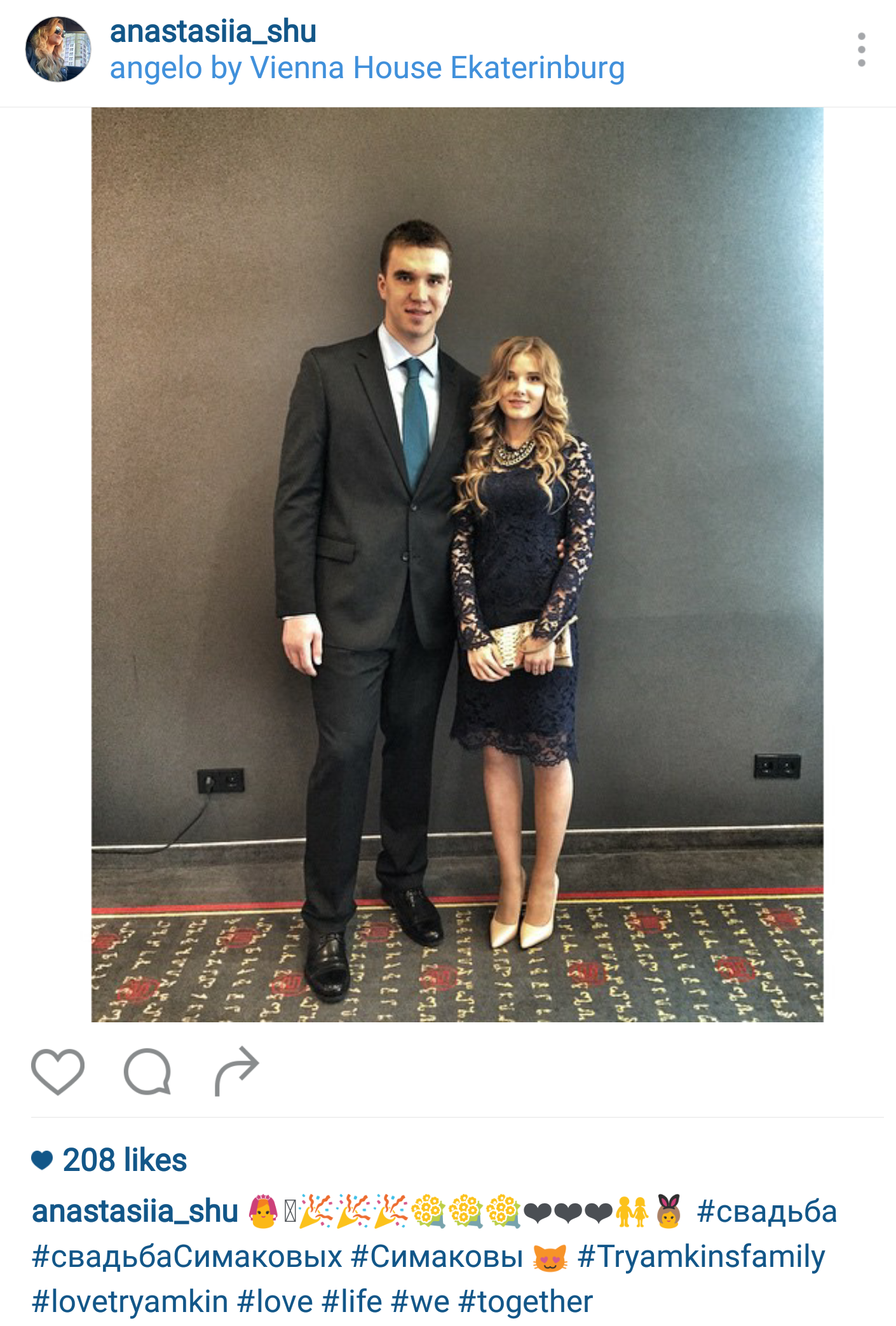 She’s probably quite tall. Doesn’t look it next to Hagrid’s brother, though.

Tired of cheering for your team to lose? Frustrated with those who are cheering against the team?

Shane Doan might have the best solution to the tanking epidemic that’s taken over the NHL in the past few years.

He spoke with AZ Central a few days ago, and proposed this brilliant idea.

“The day you’re mathematically eliminated, you start accumulating points,” Doan said. “When you get to the end of the year, whoever’s accumulated the most points gets the first overall pick.”

One reason it’s better than any other idea we’ve heard so far: the first team eliminated from the playoffs has the best opportunity to gain lottery points.

Another reason we like this idea: media members will stop asking everyone from Henrik Sedin to Jim Benning if they’d rather tank or win.

Nothing worse than hearing someone paid to perform (AKA win) have to justify winning.

7. Best idea of the night

Do this, Canucks fans:

I hope Burr gets an ovation on Saturday since it will most likely be his last game as a Canuck. Future ROH member.

No current Canuck deserves it more, no Canuck has worked harder for it, and no one on this team has bled blue, green, red, maroon, orange, black, yellow, and salmon more.

Note: thanks to gif/prospects-expert Ryan Biech for his help with the gifs in this post