Canucks nation was abuzz on Saturday morning with the dreams of a top three pick still alive.

That came to a sudden thud shortly after 5 p.m., as it was revealed that the Canucks would end up selecting 5th overall, with the Winnipeg Jets and Columbus Blue Jackets, through a lottery victory, leapfrogging the Canucks.

After a tumultuous season, a lottery pick for the Canucks represented hope and promise for the future.

Luckily, that isn’t lost with the 5th overall pick.

The Canucks are going to get a very good player that could be a big part of their future. The players that will be available will likely take a few years to make an impact in Vancouver, but they all have the skill-set to make a name for themselves.

Let’s take a look at three players that the Canucks will likely be looking at in the first round of the 2016 NHL Entry Draft in Buffalo this June. 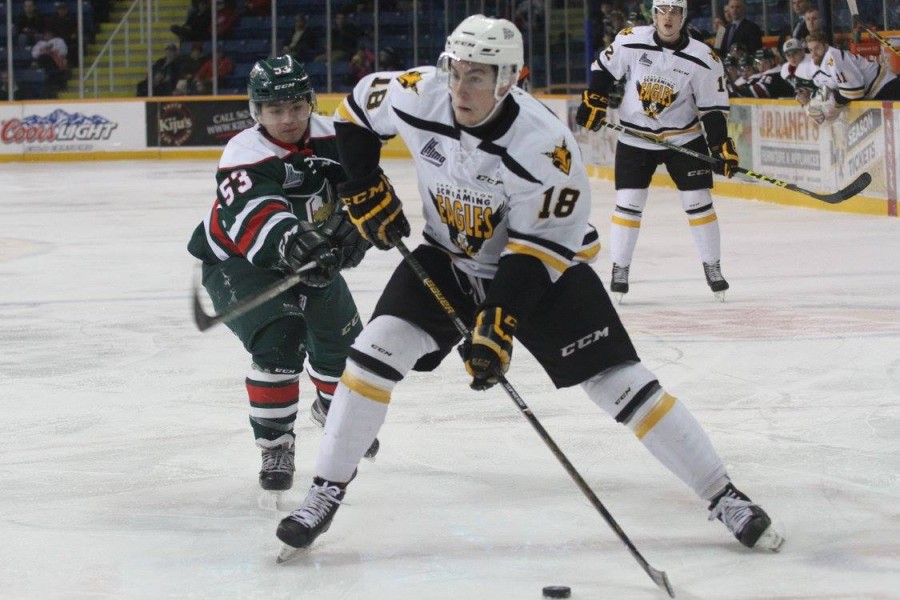 Pierre-Luc Dubois shot up the draft rankings during the second half of the season, ending the year as the number one ranked North American skater by NHL Central Scouting. After playing mostly as a left winger, Dubois was moved to centre this season and likely saw his stock rise in the draft rankings due to showing that he can be a force in all three zones.

Pierre-Luc Dubois is an exceptionally well rounded prospect that should have scouts drooling heading into the 2016 NHL Entry Draft. Big and strong, Dubois is also an excellent skater, agile and possessing plus two step quickness, that is equally capable of setting up dangerous scoring plays or burying the puck himself. He combines the ability to protect the puck with a quick and accurate release to create havoc in the offensive zone every time he touches the puck. Possessing elite on-ice vision and hockey sense, Dubois is a complete 200 ft player that that can out muscle even the strongest of opponents for loose pucks. Dubois is extremely versatile as he can play anywhere at forward, including excelling at winning draws when pushed into the middle, and can bully his way through traffic or along the boards. He currently has the penchant for taking too many minor penalties but much of that is due to his ability to dominate the opposition physically at the junior ranks.

Given that Dubois already has an NHL-ready frame, measuring in at 6’3″ and 205 lbs, and the fact that he can play centre or left wing, you can understand why teams are salivating at the chance to draft him, with the Canucks being one of those teams. Drafting a player who has the skill-set to possibly develop into a first line centre doesn’t happen very often.

There is a very good chance that Dubois will be taken with the fourth overall pick – before the Canucks take the podium – but the thought of Dubois centring a line with 2015 first round pick Brock Boeser in the future sounds like a fantastic dream. 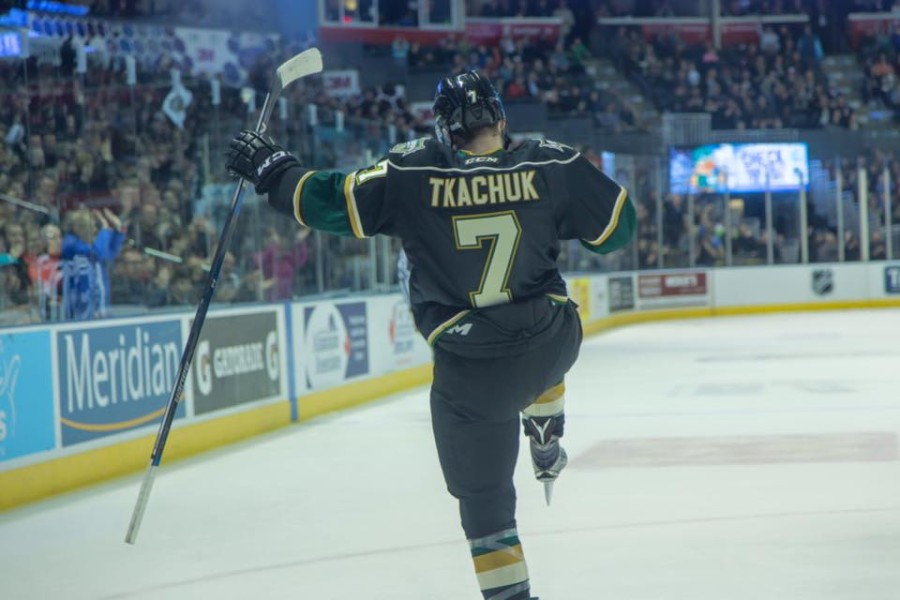 Matthew Tkachuk was the consensus 4th ranked prospect for most of the year before Dubois snatched that title in the final rankings.

The son of 19-year NHL veteran Keith Tkachuk, Matthew appears to be a on track to being an agitating but also offensive minded NHL forward. Playing left wing for the London Knights, Tkachuk put up 107 points (30-77-107) in 57 games during the regular season and has followed that up with 33 points (16-17-33) in 14 playoff games.

A multi-dimensional energy winger that plays a pro-style, adaptive game. Well-versed as a guy who can consistently put up points, but also as an agitator who plays with a little bit of bite and nastiness. Skates with excellent balance and speed, outclassing many in his age range. No lack of offensive instincts and knows how to score in many different ways. Confidence in his abilities and playing to the extent of his capabilities strengthens his work ethic and creativity. All-in-all, a unique and effective forward who defines his own limits and seeks to exceed them, along with all on-ice expectations.

There are some concerns that Tkachuk is benefitting from playing with two great junior players in Mitch Marner and Christian Dvorak, which is fair to some degree as his secondary assists made up a large portion of his points this season. But the St Louis, Missouri native showed well at the World Juniors in December and has been excellent in the OHL playoffs so far. 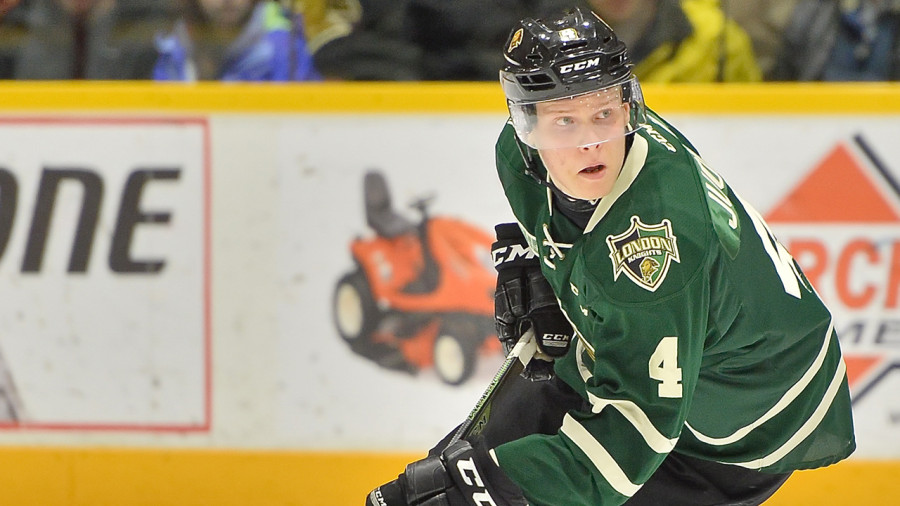 If the Canucks feel that selecting a defenceman in the first round is the prudent thing to do, then look no further than Matthew Tkachuk’s Finnish teammate, Olli Juolevi. There is an obvious need in the Canucks prospect pool for an impact defenceman and Juolevi fits that bill.

Craig Button from TSN praises Juolevi in a scouting report from March:

Olli Juolevi (#7) of the London Knights is an incredibly competent player who makes the game look easy in all areas. He makes the essential and key plays at every turn. He shows mastery of his position under the most challenging of circumstances, and his poise, calm and assuredness are the stuff of pillar-type defencemen.

He was the horse on the backend as a 17-year-old in what is usually regarded as an 19-year-old tournament.

Like Tkachuk, he has been terrific for London in the OHL playoffs with 11 points (2-9-11) in 14 games. If the Canucks feel that addressing the organizational need over the best player available is the thing to do, then Juolevi is the best option available.

He could develop into a minute-eating #2 defenceman who plays in all situations.

The wild card in this whole situation is that the Edmonton Oilers currently hold the 4th overall pick. They are currently stacked at centre with Connor McDavid, Ryan Nugent Hopkins, and Leon Draisaitl, so they may not want to select Dubois and go in a different direction.

That may be taking Tkachuk to shore up their left wing depth, taking a defenceman like Juolevi, or possibly trading down for immediate help. If they do trade down, the team moving up may have their eyes on taking Dubois before the Canucks are able to.

There is no question that the Oilers decision will affect the Canucks direction on draft day.

That is obviously looking well into the future, but it’s clear how Dubois would fit in.

GM Jim Benning was on TSN 1040 on Monday morning, and suggested the Canucks will take one of the two forwards:

If Dubois is selected with the 4th overall pick, and the Canucks remain in the 5th overall slot, I would expect the Canucks to take Matthew Tkachuk and then try to address their defensive depth with their later picks.