The Canucks introduced something completely random last week, and I love it.

Ladies and gentlemen, the Fanboni:

During the 1st intermission of Sunday’s Canucks game, our editor-in-chief Farhan Mohamed and I got to take it for a spin.

The reaction on Twitter was a mix of confusion and delight.

Look, I don’t know why I like this so much. All I know is that a moving organ that shoots out t-shirts brings a smile to my face. 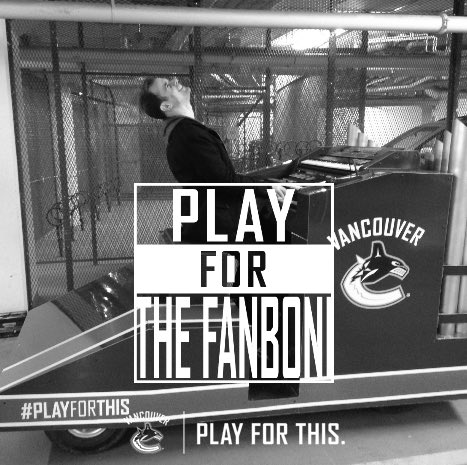 For now it’s undecided whether the Fanboni will be used on the ice or just on the concourse outside of Rogers Arena, as it was this weekend.

Personally, I can’t get enough of it. Get it on the seawall on game days and down Granville Street after wins.

Better yet, let Canucks parody song superstars Marie Hui and Arielle Tuliao ride with Vancouver’s favourite keyboardist, our own Clay Imoo. I’m certain Clay can come up with a Fanboni song (what rhymes with Fanboni?).

We can all use a little more randomness in our life, can’t we?