You didn’t want the Canucks to make the playoffs anyways, did you?

Hopefully not, because after the Canucks lost again last night, 5-2 to the Minnesota Wild on home ice, things are looking bleak. It was their fifth loss at home in a row, the fourth coming against a non-playoff team.

Canucks management has stated the importance of making the playoffs, while integrating young talent, over and over again.

Dan Hamhuis said much of the same yesterday as well.

"There's nothing better for a young player's development than playing in playoffs." Hammer talks winning attitude.https://t.co/0gmF8DARDx

Wait, before we continue… 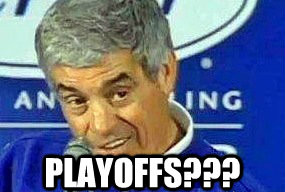 Canucks management has said they want to make the playoffs and I take their word for it. But really, at this point, that would be a terrible thing to happen to the franchise.

Let’s look at the facts.

Through 56 games, a fairly large sample size, we should have a pretty good handle on the 2015-16 Vancouver Canucks. They’re 22-22-12, good enough for 23rd out of 30 NHL teams. They’re 6 points out of a playoff spot. They’re also 7 points out from last place in the entire league.

If those numbers didn’t depress you, I’ve got some more.

The Canucks have a goal differential of -24, good for 4th worst in the league (only Edmonton, Toronto, and Columbus are worse). They score 2.30 goals per game, only New Jersey has fewer. Their power play clicks at a 16.9% pace, good for 24th place. They average 28.7 shots on goal per game, tying them for 6th worst in that category.

What about the underlying numbers? They’re bad too.

Their shot attempt differential at 5-on-5 is 4th worst in the league.

My point? This team isn’t good. They’re not going to find magic in a bottle, not this year, and even if they do, it’ll be an illusion.

It’s not worth making the playoffs this year. It’s not what’s best for the long-term success of the franchise.

It’s sort of like buying a new sports car when you’re struggling to pay your rent. Sure, it’ll be fun and it’ll feel good in the moment, but eventually it’ll catch up to you because you can’t afford it.

The fun and anticipation of playoff hockey, as fun as it can be, won’t be worth it.

And that’s why the best thing for the Canucks is to tank the rest of the season.

The players won’t tank, of course, they’re too proud and they have to play hard to keep their job. The coaches can’t tank either, their jobs are on the line. But management? Ownership? They are entrusted with keeping a long-term vision in mind.

The Canucks have an opportunity to sink as low as they can in the standings by trading away old players who are past their prime, but still have value on the market.

GM Jim Benning would be well served to cash in on Dan Hamhuis, Radim Vrbata, and if he has value, Alex Burrows. Hamhuis and Burrows have no-trade clauses, while Vrbata has a limited no-trade clause. But as we’ve seen with Kevin Bieksa and Jason Garrison, NTCs are not immovable.

Trade them for draft picks and/or young players. That would help sink the Canucks in the standings and give them the best shot to rebuild, and rebuild fast.

And that’s it! One last tank job, hopefully it gives you a player to build your team around.

Here is a table that shows the probability of each draft position, depending on where a team finishes in the standings (thanks to stats wiz @Sir_Earl for running the numbers). The NHL draft lottery will decide the first, second, and third selection this year. 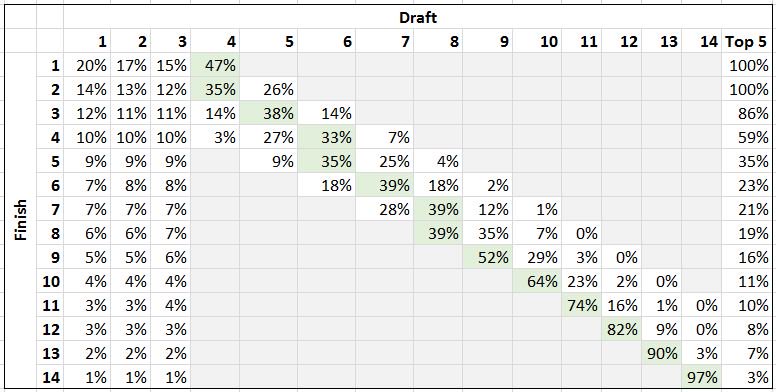 Of course, the worse you finish, the better chance you have to claim the big prize (Auston Matthews).

The Canucks don’t need to be the Edmonton Oilers of the last 10 years. They don’t have to be that bad. Just be bad right now. Just be bad for the next 26 games.

Position yourself for the best possible draft pick and hopefully something good will happen. If you’re lucky, you’ll get Auston Matthews.

After 46 years without a Stanley Cup, the Canucks are due for some good luck.