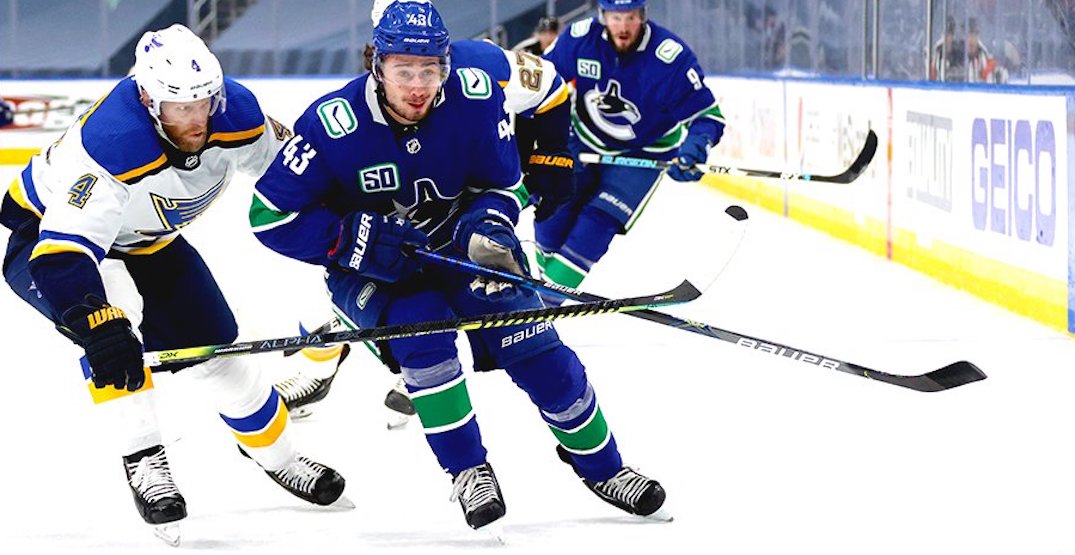 We’ve got a series.

The Vancouver Canucks were close to taking a 3-0 series lead against the defending Stanley Cup champs, but Brayden Schenn scored in overtime to win 3-2 in Game 3 and give the St. Louis Blues life.

The Canucks kept pace in the first two periods but the Blues seemed to take control in the later stages of the game, likely feeling the pressure of potentially going down 3-0 in the series.

The Canucks’ power play has been the best in the NHL playoffs so far, and they converted once again to open the scoring in the second period of Game 3.

Pettersson goes cross-ice to Miller who rips a shot on the break to open the scoring #Canucks #STLBlues pic.twitter.com/oWonS19bSa

Elias Pettersson started the play with a tape-to-tape pass to JT Miller, who skated in and scored over the glove of Jake Allen.

The Blues scored twice to take the lead for the first time in the series, but Pettersson tied it 37 seconds later.

Pettersson took advantage of a miscue by the Blues in their own zone and ripped a perfect shot top corner.

Jacob Markstrom had another strong 46-save performance, and was particularly sharp in the third period and overtime where he made several big saves to keep the Canucks in the game.

Jordie Benn got into playoff action for the first time, replacing the injured Tyler Myers and playing his off-side on a pair with Oscar Fantenberg. He played 18:42 and looked to be able to keep up to the pace, which is a good sign if Myers ends up missing more time.

Pettersson had two points and six shots while Quinn Hughes had an assist and five shots. Both players moved into a tie with Sebastian Aho for the NHL playoff scoring lead with nine points.

The Canucks are right back in action on Monday for Game 4 at 7:30 pm.