Seeing the Canucks won by a 2-1 score would lead you to draw a few conclusions.

You’d think their goalie was probably the story.

You’d likely think they had a clutch performance by the Sedins or whoever scored the go-ahead goal.

Or you might think they played a strong defensive game.

While those were all true, you wouldn’t think the penalties and referees would be the main talking point after the game.

The Canucks took 29 minutes of penalties against the Lightning Tuesday and they gave Tampa Bay 10 chances on the power play. That’s nearly a full period of time on the penalty kill.

And you can be happy because Tuesday’s game ends the age-old debate: “Which is better – carving up the ice in my crease or waving sniffing salts in front of my face?”

Don’t laugh, this probably is an age-old debate for goalies. They’re weird.

Shots were 27-19 Lightning. Markstrom allowed one goal and posted a .961 save percentage. Tough to know which was his best save because they became a bit of a blur when the entire last period was played on the PK (that’s what it felt like anyway), but this one is in the running.

Not amazed? Keep in mind the shooter was Steven Stamkos.

Daniel Sedin had some nice words for his goalie after the game: “The PK was good because (Markstrom’s) good. That’s the bottom line.”

2. Let’s talk about the refs

The refs were like that kid in elementary school who just wanted attention. If it was for doing something bad, so be it. You don’t hand out 40 minutes of penalties and not want to be the centre of attention, do you?

Check out the games’ shots chart, and you can see the refs’ impact. 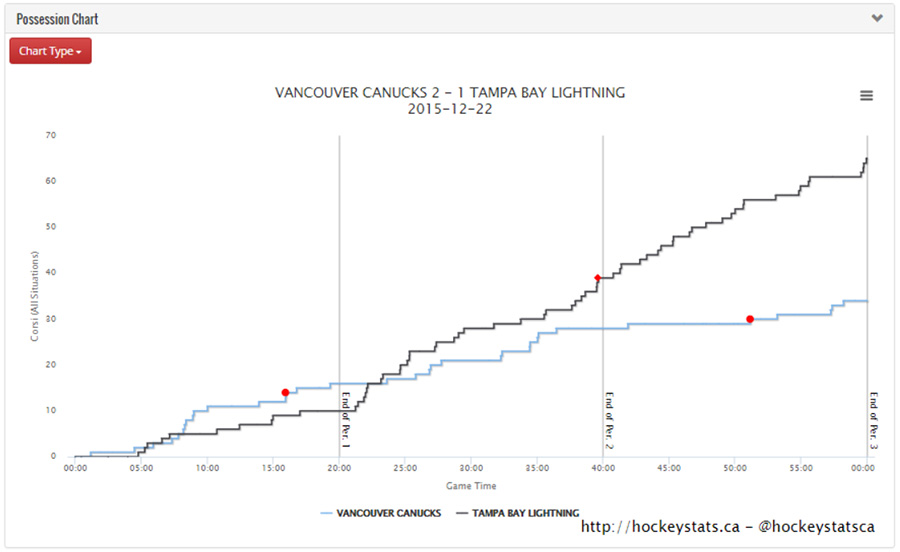 Fans were a little agitated, you could say.

@omarcanuck nhl wants to give them matthews

With less than two minutes left, the Canucks took a too many men penalty. That was a tough one.

I think too many men against the Canucks is the only penalty that hasn’t been called. It had to be callled.

But wait, said Daniel: “I think we deserved every penalty tonight. We’ve gotta stay off the referees.”

Willie agreed, mostly: “We took some bad penalties tonight we didn’t need to take. There was a couple that could’ve gone the other way.

“The last one, we had too many men on the ice, there’s nothing they could do about that…

“There was a couple we disagreed with… Overall we hurt ourselves probably more than the refs hurt us.”

Guess Willie and Daniel didn’t want to be hit with a fine before Christmas, because that was some one sided reffing.

The Canucks won, and you’ll never guess who scored the first goal and is on a three-game goal-scoring streak.

Willie on the goal: “He went to the net hard. Early in the year he wouldn’t have stopped there, he would’ve turned away. Now he’s stopping and he’s getting rewarded for it.”

Before moving on, notice Horvat’s play to start the breakout from his own end. For three games, Horvat’s been one of the Canucks best players, and he continued it Tuesday. By the end of the game, his ES corsi numbers were second amongst Vancouver’s forwards, behind only Radim Vrbata’s (from hockeystats.ca).

He led all Canucks forwards in PK time too, with a ridiculous 9:19 played. Guess the “Whovat” nickname won’t stick.

4. How good will Hutton be?

On a night when the Canucks spent most of the night in their own end, Ben Hutton and Yannick Weber came out of it looking… okay.

Which is a massive victory.

Considering Biega, Bartkowski, Tanev and Edler had ES corsi numbers of minus-14, minus-12, minus-7, and minus-3 respectively, Hutton’s zero and Weber’s plus-1 were incredible.

Don’t get me wrong, this isn’t an indictment of the other defencemen. Tanev and Edler played the big shifts and killed penalties, so there’s a reason their stats look like this. But Hutton showed signs of brilliance.

Here he is stickhandling the puck out of harm’s way during the first.

And here he was with a turnover-turned-breakout in the second.

This was the one that really caught my attention. The way he turned the puck over and fast-broke down the ice – that’s the kind of thing that gets Erik Karlsson so much love from smart hockey analysts like Thomas Drance and Dimitri Filipovic.

Hutton has a bit of Karlsson in him? You heard it here first.

After Sunday’s game I reserved a spot for some optimism about the Canucks in the future. Want more? Check out this video of Brock Boeser highlights from the first half of the season.

If you don’t have five minutes to watch it, go straight to the 2:33 mark. While most of the video shows Boeser’s goals (he’s a legit sniper), this one shows his incredible passing abilities. He’s wearing #16, FYI.

This guy on Reddit (possibly Linden, Benning or Weisbrod?) is a believer.

More exciting: we’ll probably get to watch Boeser playing for Team USA during the World Junior Championships in just a few days.

But speaking during the intermission, Sportsnet’s John Shannon said he predicts Boeser will play another year in college, so the hype-train may have to wait.

Something to consider, though… 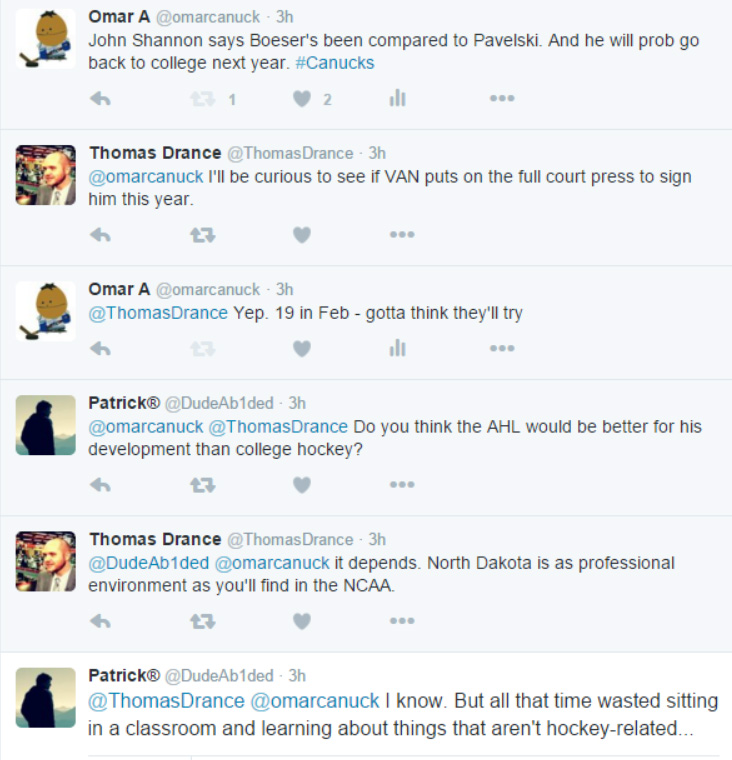 6. Gallagher’s ‘Twas the Night before Christmas

Not quite in holiday mode yet? Feeling more stressed than excited about all the Christmas gifts?

This poem, recited by Tony Gallagher on TSN 1040, will lighten the mood.

(BTW, it’s not really the Gman)

Now, I’m going out of town for 10 days, so I’ll leave you in the capable hands of Wyatt and Steve.

Enjoy the holidays and your loved ones Canucks fans.