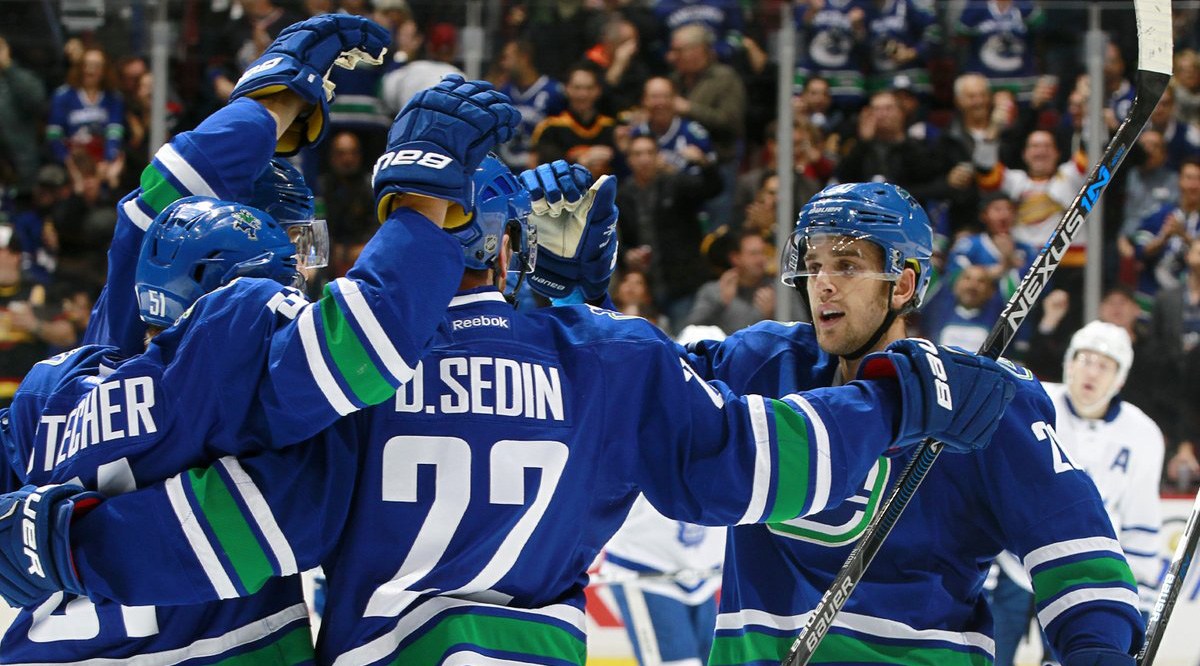 If you came to the Vancouver-Toronto game for entertainment, you weren’t disappointed on Saturday.

Gudbranson fought Martin, Kadri played like a weasel, and the game had to go to a shootout before Vancouver won 3-2.

Don’t be deceived by that score – the Canucks were not better than the Leafs.

Their power play was weaker than Philip Larsen along the boards, and as usual, many lineup decisions had Canucks fans like this.

Even strength shot attempts were 49-33 for Toronto. 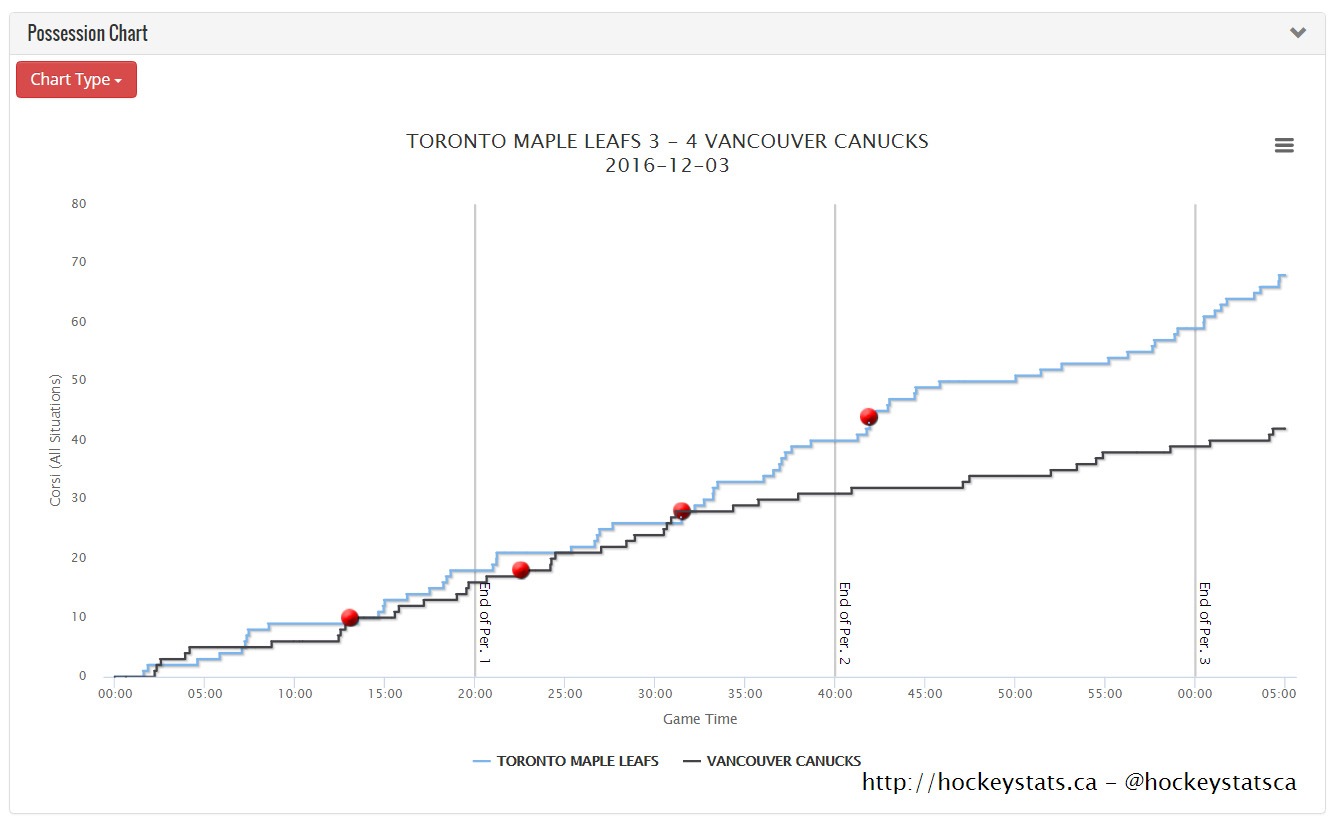 On the attempted shots chart, you can see the Leafs pressed the gas pedal to tie up the game at two, and they didn’t take their foot off until the game ended.

Miller was incredible and the Canucks’ skaters deserve credit too. They – especially the Sedins – put in a better effort than they have in weeks.

With Gudbranson saying Matt Martin was dead and all the talk about the Kadri non-suspension after the November 5 game, everyone knew this was coming.

He did well in the fight, but more impressive, he did well on defence. That’s something we haven’t said much of Gudbranson with the Canucks yet.

Guddy led all Canucks defensemen in even strength corsi and made key plays like this one in the third period.

Maybe the fight woke him up?

Or maybe he just changed his stick tape. Whatever it is, we have to hope this Gudbranson’s here to stay.

If Nazem Kadri is trying to draw a penalty and you’re a ref, does it not cross your mind that he could be embellishing?

He’s pretty much the league’s number-one rat right now. If that’s not enough, the November 5 hit on Daniel has been replayed a million times in the last two days.

You think they’d clue in, is all I’m saying. But here’s Henrik putting his stick up near Kadri’s waist and Kadri just hamming it up for the call.

Kadri chicken winged, pulled the stick up, and basically hooked himself with Hank’s stick.

Did Kesler, Burrows and Lapierre do stuff like this for the Canucks during their heyday? Definitely. But don’t forget how the refs were on the lookout for dives.

Guess they can’t do that to a Toronto player, though.

Like I said earlier, the Canucks skaters put in a great effort for the win.

First, Luca Sbisa did something good.

We don’t usually shy away from showing Sbisa’s mistakes – and it’s fair, because he makes a lot – but on the Canucks first goal, he deserved a ton of credit.

Long gif here, but you can see he had the puck several times before he finally set up Daniel for the goal (at the start of it, he has the puck).

If “Oh no, Sbisa has the puck!” crossed your mind three times during that play, I’m sure you’re not alone. Yet each time, Sbisa made a smart read. The best – his rejection of the shot option and choice to push the puck into the corner to keep the cycle going.

Now, no chance you’re not on board with Stecher already, but here’s another example of why fans love him so much.

Notice him flinging Nylander’s stick out of his way like it’s an fruit fly daring to cross his path?

Here’s a great pass by Burrows, setting up Baertschi for a nice goal.

Baertschi was trying to go forehand-backhand, but he missed, which is probably the reason he scored – still, nice rush from him and Burrows to make this happen.

And speaking of Baertschi and Burrows, their line with Horvat led the Canucks once again as all three had the best corsi-differential on the team.

Horvat, btw, who many are saying will become Vancouver’s number one center, can score in the shootout too – something the Sedins have never been able to do very well.

I won’t belabour this list too much, but check out Larsen in front of his net on Toronto’s game-tying goal.

The way Vancouver deploys Larsen – mostly in offensive situations – shows he’s becoming regarded as a defensive liability. He proves it too whenever he’s trying to get the puck out of his own team’s zone.

Playing him over other options such as Alex Biega (and Stecher to start the season) was only one of many questionable coaching calls on Saturday.

Sutter on the power play and Sutter with the Sedins in general is a combination that is killing the team. Henrik and Daniel were minus-6 and minus-8 in corsi, and Loui Eriksson was minus-17.

These are Vancouver’s three most skilled, highest-paid forwards, being nullified by their linemates.

Twice in the game the Sedins stayed late while Burrows came on for his shift, and they dominated the offensive end.

Keep Burrows on the line with Horvat and Baertschi because they’ve been lethal? Horvat will be fine – he generates his own chances no matter who he’s with. The twins on the other hand – getting them going should be Willie’s first priority.

It’s sad too, because the Sedins were good against the Leafs. They came to play, as they’ve done so many times for HNIC games against Canadian teams. They had a bunch of dominant shifts too, so seeing their efforts go unharnessed and uncapitalized on by playing them with an oddball linemate is depressing.

One more issue: Burrows, one of the Canucks best three or four forwards in the past three weeks, wasn’t given a single shift in overtime. Grandlund, Baertschi, Sutter – all saw the ice.

5. O’Sullivan takes a run at Vancouver

If you missed Patrick O’Sullivan going off on his thoughts on Vancouver on TSN 1050, you need to hear it.

To say the least, it was some childish, pathetic radio work by all parties involved, including the host Scott MacArthur. Here’s how it started:

Let me point this out: why are Vancouver fans even listening to your show? I guess that’s a compliment to you but do they not have their own show to listen to? So that alone tells you, here’s Toronto, if you want good content you’ve gotta look outside where you live, I guess?

Do we have to change the name of the city, Patty, to mini-Toronto-west? Something like that?

Let’s take a quick break here to mention MacArthur was trolling harder than POS. It’s one thing when Americans hockey broadcasters who need ratings act like this (remember the interview where Seguin and Benn went off on the Sedins?), but a Canadian radio guy?

This guy really wants some attention.

POS: Like you said to me off-air, it should be more relaxed. Everyone says there’s similarities between California and B.C., beautiful part of the country, but there’s some people that are wound pretty tight…

… This is kind of a third party view I have – there’s not too many people who enjoy the Canucks or their fans.

What was it about the team?

To me it was, as a player, it seemed like they were just full of rats. They had Matt Cooke too, so, as my career went along, I played for five teams, and every team, even teams in the East couldn’t stand Vancouver.

I thought I was a westcoast guy at heart, and here I am, realizing I’m not… Even with changes in the organization, it’s something in that jersey.

Now they have Derek Dorsett, who in my mind is a slightly more willing Burrows. Until Burrows is gone, because he’s by far the most hated individual in the entire league.

I mean this is a guy who bites people. Literally, biting people’s fingers in scrums, hitting them from behind, spearing guys, he’s just… top to bottom. And he’s a coward. I have my own personal situation with him, but if you talk to other guys, it’s the same thing…

POS spoke again about how Burrows said things about his childhood while chirping him – which explains the root of the longstanding grudge POS has. We’ve heard that before, and we also know Burrows apologized to him for it.

Holding a grudge against an entire city for the comments of one guy, which he’s apologized for since, and acting as if everyone in the NHL feels the same way he does?

Time to grow up, POS.

If I were Canucks management, I’d be loving POS’s radio hit.

That’s because earlier Saturday, Sportsnet published an Q & A with Trevor Linden that didn’t do him or management any favours in the eyes of the fans.

There were a ton of answers that left me shaking my head at Linden’s grasp of the fans and of his ability to point the team in the right direction.

Let’s start with this one:

Is Jacob Markstrom your No. 1 goalie of the future?

We definitely feel he has a chance. The succession plan: Ryan [Miller] may be back next year. We’re not sure. He’s a free agent. Jacob, we feel can be a No. 1 goalie, and we got Demko in Utica. It depends on his development. Goaltenders take a little more time.

That right there is an answer from a person who has no understanding of what his fanbase wants. Not only that, how is the concept of bringing back a 37 year old Ryan Miller, when you’re trying to become a younger, faster team that’s developing a new core, even a consideration?

Elliotte: Any decision on Miller won’t be made until after the season

Need that banging head against the wall gif again, right?

This one was something too:

Perhaps some fans look at Toronto’s rebuild. Very dramatic. Stripping things right down. Getting rid of its best players. There’s a theory out there that the Canucks fan doesn’t have the appetite for an aggressive teardown.

What people fail to realize is the older group of players we had here—the Garrisons and Keslers and Bieksas and Higgins and Hamhuises—which are no longer with us, these are good people. These are leaders. Perhaps in Toronto that wasn’t the case.

We have Daniel and Henrik Sedin here, who are very important to this organization and icons in the city. They’re not going anywhere. I don’t know how I walk into the room and tell these guys, “Strip it down.” I’m not sure it’s fair to these guys.

Wait. First, rebuilding is not possible in Vancouver because the existing team was made up of “good people” and “leaders”? Am I reading this right?

And serious question: did Toronto’s management go into the dressing room and tell Phaneuf and Kessel “strip it down”?

Or did Shanahan and co. realize they were in charge and do what needed to be done? Now, I’m not even saying the Canucks need to bite the bullet and trade the Sedins – just that they do need to start trading current assets for futures.

Holding onto Hamhuis and Vrbata and Matthias and others in the past few seasons… someone might need to let Linden know he doesn’t need the players’ permission to change the makeup of the team.

The man known as Dignooi on Twitter went on a hell of a rant after reading the Linden article on Saturday. His comments were on point and they make you hope whoever is running the team will hear him and other fans and figure things out soon.

I’m not including them all, but here is a string of some of the best tweets. 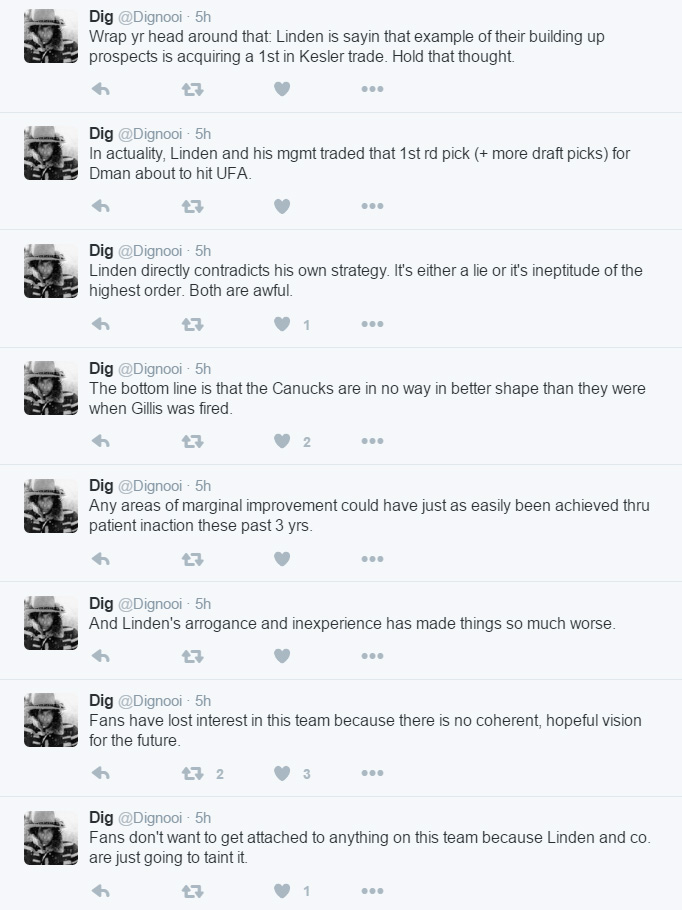 Note: Thanks to Ryan Biech for his gifs and positive attitude